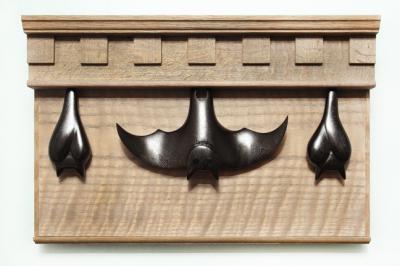 Where do you begin to discuss Steven Dana and his exhibition of recent sculpture? Well, to begin, he had the good sense to marry Heather Gill (Dana), current director of the Cummings Gallery, previously the volunteer coordinator at the Erie Art Museum, and perhaps the nicest and most pleasant person you could find to work with.

Steven Dana is a family man, whose recent insights into nature come via his children. After all, one of the jobs of children is to help the adults in their lives re-discover as the children are discovering for the first time. As he observes: "For them a cicada larva wiggling in the dirt holds the same beauty as a bright red cardinal in a tree."

My first and most obvious observation is that this show is about wood, one half of which has been re-claimed and recycled. Some are weathered natural wood, such as "Spring Bird," which so resonated with someone that it sold even before the show was completely mounted and ready for the opening. On others he has used shellac and various chemicals, dyes, and pigments to create various effects, each pristinely and professionally finished. The quality of the workmanship stands out.

My second and equally obvious observation is that these sculptures are all abstracts, meaning that the artist takes objects found in nature and simplifies them to their most basic and telling features; or as he says, "All the works have been reduced to bare, almost cartoon form." For example, the "Nuthatch" is a carved crescent shape, which would not automatically be recognized as a bird, except for the minimal paint applied to it, which clarifies the form as being avian. There is a very Japanese feel to the bird figures, in some cases an almost Wabi-Sabi quality in the respect for the natural—in "Creeper," he keeps the crack in the wood. There is something of their humor as well—there is a grub hiding from the bird in this same sculpture.

With these various combinations of wood and abstraction, one can read, intended or not, a surprising number of references. His angry cats, for example, remind me of the minimalist vases made in the '70s, though they also resemble objects currently coming out of California. These are my least favorite objects in the show with their novelty-store look in bright candy colors. Interestingly, they started as a project to reclaim old bowling pins, which he abandoned when he found that many are hollow inside, making turning them on a lathe dangerous.  His highly symmetrical bat motifs, on the other hand, have something of the Halloween decoration about them.

Personally, I found the series of feminine figures the most interesting in terms of contemplating historical references and influences. I immediately made a connection with Alberto Giacometti's standing female figures. However Giacometti's work lends itself to a feeling of isolation and loneliness, whereas these are warm and inviting and even more abstract than Giacometti. Then, too, they strangely reminded me of Paleolithic Venus figures and the Cycladic Plank Goddesses. As it happens, they are in fact inspired by the heated and stretched pop bottle craft that could often be seen demonstrated at various state and county fairs or found in novelty stores in the '70s. That they were intended to evoke the female form, or at least that the artist recognized the potential suggestion of it, is reflected in such titles as "Two Sisters."

He began these pieces on the lathe but finished them by hand so as to not make them look overly symmetrical and machine made. "Fall Figure 1" is perhaps the most extreme case, but there is a pleasant sway to the work. All are finished in glowing natural looking varnishes, which range in color from honey deep burgundy. All of the stands are equally thought out and finished to the quality of the rest of the piece.

Apart from the workmanship and artistic vision, the show has variety, yet the pieces are all interconnected and obviously of one artist. The shapes of the cats relate to the female figures, whose lustrous finishes relate to the beehives and owls, whose abstractions complement the natural wood birds. It is a cohesive whole, whimsical, skillfully crafted, and well worth seeing.

This exhibition continues until May 27 at the Ronald E. Holstein Gallery (Erie Art Museum Frame Shop located at 423 State St.); hours: Tuesday through Friday 9 a.m. to 5 p.m. and Saturday 11 a.m. to 5 p.m.