Luke Gehring's back with a review of Surrealist James Vredevoogd's exhibition at Glass Growers Gallery. 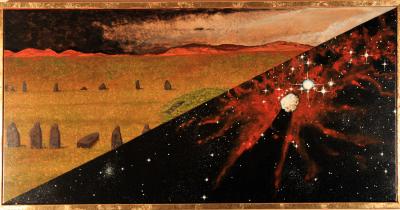 As Mark Twain might say, the rumors of the death of Surrealism have been greatly exaggerated. It began in the 1920s, about the same time as Cubism, but greatly outlived Cubism as a continuing movement.

Originally, the stated aims of the Surrealists were to explore the reality behind reality. In the "Surrealist Manifesto," French poet André Breton stated that the intention was to resolve the subconscious and conscious into one reality – a super-reality.

This led especially to interest in dreams and psychoanalysis, as well as automatic writing, and often a dash of recreational drugs for good measure. While other movements were actively divorcing art from any human reference, Surrealists were going back to the human, though going past the appearance of the form to the personal experience of the psyche. Consequently, there are as many kinds of Surrealism as there are Surrealists.

This particular Surrealist, James Vredevoogd, is a professor emeritus of Edinboro University of Pennsylvania, and has taught painting, drawing, and performance art for 32 years. "This is quite an honor to have in the gallery," Deborah Vahanian tells me. "He is so amazingly dynamic at the age of 75-plus – performance art and all. His reference is so scholarly and so fascinating."

Mr. Vredevoogd's paintings lie somewhere between the precisely rendered dream landscapes of Salvador Dali and the brushy folk-tale images of Marc Chagall. His work more closely resembles Russian Surrealism, such as the art of Vladimir Kush, which seems most evident to me in pieces like "Portrait: Brazil," and "The Island of Duality."

Like many of his processors, Mr. Vredevoogd creates dream imagery, such as "Horseman," where the straddling horseman isn't astride a horse, but using rickety sapling stilts terminating in chicken feet. He may be as intent as one of the four horsemen of the Apocalypse, but his conveyance is so precarious that success in his marauding endeavor seems something less than assured.

The artist's interest in world mythology, as well as explanations surrounding death's journey, can be seen in "The Baroque." Take the image of Charon – the ferryman who takes the newly departed souls across the river Styx to Hades in Greek mythology. This ferryman commands more a flying rowboat than an actual baroque. And as the picture plane is divided into four, each representing a different place and time – ancient Greek, Celtic, Syrian, and Nordic – the various pieces of the craft, their designs, and the landscapes or color schemes do not match up. The particulars differ and beliefs vary, but in the end the experience is the same.

I believe my first experience with the work of Mr. Vredevoogd was at this year's Friends of Mercyhurst University exhibition, where, as I was taking notes for an upcoming review, I kept coming back to the two surrealist canvases. Like the paintings at Glass Growers Gallery, I was enchanted with the contemporary storybook-like quality of these compositions, the use of color and the surreal balance between dream and nightmare. What bothered me, and the reason for ultimately excluding them from that review, was that they really felt like they needed to be more tight and precise, especially when dealing with such things as checkerboard or grid patterns. My criticisms, both positive – as in "The Man In Black Turns" – and negative – as in "Landscape with Figures" – to some degree apply here.

Nonetheless, at a time where there is a lot of weak and even pretentious Surrealism floating around, the chance to see these quality dreamscapes should not be missed.