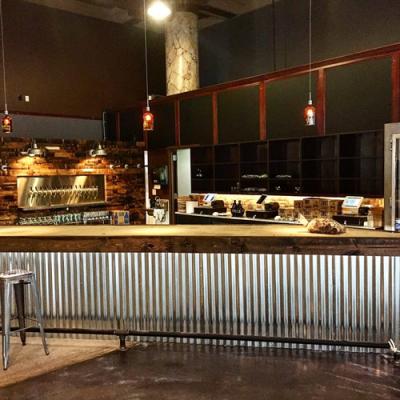 Downtown Erie was the place to be on Saturday, Sept. 17. The whole city seemed to come out for the grand opening of Voodoo Brewery's newest location in the Boston Store building. It was a celebration of Voodoo's success, and a turning point for both local business and State Street.

In 2012, when CEO Matt Rachocki purchased Voodoo – now in its ninth year – with the help of a crowdfunding campaign, the brewery was facing the prospect of bankruptcy. However, Rachocki felt "the business had great potential," and the Fairview, Pennsylvania native jumped at the chance to make a difference in his hometown. While it was always his plan to make his way back to Erie to raise his family, the opportunity to take on the challenge of running a brewery gave Rachocki a reason to leave New York City behind, and begin working in earnest in northwestern Pennsylvania.

Critics of the region lament the brain drain effect – when 18- to 25-year-olds leave their hometowns after high school or college. However, in many regions, 30- to 49-year-olds and their young children are moving back, contributing to a phenomenon known as brain gain. Rachocki and his family are examples of the latter trend.

Since Rachocki took the reins at Voodoo, and after the introduction of their employee-owned program, the brewery has flourished. After opening locations in Pittsburgh and Meadville, and launching two food trucks ("Foodoo," of course), Erie was the next logical step.

Erie is no stranger to craft breweries, however, having seen several other microbreweries open in recent years.

According to journalist Tali Arbel, "The arrival of a craft brewery [is] often one of the first signs that a neighborhood [is] changing." For Erie's future, the recent expansion in our local beer scene is a hopeful sign of good things on the horizon.

According to journalist Tali Arbel, "The arrival of a craft brewery [is] often one of the first signs that a neighborhood [is] changing." For Erie's future, the recent expansion in our local beer scene is a hopeful sign of good things on the horizon.

Rachocki needed to find the perfect location for Voodoo's Erie branch. After a series of unsuccessful efforts to find a fitting use for the former department store-turned-restaurant, Voodoo Brewery is finally bringing life and activity back to the iconic storefront.

Besides the remarkable size of the space itself, including a patio and sidewalk dining, the next thing that captures the eye is the the artwork on the walls – from monster murals to abstract graffiti to chalkboard-wall menus, there isn't a corner that hasn't been graced by the talented hands of the Voodoo crew. The use of reclaimed pieces, such as pallets for all the tables and patio seating, give it an urban-industrial, underground theme – all contributing to a familiar vibe for fans of the Voodoo brand, and a fun-loving but sophisticated update on the classic barroom look.

On the night of the grand opening, the house was packed. According to Rachocki, there were 11 bartenders, but "you can only have so many people pouring beer." Despite the lines, service was still friendly and speedy – no one was without a beer in hand for too long. A steady stream of delicious smells from the kitchen made their way through the space as patrons happily enjoyed good food, good beer, and good vibes (which, appropriately, is the name of a Voodoo beer).

Rachocki said he "couldn't be happier" with the turnout on opening night, and that "Erie really came and supported [us]."

Stay current on Voodoo's social media pages for exciting updates and all the mouth-watering menu changes.

Ella Julian can be contacted at EJulian@eriereader.com.