Wake Me Up Before You Yo-Yo

… at the Pennsylvania Yo-Yo Slam 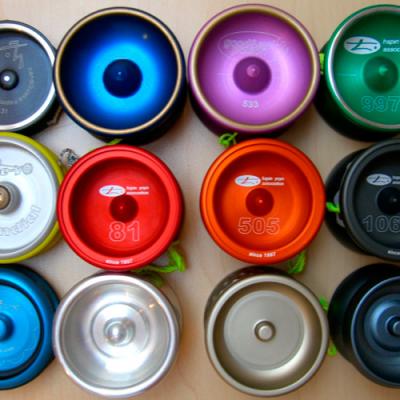 Walking the dog or cradling a cat is not unheard of on a late autumn afternoon. Nor is engaging either of these activities at Erie's Bayfront Convention Center – after all, it has played host to American Kennel Club events before. But if you're expecting a pet show there on the afternoon of November 21st, you're in for a shock – there will be no Yorkies, only yo-yos when the Pennsylvania Yo-Yo Slam returns to town for a third consecutive year. Nonetheless, the skills on display take hours upon hours of meticulous grooming.

"The tricks that these young adults are doing, they evolve every year. These people aren't just walking the dog [a basic trick in which the yo-yo hovers just above the floor beside the leg] anymore. They're doing cool things that you didn't even know could be done with a yo-yo," says Emily Biddle, communications director of the Erie Sports Commission.

Like Biddle, I was previously an outsider to the yo-yo tournament, which has elevated this ancient toy to modern performance art. Where and when the yo-yo originated is a matter of dispute among historians, with some claiming it was a spinoff of the Chinese diabolo (another still-existent skill toy) and others attributing it to the Greeks. Among those backing the Greeks as the inventors, some contend yo-yos were merely spools for thread or hanging drapes, a mother's instrument rather than a child's. Others point to a painting on a Grecian vase depicting a boy that appears to be playing with a yo-yo. All antiquity has left us is a static image, so all we can do is make assumptions (for the lack/impracticality of terra cotta animation panels).

Drape-hanging apparatuses are fun and all, but men like Filipino businessman Pedro Flores were wise in recognizing the yo-yo's potential as a plaything. Flores immigrated to the U.S. in 1928 with a revised design, wherein the string was looped around the axle rather than tied. With this innovation came what many consider the godfather of yo-yo tricks, The Sleeper. By tugging ever so slightly near the bottom of the throw, the string catches on the axle and allows the yo-yo to "sleep," or continue spinning at its current height, instead of snapping back into the palm. As a slumbering roommate is the ideal canvas for freestyle cosmetologists, a slumbering yo-yo is the ideal starting point for freestyle string-choreographers.

Freestyle routines are that the axle which tournaments like Yo-Yo Slam revolve around and they are limited only by the imagination and talent level of the performers. Some spin two yo-yos simultaneously, weaving their bodies in and out of the yo-yos' trajectories like a scene from a Matrix movie. Others dabble with ratios (e.g., two yo-yos to one string) or opt to go no strings attached, snatching yo-yos out of midair like a gecko snagging his breakfast. It is impressive to behold, especially if you've never witnessed it before.

Mitch Silver, tournament organizer and owner of Fairview skill toy superstore YoYoSam, is hoping for increased visibility for this Yo-Yo Slam by introducing a more TV-friendly format. "At Yo-Yo Slam, we buck the [National Yo-Yo Association] system in favor of presentation and viewership … It turned the community upside down - some people are very angry about this. But a couple years from now, it should be the premier format for yo-yo competition."

Why are yo-yo vets so wound up about Yo-Yo Slam? First of all, there will be live scoring and feedback from the judges, so both players and viewers can track their progress and evaluate their chances in real-time. In traditional yo-yo contests, no one knows the results until the very end. The second and perhaps most radical departure from the norm is the addition of audience voting to the final round. The spectator vote is of equal weight to each of the three judges at 25 percent, which "heightens the drama and challenges players to ham it up and play to the audience."

Pressure, fates hanging tenuously by a string – this has been the cornerstone of human entertainment for millennia, particularly since the advent of reality television. The structure and construction of the yo-yo has received several tweaks over time, especially within the past 30 years or so. In the early 80's, the Yomega Brain was released, featuring a revolutionary clutch-driven auto-return system. The clutch grabs the string as the yo-yo spins down, returning it to the player. This helped cultivate an entire generation of new players because it is more forgiving to novices. The materials yo-yos are formed from have likewise been upgraded, with top-flight versions containing up to 75 percent aircraft-grade aluminum and costing upwards of $200 (Silver has done his part to make aluminum yoy-os more affordable with his Yoyo Zeekio brand and Skill Toy Supply wholesaler).

The constitution of the competitor remains a constant, however. "The competition circuit is – well, competitive," says Silver. "It can be intimidating [for beginners]." He doesn't expect more than 55 yo-yoers to turn out for the tourney, approximately 35 professionals and another 20 amateurs. Past audiences have numbered about 200, but he is positive that the new format will draw bigger crowds – and spawn bigger shows (via sponsorships) in the future.

What goes around, comes around, so come on down to the Bayfront Convention Center on November 21st (it's free, too, so it won't pull on your purse-strings).