Godzilla vs. Kong is very dumb but occasionally entertainin 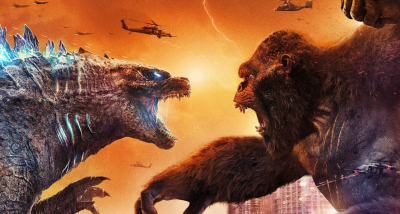 Legendary Entertainment's so-called "Monsterverse" has been the strangest cinematic universe to date. After a somber and fairly serious beginning with Gareth Edwards' Godzilla, the series has followed Toho's lead and made every subsequent film increasingly dumber and sillier. This all culminates with Adam Wingard's (You're Next, The Guest) Godzilla vs. Kong, which might just be the dumbest and silliest one yet. The film is loud and obnoxious, the story is incomprehensible, and the action wears tiresome. However, there are some unexpected pleasures to be found in just how far it's willing to go with its ridiculous premise.

After being discovered on Skull Island, Kong has been living safely these last decades under Monarch supervision. But when an Apex CEO learns about a possible new power source below the surface of the earth, he puts together a team of scientists to look for it with Kong guiding them there. This attracts Godzilla to them as he is compelled to destroy Kong and the two find themselves in the fight of their lives.

The story is a convoluted mess with sinister corporate conspiracies, ancient legends, a little girl with an almost psychic connection to Kong, and a secret world that exists at the center of the earth. That said, we came to this film for the monster fight and it mostly delivers. Godzilla, Kong, and an unexpected third monster late in the film all have distinct personalities and it's fun watching how each one comes up with ways to pound on the other. It's a lot of stupid fun but the fun lies in seeing just how far the stupid is willing to go.