Fitted with new rehearsal hall and loads of upgrades, Erie treasure to return in December 2021 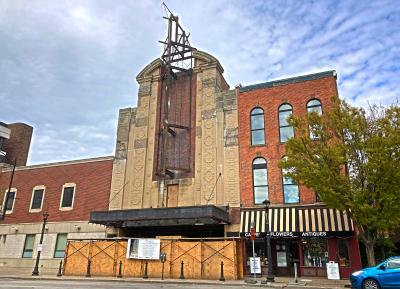 "Watch the eyes of a child as it enters the portals of our great theatres and treads the pathways into fairyland. Watch the bright light in the eyes of the tired shopgirl who hurries noiselessly over the carpets and sighs with satisfaction as she walks amid furnishings that once delighted the hearts of queens. See the tail-worn father whose dreams have never come true, and look inside his heart as he finds strength and rest within the theatre. There you have the answer to why Motion Picture Palaces are so palatial."

Dating back to its grand opening on April 10, 1931, Erie's Warner Theatre had always been intended as a great escape. Its opulent interior drew heavily from Art Deco and French Imperial styles, with just a touch of Tutankhamen (King Tut's tomb was discovered in the 1920s, making Ancient Egypt quite fashionable). Its employees, under the direct employ of Warner Bros. Studios in Hollywood, regaled patrons with their entertaining chops. For Ra's sake, it even boasted air conditioning — a contrivance unbeknownst to most at the time. To be at the Warner was to be somewhere else, and through the Great Depression into the war years, that was exactly what people wanted.

But although the Warner has reliably provided an escape over the past nine decades, it could not itself escape the demands of changing times. It served beautifully as a "motion picture palace" (Warner Bros. films and others after a 1948 federal antitrust lawsuit) for its first 40 years — but the emergence of large cinema multiplexes in the 1970s nearly proved its undoing. After being sold to CiNENET Corp. in 1973 and an unsuccessful run showing B and C movies, CiNENET was prepared to cut its losses and commit the historic building to the wrecking ball. Thankfully, then-Mayor Lou Tullio intervened, and convinced the Commonwealth of Pennsylvania to purchase the Warner.

The Warner escaped its near-certain doom because Tullio and others recognized its merits and history as a presentation house — a designation that encompassed more than film. Although the theater had hosted vaudeville acts and other live performances during its first act, it was the Erie Philharmonic's adoption of the Warner as a performing space in the '70s that really galvanized preservation efforts. In 1977, Tullio formed the Erie Civic Center Authority to operate the Warner Theatre, and in 1981, it hosted its first Broadway show after some minor updates to get the building up to code.

However, an inevitable consequence of raising a facility's profile is that of comparison. As far as character goes, Erie's Warner was virtually peerless — other Warner Theatres were constructed in the early 20th century, but of those only five remain intact (with Youngstown, Ohio's Powers Auditorium the closest to our motion picture palace in aesthetic). In 1992, when the Erie Metro Cultural Planning Committee declared the Warner Theatre the top priority of the arts community, they brought in leading theater architects from major cities all over the country, all of whom were spellbound by how much of its original majesty remained. Still, all knew it was sorely lacking in modern amenities.

By the end of 2021, the Warner will have comfortably broken free of the "inadequate" label with a fully-equipped modern theater facility, the culmination of a renovation project that began all the way back in 2002. That's when plaster, gold leaf, tapestries, and other surfaces were thoroughly cleaned and restored and the roof was replaced (Phase 1).

The following year, new seating — a re-creation of the theater's original seating — was installed in a configuration better suited to audience comfort and maneuverability (Phase 2). Also in 2003, the Erie County Convention Center Authority (ECCCA) purchased the adjacent National City Bank Building, which was integrated into the complex for additional restrooms, bar areas, conference rooms, and offices. Vintage movie posters from the Warner's early days (framed and arranged by the Erie Art Museum) hang on its walls to impart the requisite charm. And thus fulfilled Phase 3.

The fourth and final phase, as should be quite clear, has had difficulty evading delay after delay. The biggest holdup was the acquisition of the property behind the theater — although the ECCCA held a 99-year lease on that parcel (owned by the National City Development Corporation, who manages the neighboring Mid City Towers apartments), the Commonwealth (who owns the Warner) would not approve construction on land it doesn't own. Therefore, the ECCCA was forced to wait for the HUD mortgage on that property to fully mature before purchasing.

Of course, the price tag for planning, labor, and materials only go up over time, so construction bids were consistently coming in $10 million over the set budget of $16.5 million — $11 million in state funding, $3.5 million from the Warner Theatre Preservation Trust established by former Gov. Tom Ridge in 1997, and $2 million raised by Erie Events. Just before the bids expired in February of 2020, another $3 million in corporate donations helped rescue the project from limbo. The planned relocation of the Erie Philharmonic's 2020-21 concert season to the Erie Insurance Arena (which never happened in-person due to the COVID-19 pandemic) helped close the budget gap, as crews have been allowed to work continuously toward a projected completion of December 2021.

For those wondering, the iconic Warner Theatre marquee will be back to shine upon State Street once again. It will be an exact replica of the 1931 original, with certain elements (such as the antique Tiffany glass) being restored and others being replaced.

Those passing underneath the marquee into the lobby will notice little difference in aesthetic. Once they sit down for a performance, however, the difference in experience should be obvious. A newly installed orchestra shell and state-of-the-art, in-house sound system will provide acoustics previously unmatched in Warner history. Underneath the stage, a trap system will allow for a much fuller complement of theatrical effects. The stage itself will be expanded by 15 feet, and equipped with an orchestra pit lift that can be raised or lowered, supporting various symphonic configurations. Meanwhile, the available electrical supply to the stage is being quadrupled, generating a foundation for some of professional theater's flashiest shows.

Behind the scenes, drastically enhanced accommodations should encourage bigger and better productions to not only stop by, but to stick around a while. These include:

The pièce de résistance of the project, though, is the construction of the two-story rehearsal hall that will sit above the loading dock on East Ninth. This contemporary but intimate space will have its own dedicated entrance, ticketing area, lobby, restrooms, and bar area for small gatherings and receptions. Offset barrel-vaulted ceilings will offer exceptional acoustics, while a gallery-style overlook will feed into the classy atmosphere. It is expected to accommodate crowds of up to 400, and will be programmed for both performances and art education throughout the year, independent of or supplementary to whatever's transpiring on the Warner's main stage.

The brand new rehearsal hall will be connected to the existing Warner foyer by means of an outdoor link running alongside the building on French Street, enclosed in clear glass. Eventually, a video wall on the French Street side of the rehearsal hall will show movies and broadcast sold-out events to public spectators on the lawn outside Erie Insurance Arena. Between the arena, UPMC Park, and the Warner complex, summer nights in Downtown Erie's Sports and Entertainment District should have no shortage of lights, camera, and/or action post-pandemic.

It's an escape we can most certainly look forward to.

Special thanks to the Erie County Historical Society and Erie County Convention Center Authority executive director Casey Wells for their Zoom presentation "The Warner Theatre: Past, Present, and Future," from which this article has been adapted.

Matt Swanseger's favorite Warner Theatre memory was losing his tassel during Collegiate Academy's graduation ceremony in 2005. If by chance you have it, reach out at mswanseger@eriereader.com