What Can We Learn From History About the 2016 Election?

A conversation with Doris Kearns Goodwin 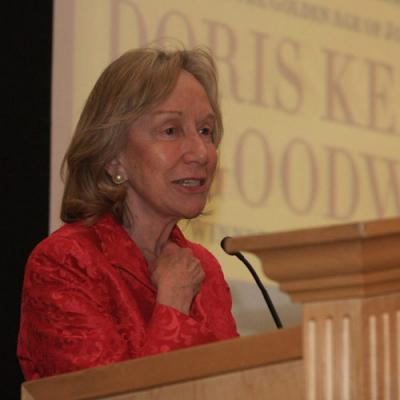 Winston Churchill had extremely bizarre sleeping habits. And he used to drive Franklin and Eleanor Roosevelt crazy on account of them.

During WWII, the British Prime Minister made long visits to the White House, where he was often known to drink brandy until 3 a.m. and to disappear for an afternoon nap without telling anyone. FDR found it tough to keep up with him, and his staff often struggled to respond to his erratic schedule.

It's strange, intimate details like this one that make presidential historian Doris Kearns Goodwin's work so compelling. The anecdote comes from 1994's No Ordinary Time, her Pulitzer Prize-winning account of the FDR administration during the Second World War. More recently, her epic Lincoln biography, 2006's Team of Rivals, compelled superfan Barack Obama to choose Hillary Clinton as his Secretary of State. But its influence doesn't stop there – it was also the catalyst for Steven Spielberg's appropriately-named biopic Lincoln in 2012.

I spoke with Kearns Goodwin, who will soon be in town for the Jefferson Educational Society's Global Summit, by phone in late October. We chatted about the current election, The Daily Show, populism, conspiracy theories, and the dangers of partisan gridlock. Our conversation has been edited for clarity and length.

Dan Schank: Can you tell us a bit about your correspondence (and friendship) with President Obama?

Doris Kearns Goodwin: In 2007, sometime in the early stages of the nomination battle with Hillary, I got a call on my cell phone. And he said: "Hello. This is Barack Obama. I've just read Team of Rivals and we have to talk." He was interested in the emotional intelligence of Lincoln – how he was able to put past hurts behind him, and how he was able to stamp down jealousy and envy.

I went to talk to him in the Senate office building, and that began a relationship that developed during his presidency. I became involved with a group of historians who went to the White House every now and then to give him advice. We'd go as Truman, Jackson, Jefferson, or LBJ historians, to bring our thoughts into the dining room with him at a small dinner. And we'd advise him on whatever problems he was facing at the time.

When he won the nomination, he was really reading up on Lincoln (not just because of my book but because of others as well) and someone asked him if he would really be willing to put a chief rival into his inner circle – even if his or her thoughts were an occasional pain in the butt. And he referenced Lincoln, saying that if the country's in peril, and these are the strongest available people in the country, then yes, he would put these rivals in his cabinet.

DS: Now that your scholarship has directly influenced public policy, has it changed the way you work?

DKG: When the impeachment happened with Bill Clinton, the television networks turned to historians to deal with this incredible issue. So that was probably the first time, at least in my generation, that a lot of historians were talking publicly about history on television.

What has been fun for me about it – and helpful – is that when you spend 10 years writing a book on Lincoln, or six years writing one on Franklin and Eleanor Roosevelt, to be able to go on television for a few minutes allows you to have an outlet for your thoughts about the current day. And I'm always trying to bring history to bear on the current situation.

When Jon Stewart first asked me to be on The Daily Show, it was really scary. And my children said, "You have to!" Because they watched him, obviously, and they got some of their news from him.

I remember still that he came down the corridor, and he had made up a song about me to put me at ease. And he said that each time I came on, there would be another verse added to the song. So I just felt totally relaxed.

And it is fun to reach people that way because if I go to speak at colleges, there will be people who know me from television rather than from having read these long books.

DS: You've written extensively about populist presidents like the Roosevelts and Lyndon Johnson. Could you talk about the role of populist rhetoric in the current presidential race?

DKG: The fact that Bernie Sanders reached such a large following – and obviously Trump has, too – shows that there are concerns. A segment of the country, especially in the working class where jobs have been taken away by technology or globalization, feel that they haven't been looked after.

It reminds me of what happened at the turn of the 20th century when the industrial revolution had shaken up the economy. Then, it was people on the farms feeling that, as people were migrating to the cities, they were being left out of the process, that immigration was taking their jobs, that a gap was growing between the rich and the poor ... and they were nervous about where the country was going. I think a lot of those feelings are replicated today because of the changing economy.

But then the question is: What do you do about it? And that requires real solutions, not just rhetoric. That's what Teddy Roosevelt was able to do. There was a lot of populist rhetoric in the 1890s, and then when he got into office as a progressive, he was able to mobilize the Congress to change the working hours for women and children, to deal with the exploitation in the factories, and to deal with big companies swallowing up small companies. It requires political skill as well as rhetorical skill if you want something to happen.

DS: How do you think Hillary Clinton can respond to today's populism?

DKG: One of the things Teddy Roosevelt did was to get out of Washington. He actually took train tours for six weeks in the spring and six in the fall. He knew that he had to hear, on a local level, what people were feeling. Somehow a train seemed a wonderful way to do that. Because they go through small villages as well as cities, he could meet with people along the way.

I've often thought that the trouble with today's transportation is that you can fly in and fly out. You're not getting a sense of how the local people are truly feeling. One wild thought might be to take regular train rides to feel what the country is feeling. I think she'll need to really keep in touch with that popular sentiment outside of Washington.

The other thing, obviously, would be to reach across the aisle and have more congresspeople and senators to the White House, like LBJ used to, to ensure that you've made the best effort to spend time with them.

DS: The Trump candidacy has attracted an unusual amount of misinformation, including outright conspiracy theories. Can you talk about the history of misleading information and its influence on presidential campaigns?

DKG: In contrast to a time when you had three television networks who pretty much agreed on the facts, now because of the polarized cable structure – and because people are listening to like-minded people for what they want to hear – you have a fractured sense of what's true and what's not. And even if facts get checked, it doesn't matter. That makes it much harder to govern, when there is such a split between what different people perceive as reality.

It seems to me that this has happened more in this election than it has since the 1850s, when the country was splitting apart between North and South. In my lifetime, it's been as difficult in this election as I've seen it.

DS: So the 1850s are the closest correlation?

DKG: People always ask me if there's solace in history. And I say, "Well, it may not give you solace that it was worse in the 1850s leading up to a Civil War!" (laughs) For example, when Charles Sumner was dinged over the head by a southern congressman, he was out of the Senate for two years. It was a brutal assault. He was heroized in the North, and the southern congressman who assaulted him was heroized in the South.

I don't think we're at that stage now. But it's dangerous when you have a campaign where the dialogue is so much coarser than it has been in recent times. Now young children are hearing discourse during these debates – and afterward on television – that has to be affecting the way we think about politics and the country.

"There is so much stuff out there today – on the internet, in various places – that people can pull anything from anywhere. And even if you say 'That's not factually true,' there's always yet another article that says it is."

Another issue is that there is so much stuff out there today – on the internet, in various places – that people can pull anything from anywhere. And even if you say "That's not factually true," there's always yet another article that says it is. If you're so used to people throwing around expert opinions from somebody-or-other, you don't know how to make sense of them all.

It used to be that people had figures – political leaders, or people like Walter Cronkite in the old days –where you had a sense of trust in their authority. But I'm not sure that those figures exist in the same way that they used to. So you're just left on your own to mediate this whole thing, and it's very hard. The more information we have, sometimes the less we know, because there's no way to filter it.