What's in Your Head?: Zombi Child is a Fascinating Spin on a Familiar Movie Monster 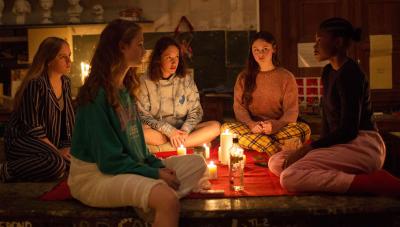 In a recent review, I mentioned that zombies have been used as metaphors for just about everything under the sun. However, there was one aspect about them that I missed: their importance in Haitian folklore and their connection to the religion of Haiti. Bertrand Bonello's (Nocturama) new film Zombi Child seeks to understand the connection between the historic zombie of Haiti and the movie monster that the white world has turned it into. The result is an uneven, but ultimately rewarding message about cultural appropriation.

The film is two stories told simultaneously. Beginning in Haiti in 1962, a man is brought back from the dead to work in the sugarcane fields, but his memories of his old life compel him to escape and reconnect with his lost love. Meanwhile, in modern-day France, his granddaughter Melissa (Wislanda Louimat) has befriended a group of girls who are initially intrigued by her tales of zombies and Haitian voodoo practices. But one girl (Louise Labeque) thinks that voodoo can cure her recent relationship problems.

The film contains multiple references to classic horror from Carrie to The Exorcist but especially the 1943 Jacques Tourneur/Val Lewton masterpiece I Walked with a Zombie. However, it expands that film's themes by having voodoo be just another part of the main character's culture and admonishing her white friends' cluelessness and condescending fascination. Sadly, this gets negated slightly when Bonello takes things into a surrealist, horror-inspired finale of his own. Zombi Child has a lot to say and it doesn't all get communicated properly, but that ambition is admirable on its own. Zombie Child is currently available for free on Criterion Channel and to rent on Vudu.