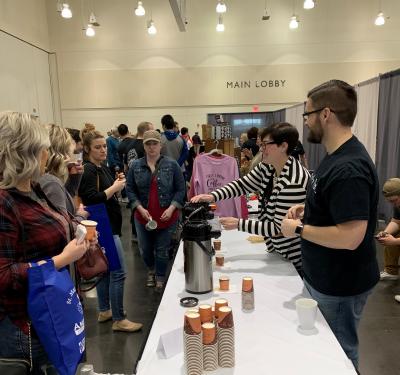 There is something about coffee — as one of those life-giving, soul-sustaining beverages — that makes people want to gather around, socialize and enjoy the moment, sip by sip.

That's why it is the perfect potable around which the St. Martin Center, Inc., in conjunction with sponsor and partner Mill Creek Coffee Company, has chosen to build its big annual fundraiser.

"It took us a few years to get Erie's Best Coffee started," said David Gonzalez, CEO (and Chief Coffee Drinker) at the St. Martin Center. Now in its fifth year, the event has grown exponentially, with activities for all ages and a dedicated organizing committee that has listened to past attendees and their suggestions.

"The first couple of years we had seven to eight vendors. The last two years we have had 13," Gonzalez said. "We started with a few hundred attendees and had our highest participation last year with 540 people. We have expanded the event's location multiple times in order to accommodate the growth."

"People in Erie love to get out, eat and participate … and we're a caring community. The fact that the event is tied to a charity gives it a special appeal," Gonzalez remarked.

Give your caffeine dependence full reign and support the furthering of the St. Martin Center's mission and their good works in our great city.