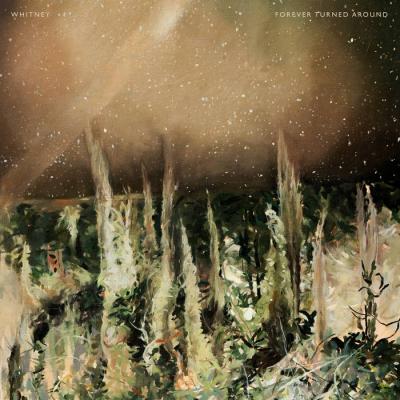 Whitney's sophomore album, Forever Turned Around, is less immediate than their acclaimed debut, Light Upon the Lake, but potentially stronger in every way. Sonically and lyrically, these songs feature depth and texture that will reward repeat listeners. Simultaneously, and in the least backhanded way possible: Forever Turned Around is some of the most excellent, feel-good background music available. The band's warm, '70s-revival brand of "country-soul" genuinely feels made to be played while driving or at summer BBQs. There are moments that will tug on your ears if you listen for them; longing heartbreak lives throughout the record. "You're the only one I want, even when you're giving up," sings Julien Erlich on "Giving Up." And later, on the album's title track, he marvels at how a long-term relationship could have dissipated right in front of him. But elsewhere, on songs like "Rhododendron" and "Friend of Mine," Whitney simply exists to conjure wistful, proficient tunes with a rustic tinge. It all sounds a bit worse than it actually is, but Whitney truly exist in a realm of their own. They must be heard to be believed.