Who the Heck is Teddy Rankin? 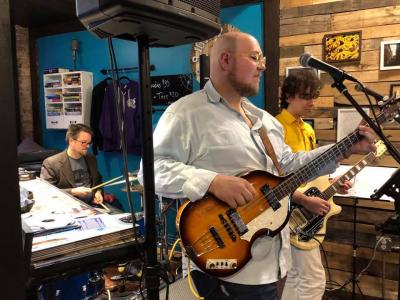 Contributed
Erie singer-songwriter Teddy Rankin's Hofner bass closely resembles that of one of his idols, Paul McCartney. His effortless grasp of melodicism is attributable to both nature and nurture u2014 his father Glenn, also a musician, played Beatles records for him while traveling to Pittsburgh Children's Hospital for cancer treatments.

The coffee machine groaned and glasses clanged together. More people rushed in from out in the cold. Smiles flashed. Lamps flickered. Wooden floorboards creaked. Hushed voices and small utterances gave way to the low moan that diffused through the venue.

And just as quickly as it came to life, everything went silent.

He started with a gentle croon — smooth yet vibrant, like watercolors seeping into a white canvas. The art spoke for itself, painting a picture with every line.

It is not just his voice that sets Rankin apart, though. Described by local musician and Erie Reader contributor Aaron Mook as "a musical chameleon," Teddy is able to pick up a variety of instruments and begin playing a melody as if it were second nature.

In order to find his sound, Teddy recently embarked on a journey of self-discovery through music.

After releasing his first solo album in 2016, Rankin began to play in venues around Erie as much as possible. He is currently part of a band known as The Jeebies, working on a musical project named "Crooner" and on top of it all, he has just released his latest album: Who the Heck is Teddy Rankin?

His newest music reflects the hardships he had to go through in order to get where he is now.

"It all began when I was 10 years old," Rankin said. "I was diagnosed with stage three Hodgkin lymphoma."

Ten years ago, when he was told he was in remission, Teddy was just thinking about being a normal kid again. He was excited to get back to school full time and be with friends, but he still had a ways to go. It was not the numerous rounds of chemotherapy and radiation Rankin endured that stuck out in his memory, but the car rides to and from Pittsburgh Children's Hospital with his father, Glenn Rankin.

They would listen to The Beatles to help take Teddy's mind off of his treatments, as well as the fear and sadness that came with childhood cancer. It was during these car rides that Teddy's love for music blossomed. He found a particular love for The Beatles, which stayed with him through his teenage years and now into young adulthood.

Soon after the car rides with his dad began, Teddy picked up the bass guitar and began playing music, serving as an escape from anything life threw at him.

"From an early age, that was part of me being able to cope with that and I think music then became what I use to cope with any other difficult time in my life," Rankin said. "So, moving forward, whenever I needed some kind of therapy, writing music and playing music was just really important for me."

Teddy's father served as an inspiration for him as well. Teddy recalled the concerts the two would put on together in the living room.

Growing up, Teddy watched his father perform in the family's common space, and around the age of 12 or 13, Teddy joined him. Eventually they would perform together, from their local church to full-blown sets at venues downtown.

"He has taught me a lot about musicianship like how to add tasteful accents and the subtleties of harmonizing," Teddy said. "He also passed along a bit of his perfectionist gene, which makes me always strive to be better but also admittedly difficult to work with."

With a chuckle, Rankin said, "When we were first starting, he was a little tough on me and he gives me what I call the 'look' when I mess up. Now I don't give him the look, but there are times when I could."

During high school, music was put on the back burner, as he was constantly told his dreams of being a musician were unrealistic.

"The answers that were given to me were 'That's not attainable so you should try to be a teacher,'" Teddy said.

Convinced by his counselors in school that he needed a different career path, Rankin began attending Gannon University as an education major in 2016.

School took a toll on him, though, as his mental health declined. Overcome with anxiety and depression, he spiraled into a dark place.

"At a particularly low point I wasn't writing at all," Teddy said. "I was feeling frustrated that I wasn't doing what I'm passionate about and I was feeling a lot of pressure, mostly self-inflicted, to follow a path that was more conventional but where I didn't feel that I belonged."

As his condition deteriorated, the unthinkable happened in August of 2017 when his father was diagnosed with stage four Non-Hodgkin lymphoma.

"Even though he played it extremely cool there was near-constant concern," Teddy said. "It was a shift in the atmosphere that put a new filter over everything. It was hard for me to find space in my head for all of the things that needed to live up there, so I started doing really poorly in school."

His father is now in full remission and plays locally a few times a week, with his duo Rankin and [Dan] Schell. Teddy said playing with his father is even more special now because of his close call with cancer.

"It's an unspoken thing but the greatest life lessons I've learned from my dad come from glimmers of moments in songs when we harmonize just right," Teddy said. "It happens when our eyes are closed, and we're completely focused. Two people understanding each other and being exactly in the moment."

"Life is really unpredictable and you gotta do what you love with the time that you have, and for me, the only thing that makes sense is to play music as much as I can."

"I feel lost and like I don't know what my purpose is, but I know I feel better when I make music. I think about how I am a cancer survivor and I've been given this extra time. I want to make every second count. I hope I'm doing that."
Teddy Rankin

"As a longtime collaborator, one of the great conversations I've had with Teddy is about how he's learning to lose a little bit of control over his music," Mook said. "It sounds like a bad thing, but as a solo artist, it can be easy to get a little too wrapped up in the details, making growth a little more difficult. By inviting more collaborators in, you wind up with results you didn't even know you were capable of."

As for Teddy's own album, he is still working through the events in his life and trying to express them the best way he knows how to — through songwriting.

"I'm super lost," he said. "I have no idea what the future holds and I have even more questions about who I am as a person in this time of my life and really focusing on that and I have to figure that out before I can figure out what I'm going to do about it. This next album is just a collection of songs of me figuring all this out and to be able to put it out helps me to move past certain things."

Every song Teddy produces is extremely personal to him. He records  and mixes all the guitar, bass, and percussion parts on his own.

"I'm proud of what he has done musically and I'm just amazed at his music ability and his potential," Glenn Rankin said. "In any realm he chooses, wherever and whatever he decides to do, I hope he finds happiness."

"If you don't hear Teddy play, you're missing out," Glenn said. "The music he makes speaks for itself."

So who IS Teddy Rankin?

Despite feeling lost, Teddy continues to channel his feelings through his music.

"This is where it gets complicated and hard to articulate because I still don't know the answers," Teddy said. "I feel lost and like I don't know what my purpose is, but I know I feel better when I make music. I think about how I am a cancer survivor and I've been given this extra time. I want to make every second count. I hope I'm doing that."

His new album, Who the Heck is Teddy Rankin? retells what Teddy has been through with songs like "Bad Therapist" providing insight into the world that has shaped him.

Music serves as a gateway to a world that is more manageable. Even as he talks about it, Teddy's shoulders relax, and his hands loosen as if to let the world be at peace with him again.

Even if for just a little while, music can transform his mood entirely and transport him to a place where time stops. It is a place that gives him confidence and allows him to perform. A place where the engulfing nature of anxiety and depression no longer has a hold on him and the frail light that used to taunt him shines through, allowing him to truly be himself — the real Teddy Rankin.

Teddy Rankin's new album was released on Nov. 29 and can be heard at teddyrankin.bandcamp.com. Chloe Forbes can be reached at cforbes@eriereader.com