Who Wants a Piece of the Action?: Action Point 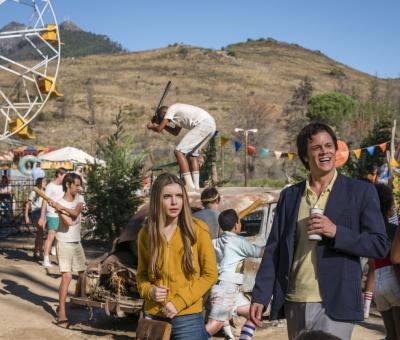 The modern world seems to be obsessed with safety. This isn't necessarily a bad thing, but in this land of helicopter parenting and extra padding everywhere, sometimes I'd like to see a return to the days when we'd walk away from a summer outing with a few harmless cuts and bruises. Johnny Knoxville obviously feels the same way, and his new film Action Point — while a love letter to those halcyon days — is in the end result, sadly bland.

Unbelievably based on the true story of "Action Park," the world's most dangerous amusement park, the film stars Knoxville as the owner of the rough-and-tumble venue who suddenly must compete with a new amusement park focusing on "safety," "responsibility" and all that other boring stuff. In order to compete, our hero cuts back on the rules and increases the insanity of his attractions, quickly turning his park into the most popular destination in the city and earning the ire of city officials.

The film is clearly trying to hearken back to the anarchic, "snobs vs. slobs" style comedies that were so popular in the 1980s and I welcome the attempt as my love for Caddyshack-style craziness knows no bounds, Unfortunately, the film is bizarrely paced with flat, uninteresting characters and most surprisingly, never fully commits to the wild, zany stunts it promised in the trailer. It definitely never reaches the bizarre heights of the real Action Park. The end result is a film that feels only half-complete, leaving the audience hungry for all of this "action" that was promised but never delivered. — Forest Taylor

On the Rocks: Downhill is an Unnecessary Remake

by Forest Taylor2/26/2020, 10:45 AM
A perfectly serviceable but wholly unnecessary American re-telling of an already charming Danish film

Toothless: The Call of the Wild is too Tame for its Own Good

Free as a Bird: Birds of Prey is Only Slightly Better Than its Predecessor