Why I am Running For Mayor

'Considering the City's' Lisa Austin on her new campaign 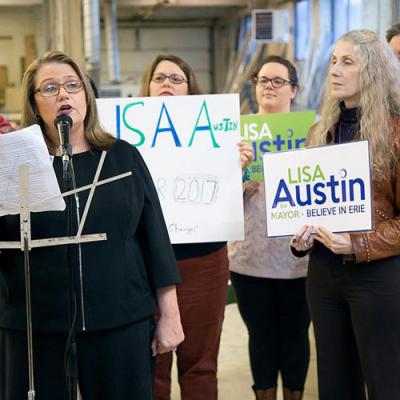 For 20 years, I've walked and biked around the city and talked with residents. The same issues always surface: jobs, schools, taxes, blight, and violence.

Though I wasn't born in Pennsylvania, I've worked for years with volunteers to improve Erie. I ask questions, research, collaboratively envision solutions, and – when I hit a stumbling block – try another way.

Because this city needs an elected leader willing to challenge the entrenched status quo and get the job done, I'm running for mayor.

Since 90 percent of new jobs are created by small businesses, I co-founded a competition back in 2008 that has helped a dozen residents manufacture new products. Our 2011 InnovationErie winner, Karen Rzepecki, is now the CEO of ReCAP Mason Jars, a thriving business with 10 full-time employees.

In the face of thousands of jobs lost at GE, 10 new ones may seem insignificant. But Erie's future lies in cultivating manufacturing, "eds and meds," tourism, arts and culture, and high-tech positions.

Economic development will continue to be a top priority of mine.

As mayor, I will support the United Way's Community Schools initiative and other programs that provide stability for our students and their families. I will address the funding crisis that drove Superintendent Jay Badams to propose closing all four high schools. Collaborating with other leaders, I will work to revoke the 25-year-old "hold harmless" clause that institutionalized inequity. We must reconsider the practice of using local real estate taxes to fund education (resulting in well-supported suburban and poorly-supported city schools.) This isn't fair to our kids.

Expanding vocational apprenticeships will help high school students who are not planning to go to college. In 2015, Penn State Behrend's Greg Dillon and I developed the Made in Erie Product Design Lab as a precursor to Erie County Library's Idea Lab, because we recognized that affordable design education is needed to spur economic development.

My own K-12 education (at a dozen public and parochial schools from Texas to Alaska) led me to Prince George's Community College in Maryland, then to Virginia Commonwealth University, and to graduate school at Yale University. I've taught seven years at a public high school and 23 years at three universities, where I learned the art of motivating people and navigating bureaucracies.

A community college changed my life. As mayor I will try to provide the same opportunity for Erie residents.

Youth engagement, through summer jobs, Mothers Against Teen Violence, and the Police Athletic League help address violence and addiction. As mayor, I will support community policing, a citizens' advisory board and other effective programs. I will work to increase support for community centers, Wi-Fi access, public spaces, and transit to create opportunity and hope.

We must repopulate the city. Employer-assisted mortgages could encourage Hamot, Erie Insurance, and Gannon employees to buy a home downtown. Last year, Baltimore announced a tax-credit incentive to attract municipal employees, especially the police, to live in the city they serve. Why not here?

My years of experience on my neighborhood association, service on the Zoning Hearing Board and Downtown Improvement District, participation on the steering committee of Our West Bayfront, and roles co-founding Preservation Erie and ErieCPR will help me, as mayor, to collaborate with community and civic stakeholders.

According to Kellogg School of Management, a diversity of people working on a problem creates a tension that actually fosters "a more careful" processing of information and better solutions. Thus, Erie would benefit from diverse decision-making groups. As mayor I will promote posting of board vacancies and encourage self-nominations, replacing the current opaque nomination and appointment process.

Because Erie doesn't have a city planner, well-meaning engineers are permitted to make bad urban design decisions. Untrained in how cities work, they overlook place-making opportunities that would transform Erie into a more connected and thriving community. As mayor, I will build on Charles Buki's Erie Refocused plan, work with design professionals, and give residents a real voice in their city.

As mayor, I will meet with northwestern Pennsylvania leaders to collaboratively plan for our region.

As mayor, I will meet with northwestern Pennsylvania leaders to collaboratively plan for our region. I will work with local universities to find ways to retain alumni. I will reach out to Pittsburgh, Buffalo, and Cleveland and bring a larger percentage of their million-plus residents to visit downtown Erie. I will find a way to engage those who love Erie – but live elsewhere – to be part of this city's rebirth. I will expand existing projects, exchange programs, and residencies with our four sister cities in Mexico, Ireland, Poland, and China.

Do you believe in Erie?

For more information, please visit austinforerie.com; check out the Committee to Elect Lisa Austin's campaign Facebook page; or send an email to campaign@austinforerie.com or call 580.8760. As the co-founder of Civitas Erie, Austin initiated the creation of organizations working for improved transit (All Aboard Erie), economic development (Innovation Erie), urban planning (Preservation Erie), entrepreneurial support (Made in Erie Marketplace), industrial design education (Made in Erie Product Design Lab), and community engagement (ErieCPR). Austin also served for eight years on the city's Zoning Hearing Board.