Why the First Amendment Doesn't Apply in "Duck Dynasty" Case

"Freedom of Speech is not a license to be stupid." 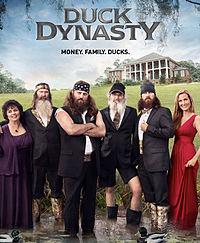 Unlike others who work at the Reader and claim hipster cred for not owning a TV, I can't. I own one. And I watch it. Not a lot – mostly for sports – but I do watch it. And I pay for cable. And I take no shame in admitting that.

So I won't claim ignorance. I can't. I know what Duck Dynasty is – kind of. And I know what's going on regarding the indefinite suspension of one of the show's stars – kind of.

Because of the media blitz coming from other glowing rectangles covering A&E's decision to place the guy (I don't know their names, so I'll call him Bearded Guy No. 1) on a hiatus, I know that some people are crying foul on the station, claiming that Bearded Guy No. 1's First Amendment rights were violated because he said in an interview that homosexuals are sinners.

I'm not going to get into the argument about why homosexuality isn't a sin, and I'm not even going to lament about how we'll look back at the persecution of the gay community now the same way we now look back on how we treated blacks in the '60s and beyond. Instead, I'm more concerned about why we even care about this, why it's filling my Facebook feeds, and why it's clogging up my Twitter timeline.

But I know the answer already. And you likely do, too.

We often look for examples of divisive issues because they help affirm what we already think. In short, we don't have to do any real metal work (A&E sucks! I can't believe they fired him for speaking his mind! Gays are sinners!, will come from one side, while Good for A&E for standing on principles! This was stupid! And you're stupid for thinking the way you do! will come from the other).

We know our parts, and we play them. Some will rally against Bearded Guy No.1 as being closed-minded and a fool. Others will elevate him to celebrity status, making him a spokesman for how they feel and think.

But here's the thing: He already was a celebrity.

Yes, I own a TV, and I watch it because I want to be entertained, but I know that I'm being entertained. Again, I take no shame in that. It's one of the ways I unplug for a moment and allow my jets to cool. I know that I'm watching people being paid to entertain me, and I know that I'm paying for it to be provided to me. That's what keeps this cycle going.

And yes, I follow trends enough to know that Duck Dynasty is a non-fiction TV show that follows some bearded guys around in a swamp as they – I'm assuming here – hunt ducks. I haven't ever watched the show, so if I'm off-base here, I'm sorry (sorry because I didn't want to waste my time researching more about a show that I really don't care about and may be slightly inaccurate – not sorry that I haven't seen it and don't want to, since, well, that's a choice, like owning a TV, I have). I don't know their names, and I don't know why the show has earned some of the highest records in the TV biz.

But I do know that this guy's is a celebrity, and that this show is celebrated, and that a company is paying this guy and his ilk to entertain. It's simple: He provides a service for which he is compensated. After all, you don't earn a promotional deal with Under Armour for nothing.

Sure, before A&E thought they could profit from duck-based programming and swooped in, this guy likely had a job (presumably hunting ducks?) and made enough money to survive. Somewhere along the line, someone found him and his bearded buddies/family/strangers/actors-for-hire entertaining enough to hire him for pay. Why? Because they were betting that it'd sell commercials and make everyone a lot of money. And it did. And it probably still is. And that's savvy business.

And, I bet – because I like to think the folks at A&E aren't idiots – they whipped out a contract and Bearded Guys 1 through ?? signed on the dotted line.

Companies are smart like this. They know they need to – above all – protect themselves from those who represented them. This is where I think the First Amendment argument is getting lost in the mix.

Every job I've had – save for slinging hay bales on a farm under the scorching sun for five bucks an hour – I've signed a contract. Why? Because wherever I go, whatever I say, whatever I do in public, I'm representing that company, and that contract explains that to me. It tells me what's expected of me, and tells me what I can expect from the company.

Right now I have two jobs, one here at the Reader and another at a local university. And at both places I'm asked to uphold the institution's mission – something I agreed to when I accepted compensation in exchange for my services. And at both, I'm afforded great freedom, which comes with trust. Are my superiors at the Reader standing over my shoulders as I write this? No. They don't even know I'm writing it and have plans to publish it. Do my superiors in the English department stand over my shoulders when I'm grading a student assignment? No. They trust my judgment and stand by them.

Lose that trust? Break that contract? Well, then it's time for me to start seeking employment elsewhere in hopes of representing another company.

But back to that First Amendment thing. It should go without saying that anyone working in the media cherishes the First Amendment and the rights it affords us all. But those rights only go so far. Editor-in-chief Adam Welsh has a mug sitting on his desk that reads: Freedom of speech is not a license to be stupid. And, man, if that ain't a truth.

Was what Bearded Guy No. 1 said stupid? Well, he does have every right to say it. But it is stupid for anyone to think that the First Amendment should protect him from being fired, since he's an employee of a company who happens not to agree with his sentiment and they judged that to be a liability.

Let's take one brief moment to remember that ever since 1791, the First Amendment has protected our freedoms of speech and press, the exercising of religion, the right to assemble peacefully, and the right to petition a government. Nowhere does it ensure us job security, no matter what we do.

And if people are up in arms about this, this is what concerns me the most: We seem to live in a world devoid of consequential thought and action.

Yes, we can say – thanks to that First Amendment – whatever we think, regardless of how misguided, uninformed, idiotic, or offensive it may be. But that doesn't mean we should act surprised when we don't like the consequences of our actions, because, well, all of our actions have consequences.

Normally that answer stuns them. So I elaborate, which goes a little something like this:

No one – I hope – is forcing you against your will to be here. You elected to apply to this university, and deciding members of the community elected to welcome you here. You then agreed to exchange your pay for their resources, which ultimately can lead to a diploma. But nothing's guaranteed.

Do you have to come to class? No. Do we have to have class? No. We can both decide not to. But, keep in mind there are consequences to our decisions and actions. If you decide not to show up, you won't have access to the materials germane to this course and the learning objectives you need to achieve in order to receive good credits and credit for completing such a course. If I decide not to show up, my employer will certainly notice and will find someone else who does want to show up to take my place.

So no, we don't have to have class. But if we don't, that means no education for you and no paycheck for me. As for me, I enjoy teaching and enjoy receiving a paycheck, so you can expect to find me here. Whether you join me – and the rest of your classmates – is entirely up to you.

So did Bearded Guy No. 1 have the right to say what he did? Absolutely. But A&E also had the right to suspend him based on his actions, and regardless of the topic matter and the actual thing that was said, no one has the right to fault them for that.

Perhaps some of those rushing to Bearded Guy No.1's defense, attempting to use the First Amendment as a means to explain how A&E's actions were unjust, elected not to attend a few classes where the constitution was taught, examined, and discussed. And all of this is nonsense that resulted in the fifteen-hundred-word rant here is making a damn strong argument that perhaps I need to think more about claiming some hipster cred in the near future and trashing the boob tube.