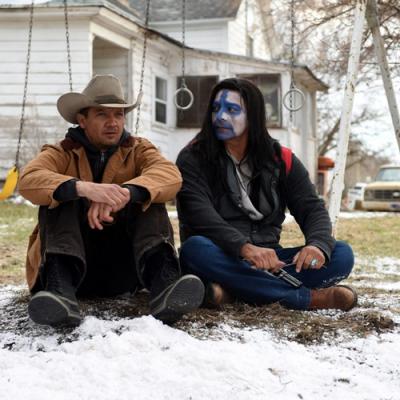 Taylor Sheridan is obsessed with characters at the end of their rope. The bleak scenery and broken people of Sicario and Hell or High Water (both written by Sheridan) are testament to that, but his directorial debut Wind River gives us possibly his most desperate story yet.

The film follows a veteran game tracker (Jeremy Renner) and an out-of-her-element FBI agent (Elizabeth Olsen) as they team up with tribal police in their search for a teenage girl's killer somewhere on a Wyoming Indian reservation. The story couldn't be simpler, but it works, thanks mainly to the actors. Renner is a particular standout as the hard-bitten survivalist and Olsen does a fine job in her fish-out-of-water role. Also, veteran character actor Graham Greene is great in his supporting role as a world-weary police chief.

Sheridan makes great use of the snow-covered Wyoming (filmed in Utah) wilderness, giving us locations that are just as grim and miserable as the mystery our heroes are slowly uncovering. That being said, this is clearly a directorial debut as Sheridan doesn't really attempt anything unique or interesting with the filmmaking. It's surprisingly flat and lifeless and at times it feels less like a theatrical release and more like a pilot for CSI: Wyoming.

All in all, Wind River is a tense and intriguing procedural film (until the end when in goes a little off the rails into action/revenge territory). There's nothing special about it, but if that's your thing you can find a lot to like. — Forest Taylor