Veterans Day is over, but that isn't stopping the Winter Warriors tour from showing their appreciation for those who served. 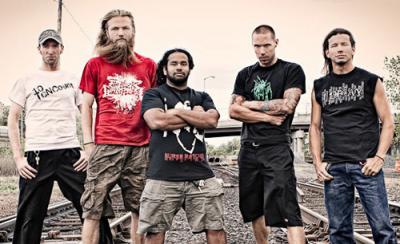 Veterans Day is over, but that isn't stopping the Winter Warriors tour from showing their appreciation for those who served.

Detroit's thrash/heavy metal group Battlecross is collaborating with the Veteran Ticket Foundation, an organization that provides free admission to concerts and other events to members of the military, on their headlining tour across the U.S. after doing major tours in South America and Europe.

"We are a band that stands for ideals such as loyalty, honor, sacrifice, and perseverance through our lyrics and how we conduct ourselves," says guitarist Hiran Deraniyagala. "[We] hope the tour will be a fitting tribute to every service member who attends. We look forward to raging with our fans who serve or have served in the U.S. Armed Forces and thank them again for their service."

Battlecross' latest album War of Will released on MetalBlade Records debuted at No. 134 on the Billboard Top 200 chart, and peaked at No. 3 on the iTunes Metal charts.

Supporting acts on the tour are Wretched from Charlotte, N.C., and Erie's own Christian metalcore band, War of Ages.  War of Ages is one of Erie's most successful underground bands, and one of the only bands still active from what some would consider the glory days of Erie's underground music scene.  Despite the members having relocated to other cites, WoA returns to their hometown on almost every tour, and have filmed music videos for their songs "All Consuming Fire" and "Chaos Theory" at Forward Hall and the old Basement Transmissions, respectively.

Opening the show are locals Saevitia and Precinct Aflame, both of which have presale tickets available for the event.

It's reassuring to see that in a business usually motivated by profit, one band is willing to sacrifice some of that to give back to those who have sacrificed much more, and hopefully it will encourage other bands to do the same.