The trend of yoga with goats comes to Erie

by Charles Brown
View ProfileFacebookTwitterInstagramRSS Feed
October 23, 2019 at 11:00 AM 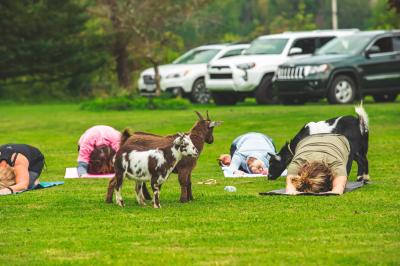 Yoga has always been one of the most effective means to soothe the mind, body, and soul. For centuries, it has been a universal way of practicing peace and harmony to center the human brain and calm the spirit. Many instructors around the world utilize different methods by adding ancient mantras and easy listening music to transcend the art form.

But with Amelia Madara (part-owner of Madara Farms with husband Andrew Madara), the decision to spice things up a bit turned their green pastures into a yoga mat for both human and furry friends. "Yoga with the Goats!" is a fun way to bring forth positive vibes with the innocent interaction with goats seeking love and attention.

Inspired by Breanna Miller, a dear friend of Amelia's, the wellness event has been drawing people from the area to experience a new way to get in tune with self. Madara Farms was purchased by Amelia and Andrew in 2017 to harvest organic foods, care for animals, and sustain a meaningful living. "We purchased the property to have animals and live a more simplified lifestyle," Amelia confirmed.

Fast forward two years later, and Erie's idea of goat yoga was born at a candle-making class at Candle Box Company where owner Leah Show and Show's mother also pushed Mrs. Madara to seek out yoga specialists. Instructor Amy VanScoter, who also has a weekly class on Thursdays at School House Yoga Studio, was contacted to lead the four-legged sessions.

"At first I thought goat yoga was kind of a joke; very trendy." VanScoter admitted. "I tend to be more traditional and spiritual with yoga. But, I love animals and was very excited to meet the goats."

With positive reviews and a multitude of photos online of the Saturday morning classes, "Yoga with the Goats!" has been catching on, and the goats are enjoying themselves as well, invading one mat a time for smiles and laughs. — Charles Brown