Michael Bennett offers up three people in one band that you ought to know. 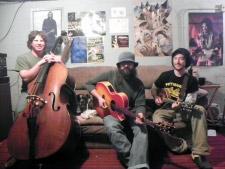 The Ballad of Scarlet Ledbetter

Life is run by a series of coincidences. These simple, imperceptible shifts in the minutia of everyday living hold surprises and form unknown connections sometimes leading to brilliant confections for all to devour.

It was through a string of such events the band Scarlet Ledbetter came into being, providing musical morsels for the city to delight in.

Tanner Edwards decided he wanted an upright bass. Dominick DeCecco met Keith Wilson at an open mic. DeCecco and Edwards were housemates. And just like that there was a band.

"I first met Dom at the open mic at Night Flights, of all places, just before it shut down," the bearded and bespectacled Wilson said. "We played a couple of songs there, like a jam with a bunch of people and [later] he said, 'My friend Tanner is getting an upright bass soon, let's make a band.'"

Edwards got his bass at the end of December and the band has been picking up momentum and fans since.

For basically being four months old, this band came with instant credibility on the Erie music scene. Edwards and DeCecco are seasoned veterans; they have paid their dues and been successful, artistically and monetarily. Edwards plays in Paper St. and has also been in Frog Tree Gorge Band and played with Hello Kitty Death Squad. DeCecco is the principal songwriter and singer of Shotgun Jubilee. He is starting a new songwriter's showcase to be held Monday nights at the Vermont Tavern and co-hosts the always popular Sunday night open mic at The crooked i with Matty B (Matt Boland of Dirty Pickles fame).

Wilson had been living in Charlottesville, Va. and had just started venturing out to play since moving back to Erie when he met DeCecco and Boland.

"I have to give Matty B some credit," Wilson said. "I met him at the Night Flights thing and he kinda put the bug in Marty [Schwab of The crooked i]'s ear that he should listen to [me]. And I was able to play in the John Lennon Tribute show."

The importance of the open mic scene in Erie cannot be overstated. Scarlet Ledbetter happened because of an open mic night and continues to play them frequently to help facilitate the band's unity on stage.

"I feel like it comes a lot from the fact that there is a community of bands and musicians that are all cool with each other and not competitive and shitty with each other, wanting to be supportive of each other," DeCecco said.

"I think that's what's cool about Erie," Wilson added. "Everybody is really cool, wants to jam with each other, and help each other out. I used to live in Charlottesville, and it wasn't like that. It was very competitive, and there we're a lot of bands in a small area. It's more of a community here."

Musically they are a laid back, yet intense, folk trio. Wilson's voice plays perfectly over DeCecco's mandolin while Edwards' bass provides eloquent bottom. Since DeCecco and Edwards are in other bands it is Wilson who provides the songwriting in Scarlet Ledbetter.

"He has the songs," Edwards stated matter-of-factly. "I think it started out like 'well this is Keith's band,' but I think it's turning out to be more a group thing."

Scarlet Ledbetter is an ego-free exchange of musical ideals.  No competition or strife. They haven't been around long enough to incite band drama.

"Our dynamic when we practicing stuff together… I feel like, especially early on, we would try to defer to Keith like, 'what are we doing, Boss?' but he's not having that," DeCecco said. "He's like, 'I don't know, what are we doing?'"

Scarlet Ledbetter is three men playing music. They are friends. There is an ease to their existence when they are together. One would think they spend half of their rehearsal time designing the Scarlet Ledbetter tattoos they would all get to show how tight they are as a band.

The dynamic of the band may be the best feature and the key to any longevity. One can see it in the camaraderie they all share. Especially the pairing of DeCecco and Wilson. Both of them have the type of talent that necessitates being a front man, a position neither seems entirely comfortable with at all times. Yet combining their talents in a non-hostile environment allows them to grow together as artists.

Edwards is the perfect piece to enable their maturation as artists. His almost I'm-just-happy-to-be-here vibe is a ruse in the actual mechanics of the band. He offers solid encouragement not just with bass lines but also as a spark. Wilson and DeCecco are singer-songwriters, sometimes maudlin and introverted. But as the band plays and looks to each other for changes and solos, the infectious smile on Edwards face spreads quickly and they remember they are having fun. Edwards is the band's constant reminder that while their art may be heavy, it is not too big a burden for the band to carry.

"Are we a band?" Edwards said, again lightening the load. "Are we a full-blown band? Are we an outfit? It definitely has potential, this whatever."

The "whatever" is working. The band has a bi-monthly gig at The Lakeside Tavern in Waterford and has opened for nationally touring acts at The crooked i.

"I feel like we are still kind of forming a bit, even as we get to play a lot," DeCecco. "I feel like we could book ourselves as busy as we want to be. "

And the band plays, a lot. They have recently entertained crowds at Arts N Drafts Festival and The Riverside Music Festival while playing their regular gigs and open mic nights.

As much as Scarlet Ledbetter plays, there isn't jealousy from the main projects of the members.

"The other members of Paper St. have come to shows," Edwards said. "Paper St. fans have come to shows. And they all love it. They have been nothing but supportive. Every time we play out we use Paper St.'s PA. We've even used the van a couple times."

Then again, the band is still adjusting to the juggling act of the demands of three bands.

"We haven't really gotten to that point yet where we have to find the balance; I guess we will at some point," said the always down to Earth DeCecco.

On stage the band is loose but focused. Wilson holds hard to his guitar as he belts out his personal, yet powerful lyrics. Edwards is eternally exploring his new instrument, finding new flair with every performance. DeCecco seems most comfortable to step back and pick away at mandolin or banjo. The musical combination lends itself to the folk/roots movement taking Erie by storm.

"I think it's a trend in general," DeCecco said of their sound. "I think roots music and roots-based music is still unique around here. It's going to turn someone's head to hear Matt Texter play the way he does, or to see a banjo or and upright bass. It's going to catch people's attention; it still has a unique factor. More people seem to be enjoying it or playing it."

"I usually play a six-string electric bass and just the difference in how people are like 'whoa' when you're playing an upright," Edwards said. "I don't want to talk too much about how awesome it is 'cause Ralph [Reitinger] will go get one and then I'll be done. "

Musical talent and eccentricities aside, the band does have its fun. Along side the deep melancholia of Wilson's songs, the band chooses choice covers to play. Recent gigs have featured Haddaway's "What is Love (Baby Don't Hurt Me)," Michael Jackson's "Billie Jean," and an absolutely fantastic version of Peter Gabriel's "Sledgehammer."

"It's fun to take songs that you might not normally hear with that sort of set-up and do kind of our version of it," Wilson said. "I feel like the songs I write are all serious. Tragic maybe."

"Cry yourself to sleep with Scarlet Ledbetter," DeCecco chimed in jokingly. "[Keith's songs] are more serious, and then we add in funny songs, I don't know how it comes across to an audience but I think it's a good balance."

The covers the band performs add flavor and balance. Playing Wilson's originals is the band's main focus and his songs have earned his band mates' respect.

"The lyrics that Keith has are sweet because they grab people," Edwards said. "You can tell people really like his lyrics. I'm one of them."

There is mutual admiration flowing throughout this band, a fact that is evident every time they play together on stage or off.

"I just have a lot of fun," Wilson said. "I've played with some other groups and I felt like I was either playing with somebody who was really talented but not very fun to be around or somebody really cool just not that talented. But with these guys it's the best of both worlds. We can all totally hang out. These guys are really talented. I think we have a lot of fun playing and people see that."

Scarlet Ledbetter isn't just a side project. In the short amount of time the band has been together they have fashioned a sound and solidified their talent into a must see act on the Erie scene.

"The future just depends on how far we even want to spread ourselves out," Edwards said. "This is a really fun band right now, I don't think any of us want to do anything to make it so it's like '[Expletive deleted]! I have to go and play with these guys tonight.'"

One can only hope that day is very far off. The pure delight the trio shares when playing with each other translates immediately from the stage. Each individual personality enhances the others and fuels music made to be enjoyed.

The band takes their music seriously; everything else is up for grabs.

"Scarlet Ledbetter is taking over the world!" Edwards joked.

To which Wilson instantly retorted, "We will be kind to the people."

Even as overlords they will have our best interests at heart, how could you not want to partake in Scarlet Ledbetter with that knowledge?