Seth Brewster, guitar strapped to his body, violin at the ready, feet constantly working pedals, is creating a musical landscape with each song he sings. 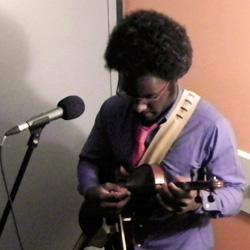 The music begins with a simple chord progression strummed out on guitar. The strings of a violin are carefully plucked. More notes are added from the guitar. A bow is pulled over the violin strings. A soulful vocal follows.

All of the sound flows from one man.

Seth Brewster, guitar strapped to his body, violin at the ready, feet constantly working pedals, is creating a musical landscape with each song he sings.

The 27-year-old is all about the sound.

"I consider myself devoted to sound," he admits. "If I have the opportunity to be on the receiving end of music I'm constantly thinking about the sound. Whether it's the vocalist, the drums, the guitar… I think that I'm just so involved with sound. One day I may lose it and end up moving into some place where I can just be enveloped in natural sounds. I love sounds."

Brewster's music is about building, maintaining and achieving the perfect sound. He considers himself more of a magician than a musician. He is not pulling off tricks. He does not egotistically believe he is doing something no one else can. He is working to make magic through music.

If he is using slight-of-hand, the audience will never see it. The magic he makes appears effortless. The instrumentation and vocal blends he manipulates and weaves on stage leaves the crowd with a sense of awe and wonder, just like a magician should.

Brewster was born and raised in Meadville. The only child of a single mother, he spent a lot of time in the daycare system, which he confesses was good and bad.

"I've spent a lot of time alone so I feel like I have a creative mind because as default you have to entertain yourself," he said. "I really didn't get into music until the third grade, I picked up the clarinet and stuck with that through high school."

Brewster credits his mother, Darlene, with the formation of his magical, musical mind.

"My mom actually studied at Edinboro, and she's big into art and that's one thing I wish she would have continued. But then she had me so I kind of feel guilty about it," he admitted. "She's a fantastic singer most of her sisters sing well, I don't know my father so I don't know if he can sing or not.

"She's intense. Definitely the reason I have any kind of creative landscape, because everything, right down to the way she decorated the apartments we've lived in. She's very, she's just a gem. She's a dynamo. She works hard. There are no superlatives for mom. Darlene is just the sh… stuff. She's awesome."

Brewster is far from being a momma's boy. He gives his mother full respect and appreciation for all she has done for him. The influence she has had on his creativity and musical styling cannot be understated.

"As a black man, there was a lot of Michael Jackson in the house. Anything you can imagine a woman in the 70s and 80s listening to… she had all the cassettes," he said, describing his childhood musical education. "She had Paul Simon's "Graceland."

When I put that on I heard African influences, heard jazz, heard folk… Paul has been in me probably since I was in utero and I've still got this great appreciation for him."

Brewster got into skateboarding in junior high and heavy into punk music. His next musical breakthrough came in high school. He became interested in playing guitar because of his friend Chase Carlson.

"He was that guy in the Nirvana T's and all the girls really dug," he remembered. "Anybody who plays the guitar would be lying to you if they told you there wasn't a catalyst, some bit of insecurity that lead them to play guitar. I was at a campfire and he was playing… I was in love with him.

"Chase passed on. He got into some heroin and he's since passed on but I always credit him for getting me into that part of music," he said.

In 2003, Brewster moved to New York City where a roommate bought him his first acoustic guitar.

"I put on A Damien Rice Record and just never dropped the guitar since the," he said.
Last summer he added violin and looping to his repertoire, homage to the musical influence of Andrew Bird.

Brewster plays with bands, Root 5th, Ground From Sky and other duos and groups, but has really been exploring his solo music. His music is string-based loops and vocals delivering a personal sound with unique flourish. Although his style is original it is not beyond compare. If Andrew Bird and TV On The Radio had a child, Brewster would probably take his lunch money and write a kick ass song about, and they would thank him.

He is still working on his solo stage persona. His presence is well kept by his constant working of instruments and loops, which doesn't leave a lot of space to be cutesy or have to develop a shtick.

"I can hide behind the pedals. The nerves I've had just playing acoustic guitar. I still get nerved out. If you are on a stage it's actually a little better because typically there is a divide between the stage and the people at a venue," he said.

"I'm used to hiding behind the band as well. You're always wondering, 'does this person like this?'

"Meta-cognitively thinking about how you're thinking and it just turns into this loop station in your own mind and you start… it's bad. If you could project my thoughts it would be crazy," he said laughing.

Beyond the loops, Brewster is beginning to get back to basics, a chance to try his magic without as many puffs of smoke.

"I've been trying to put the pedals away and get back to acoustic, because that's where it all began and some of the best songs have been written with three chords or less. The technology is great but when it goes it goes and I don't want to be naked on stage," he said.

Brewster is at work on his first album, a five song EP, which he hopes to complete this summer. But it is the live Seth Brewster show that holds the most magic. Every time he plays another show he develops more strength on stage, less reliance on thought and more on the action. It is an escape. Musically and personally.

"I hate to consider myself in general," he said, considering himself. "I think I think too much. And I think I think about things that are related to music and what I'm doing. I don't sleep well at night due to unrelated thoughts.

"The ubiquity of random thoughts has always been there. To say I'm introverted would almost mean this calculated, cognitive approach to the way I think, but I'm far from that, man. I really have issues I think," he said laughing.

Having completed his time at Edinboro, Brewster has moved to Pittsburgh to see what musical meanderings the city holds. But he promised to return often to Meadville and Erie to play. His magic should not be missed.