You Ought to Know: Chuck Scalise

Everybody knows Chuck. If you don't, here's your chance. 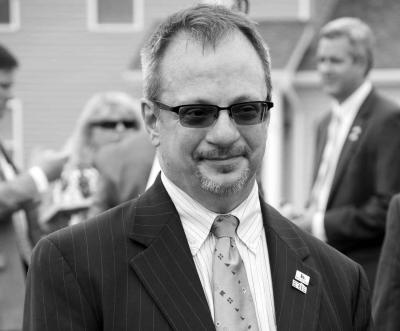 Always impeccably dressed and often donning his signature bowtie, this local denizen is, in his own right, a community asset. From his dedication to the organization in which he serves, to the friendships and connections he's helped others establish over the years, to the vast amount of community service he dedicates much of his livelihood to – Chuck Scalise has been and will continue to be an integral part of the Erie Community.

A gentleman who has been an endearing part of my life for many years as both a colleague and a friend, Chuck is one of those rare individuals that knows the delicate balance of being creative, forthcoming, and business savvy throughout his work. I sat down with the once music major-turned successful businessman that serves at the forefront of an organization with a multi-million dollar budget at the Erie Club last week, on what was a snowy evening in April – yes, you read that right – to talk a little about his life and his work.

Although he's rather well known and admired in the community, he's quite humble when it comes to talking about himself. And each time I tried to change the direction of the conversation, it always turned away from him and back to the organization that he loves and creates his entire livelihood around: the Housing and Neighborhood Development Service, better known as HANDS.

"I always like to talk a little about the history of HANDS," he tells me, as he settles into the leather sofa in the pub room. "The organization was founded in 1965 to help low-income families purchase homes."

In its inception, HANDS was an organization dedicated to helping the community with housing needs. The group was initially comprised of religiously motivated volunteers, including his parents, who determined that not everybody could be a homeowner because of some impediments. "It started at what was St. Andrews at the time, but folks from St. Peters, St. Georges, First Methodist, First Presbyterian, and several other churches wanted to get involved," Chuck explains.

Today, HANDS is a private not-for-profit organization that is committed to making stronger and more vibrant neighborhoods in partnership with the communities it serves through the development and management of quality affordable housing.

In the beginning, volunteers would start counseling families to help give them the confidence, skills, and tools they needed to become a homeowner. However, after some time working with these individuals, the folks behind HANDS began to realize that some just didn't want to become or couldn't become homeowners.

"Moreover though, even if they couldn't purchase a home, we realized we still needed to improve their housing," Chuck adds.

The organization then did some grant writing and fundraising and started purchasing debilitated housing, rehabilitating those properties and offered them for rent. "That's how they got in the rental business," he continues. "My parents were one of the couples that were involved in the group. My mother was a good writer so she did a lot of the grant writing and got some funding and hired an executive director to carry it out."

Although he didn't originally plan to be part of the endeavor, Chuck would eventually get involved in the business. Initially, he had hopes of being in music education.

"I remember my dad telling me that one day he wanted me to take over for him in the business. But that was the farthest thing from my mind. When I was young, all of us kids took piano lessons at the insistence of my mother. But I wasn't the best student," he adds, laughing. "So when I was in eighth grade, I decided that I really wanted to learn a band or orchestra instrument."

Markham's Music store, which used to be located in downtown Erie, sent fliers to the schools offering an introductory program in which you could rent an instrument and take lessons for the summer. It was one of more than a dozen music stores that operated in Erie in the 1970s. Today, we only have a handful left in the city.

"So, I chose the flute." As for his reasons he picked up this instrument? "Well, it is relatively small and easy to carry." He adds comically, "And partly because I was probably a little lazy. I mean, I really didn't want to have to carry around a double bass." I laugh. I appreciate the sentiment given the fact that I play the piano and know the difficulty in even transporting a keyboard around. Though I learn he had quite a natural talent for it – he went on to play with the Jr. Philharmonic as first flute, and after he graduated from high school, he went to Edinboro University of Pennsylvania to major in music education.

It was halfway through college when Chuck realized he didn't have the same passion he once did and started to think that, perhaps, he was interested in the business.

"When I was on break from school, I would work at the office and fill in for people when they were on vacation or sick," he explains. "I started by doing clerical work and other duties along those lines, and I realized that I actually really enjoyed the business." At that point he would switch his major. "I ultimately received a degree in economics and business with a minor in music."

Even though he didn't finish with a degree in music, this combination of right brain, left brain would help Chuck ultimately apply more creativity into his professional world.

"The music and arts background allows me to have a higher degree of sensitivity towards the whole person. A lot of our residents have dabbled in the arts to some degree and when we do our building renovations, we try a little harder to accommodate a budding artist."

It also helps him better understand individuals with disabilities.

"Some of those we house may have a mental illness but also have a high IQ and a gift in art or music that's highly developed. Having this background helps me have an advantage in understanding the importance of the arts in the total development of the person."

His creative background also applies to the work he puts in when helping to design the buildings they develop for potential residents.

"When creating our new apartment homes or houses, we focus a lot on the curb appeal and the overall appearance. Little things like awnings aren't an expensive addition, but it helps improve the aesthetics. Many remark that aside from the quality, soundness, and efficiency we put in, we pay a little more attention to the details, and that's worked well for us – it really gives a wow factor. Plus, it's improving our city."

Chuck is also very proud of the city from which he comes and in which lives. "I tell people all the time where I'm from and that I'm an Erie-ite born and raised. In my work, I have to travel around different parts of the state, and I constantly try to promote it the best I can."

Aside from all he does in work, he's also actively involved in a variety of different charitable organizations. When I ask him to tell me about these organizations, he opens by telling me he's on the Erie Club entertainment committee. I laugh because this isn't exactly what I'm looking for and he knows this, but it's one of the qualities I love about him – his sarcasm. But he does offer a little more insight.

Chuck also serves on a state advocacy organization – the Housing Alliance of Pennsylvania, where he chaired a statewide housing meeting that over 900 people attended last year. In addition, he serves as president of a trade association that represents property owners and management companies that work with HUD and affordable housing, and he's worked with several other nonprofits including, most recently, Erie Day School where he joined the board of trustees to volunteer on the buildings and grounds committee.

But for Chuck, things always find a way back to his work.

"I really enjoy being part of a second generation that is part of this organization. Both my parents – Charlie and Kathy – never had the opportunity to go to college, but they were both very brilliant and were truly concerned with the welfare of others – so they took their talents and skills and applied them where they found a need."

When started, HANDS had an operating budget of under $100,000. Today, their combined budget is around $7 million. "The first year or two, we operated strictly with volunteers. Over the years, we've developed over 1,000 apartment homes and houses. I started as a property manager and was deputy director under my dad until I was appointed executive director in 1986."

In too many organizations today, many leaders' business acumen lacks a creative leadership component. This isn't the case with Chuck. He knows the strategic benefits in the left-brain, right-brain approach to business – which has not only helped the success of his own career, but the success of the organization overall.

Over the years, his passion for helping others has come to the forefront of those who know and love him. As of today, the group has developed four-dozen housing developments resulting in the production of more than 1,000 units of affordable housing in nine counties across Northwestern Pennsylvania.

As HANDS move forward, the group will continue to grow and expand its offerings and continue to take an innovative approach to identifying and addressing the needs of its community.

And the way I see it, the future of the organization is in great... hands.