Young Rock: This Ad Has Been Paid for by 'Dwayne Johnson for President' 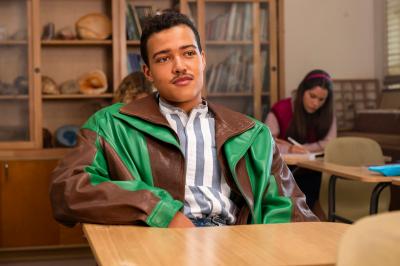 It's not just that the narrative structure of NBC's new show Young Rock plays like a threat. It also feels like Dwayne Johnson and NBC are using viewers as an oversized focus group, probing just how effective Johnson's origin story would be to a politically divided nation.

The show, which premiered on Feb. 16, begins on a futuristic campaign trail, Johnson parlaying his celebrity status into a presidential run. It feels like the worst possible time to take this particular angle — after all, we did just rid ourselves of another screen star turned inexperienced policymaker — but what's worse is that Johnson, and seemingly the show's other leaders, have anticipated the complaints about a potential (real world) run. He can't understand the common man because of his cushy, famous lifestyle; but you're wrong, and this journey into his past through a bevy of talented actors will prove it.

And it's a shame because once we depart the future, there's plenty to love. All three Rocks — Adrian Groulx (10 years old), Bradley Constant (15), and Uli Latukefu (18-20) — hold their own, exhibiting different shades of endearing charisma. It's not an entirely favorable depiction of his upbringing, either. His flawed father, wrestling legend "Soul Man" Rocky Johnson (Joseph Lee Anderson), is irresponsible at times, slumping at others. Meanwhile, his mother (Stacey Leilua) covers for the absent Rocky in one particularly "real" moment in the pilot, while she struggles to make ends meet almost constantly. Stolen glances between the parents hail from a better, more focused show.

For humor, the pilot capitalizes on Johnson's struggles in high school; for one, students thought he looked too old to *not be an undercover cop. Johnson's life hasn't been particularly private, so it's worn territory at this point, but Taj Cross as best friend Gabe gives that joke new life. In the second episode, Gabe's introduction of the "Karens" (and Bonnie) is another standout laugh.

Every time you get engrossed in the story of the traveled wrestling family, though, you get ripped back to the future and to goofy interplay between Johnson and the great Randall Park (strangely playing himself as a failed actor, while dropping other depressing tidbits about his future life).

You want to love Young Rock It's telling a different kind of family story, across generations, and it presents an extremely diverse cast. Ditch the misguided framing and you might have network TV's most promising new show of the spring. — Christopher Lantinen