You're Going to Meet Death Now:

Suspiria Brings the Arthouse to the Splatterhouse 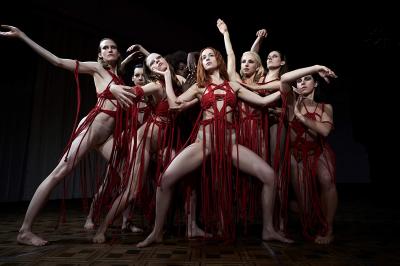 Dario Argento's 1977 thriller Suspiria is a curious film indeed. There's very little story so to speak of, so the film relies on pure atmosphere. With imagery that is simultaneously beautiful and nightmarish, it often feels less like a movie and more like a waking fever dream. Luca Guadagnino's (Call Me by Your Name) Suspiria on the other hand, is a frustrating, polarizing and ultimately brilliant work that is less a "remake" and more a different take on a similar subject.

Set in West Berlin in 1977, the film follows young Susie (Dakota Johnson), an ex-Amish girl who enrolls in a prestigious ballet academy. As the girls arduously train for a big dance performance, Susie and several others begin to discover that this academy may be a front for a secret coven of witches who plan to use the girls for their own nefarious purposes.

With its roaming camera and Cold War setting, the film sometimes feels less like an Argento film and closer to Andrzej Zulawski's 1981 art-horror opus Possession. Personally, I welcome the change of pace as a simple remake would have been a waste of time. Instead, this film uses its supernatural trappings as a way to make some truly interesting statements about anxiety and performance, the terror and dread that gripped a Cold War world (fears that haven't yet gone away) as well as a snapshot of a city still reeling from the scars of war. The film won't be for everyone (in fact, most people will probably hate it), but if a slow-burning arthouse horror film is your cup of tea, you can't go wrong with Suspiria. — Forest Taylor