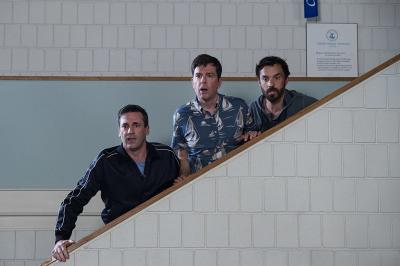 The term "bromance" is one of the worst terms to ever enter the vernacular of modern movies. Because of it, now every comedy about male friendships is presented in the same way: a group of morons in a perpetual state of arrested development smoke pot, cause embarrassing public scenes and have a healthy dose of gay panic on top of things. That being said, the film Tag intrigued me due to the fact that it was based on an actual group of friends. I thought maybe we could get a new perspective on male bonding … much to my dismay, we instead got pot smoking, public embarrassment and a healthy dose of gay panic.

Loosely inspired by a 2013 Wall Street Journal article about a group of friends who have consistently been playing the same game of tag one month out of the year … for 30 years, the film follows five buddies who all meet for the wedding of the only undefeated player of their game (Jeremy Renner) in an attempt to tag him for the first time. However, their friend is an almost supernaturally good tag player.

The true story seems far more fascinating than the film adaptation; so much so that I almost wish the film was a documentary. The film itself is too full of elaborate comedy set pieces involving middle-aged men acting like childish idiots where middle-aged men don't normally act like childish idiots. Some of it is genuinely funny, but as a whole it just becomes too much and by the time we get to the "heartwarming emotional moments," I just didn't want to be around the characters anymore. Maybe someday someone will think of something new and interesting to say about male friendships, but this is not that day. — Forest Taylor