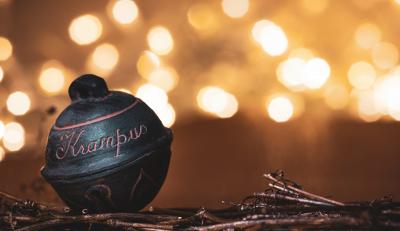 defpics
Traditionally observed in the Germanic countries surrounding the Alps, Krampusnacht (Krampus Night) is the punitive counterpoint to Nikolausabend (Nicholas Evening), wherein naughty children are greeted by the goat-like Krampus' birch branch lash instead of treats from St. Nicholas.

As we move into the holiday season, you'll be hearing a lot about good ole' St. Nick. But, there is another tradition rooted in German-speaking countries that began centuries ago. The legend of Krampus — a goat-like demon out of Alpine folklore said to punish badly behaved children by lashing them with birch rods — has gained so much attention in recent decades that around the world, many countries celebrate the night known as Krampusnacht (Dec. 5) and here in Erie, we'll have the first Krampusnacht Holiday Bizarre.

If you've never heard of Krampus, here's what you need to know. Krampus is a horned, hairy, anthropomorphic figure, originally from Alpine folklore. During the Christmas season he scares children who have misbehaved, sometimes assisting Saint Nicholas (the first of three good December figures; the other two being Santa Claus and Ded Moroz). The Feast of St. Nicholas is celebrated on December 6th. On the preceding evening of December 5th, Krampus Night or Krampusnacht, he appears on the streets. Some legends say the pair visit children on the night of December 5th, and Saint Nicholas rewards the well-behaved children with gifts such as oranges, dried fruit, walnuts, and chocolate, while the badly behaved ones receive coal and Ruten bundles (birch rods). The character started to become a part of American pop culture after he was portrayed in several horror films (2010-2017).

All things Krampus will be celebrated in Erie at Krampusnacht Erie's Holiday Bizarre at Basement Transmissions. Vendors from all around will showcase their creepy creations, oddities, and campy Krampus collectibles. Erie's own Kerrie Fargiorgio is organizing the event. Kerrie and her husband Eric spend much of the year vending at various events similar to this one in other cities. "We have some local vendors and some we've met in our travels. All were selected based on a very specific theme of our show. Mothboys podcast will be there and they will cover our event on an upcoming show. We are charging a buck just to offset some of the costs going into holding an event of this size," said Fargiorgio.

Fargiorgio says that Krampus has been a part of her family's holidays since she was a kid, living in Canada. "Having older brothers you learn about that stuff pretty early," she said. "Krampus is a big part of the holidays for us and we hoped Erie would feel the same about him. We have our very own Krampus to take a holiday photo with. Leadhead Screen Printing will be live printing the official event shirt. We will be having a best-dressed Krampus contest; yes, dressing up is encouraged. Our DJ will be playing our collection of weird, obscure Christmas music. Word on the street is there's going to be a Krampus pub crawl, and a lot more exciting details that will be announced in the coming days," Fargiorgio said.

Besides the vendors, there is much more to see and do. Local Pin Up Penny Shaut is hosting a Krampus themed Miss Krampusnacht pin up contest at the event. Registration is at noon and is open to the first 25 people who sign up in person. The entrance fee is a new toy donation for Toys for Tots. The contest will be held at 1 p.m. More details can be found on the Facebook event page.