How Erie County went blue again, amidst the tumultuous factors of 2020 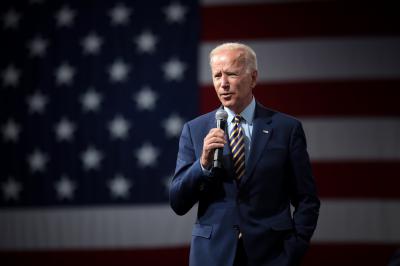 Even before the pandemic landed on American shores, 2020 was poised to be a strange political year. Amid wildfires on the West Coast, Black Lives Matter protests at home and abroad, and the passage of two articles of impeachment by the House of Representatives against President Trump, 29 Democrats lined up to compete for their party's presidential nomination. Some of them you wouldn't know had run and some you will likely never hear from again.

Maryland congressman John Delaney and entrepreneur Andrew Yang announced their candidacies in the second half of 2017, nearly two-and-a-half years before the 2020 Iowa Caucus. However, by the time we rang in 2020, only 14 Democrats remained in the race, the Democratic National Committee had already held six presidential debates, and the money and popular support began to consolidate behind Vice President Joe Biden and Vermont Senator Bernie Sanders.

At the end of February — after Pete Buttigieg had won the Iowa Caucus and finished second in New Hampshire, and Bernie Sanders won New Hampshire and Nevada — South Carolina Rep. James Clyburn, House Majority Whip and de facto leader of his state's Democratic Party, endorsed Biden and all but guaranteed the former vice president a victory in the South Carolina primary on Feb. 29.

Between the South Carolina primary and the 15 primary contests that comprised "Super Tuesday" on March 3, Buttigieg and Minnesota Senator Amy Klobuchar dropped out of the race and endorsed Biden. They were joined by former Texas congressman and presidential hopeful Beto O'Rourke, who exited the race in November 2019. Biden won 10 primaries on March 3, which led to an exodus of most remaining candidates, leaving only Biden and Sanders, who won the remaining five states on Super Tuesday, as the lone contenders for the Democratic nomination.

Most of the primary contestants had endorsed Joe Biden ahead of Wisconsin's April 7 primary. Sanders suspended his campaign the next day, and on April 13 he endorsed Biden as the Democratic Party's presumptive nominee to become the next President of the United States.

A national emergency was declared on March 13 as the coronavirus raged through centers of international travel like California and New York. States began to postpone their primary contests until late spring and early summer in the hope that public health officials would know more about how the virus behaves and how the American people might mitigate its spread. On March 15, the Center for Disease Control advised an eight-week moratorium on gatherings of 50 or more people across the United States, and the following day the nation's chief public health expert, Dr. Anthony Fauci, revised that recommendation to limit gatherings to 10 people or fewer.

The United States led the world in active coronavirus cases by the end of March and electoral politics were all but on hold. Pennsylvania Governor Tom Wolf rescheduled the state's primary election from April 28 to June 2.

Coincidentally, March 13 was also the day that Louisville, Kentucky police kicked in the apartment door of a 26-year-old African American woman, Breonna Taylor, while serving a "no-knock" search warrant. Police entered, firing several shots and killing Taylor in the process.

Taylor's death came just weeks after three white men pursued and fatally shot Ahmaud Arbery, an unarmed 25-year-old-black man, in Glynn County, Georgia, and two months before the murder of George Floyd by a Minneapolis police officer who pinned Floyd to the ground with a knee on Floyd's neck for eight minutes and 46 seconds as Floyd begged for his life.

These incidents reignited the Black Lives Matter movement that began in 2014 in response to the deaths of African Americans at the hands of police. Between the end of May and the end of August, more than 10,600 protests were organized across the country, including in Erie, making police reform and human rights a central focus of 2020 campaigns at all levels of government.

"All Politics are Local"

Despite Pennsylvania's importance in the presidential elections, its place on the primary election calendar has long been a point of contention for those close to the process because the Commonwealth plays a generally less significant role in the selection of party nominees. 2020 was no different. Only nine states voted after Pennsylvania and, of those, only New York had more delegates to award.

Ballots in Erie County included the presidential contest — Biden, Sanders, and Rep. Tulsi Gabbard were on the ballot, although Sanders and Gabbard had previously suspended their campaigns — and Pennsylvania row offices for attorney general, auditor general, and state treasurer, a representative in Congress, as well as State Senate and State Representatives.

Because Erie had voted for Donald Trump in 2016 but had historically voted for Democrats in presidential contests (with the exception of 1984), the national and international press looked to Erie County as a bellwether for Pennsylvania and the nation.

Press from as far away as Brussels and Japan, and major publications including The Guardian and Der Spiegel, made their way to Northwestern Pennsylvania in an attempt to distill the political landscape into a narrative that matched the importance placed on Erie County when at the end of 2019 The Hill named it one of the ten most important counties in America to the outcome of the 2020 presidential election.

In most cases, they found what they were looking for. Whether it was on Main Street in Union City or in suburban Millcreek Township, enthusiasm for this presidential election was extremely high. Almost 138,000 people voted in this election — nearly 20,000 more voters than in 2016 — due, in part, to mail-in voting, which was passed into law in 2019 by the Republican-controlled state legislature.

When the votes were counted, Joe Biden won Erie County by 1,424 votes and subsequently won Pennsylvania by nearly 81,000 votes. Both Erie County and Pennsylvania were blue again at the top of the ticket.

What didn't hold in this election were Biden's coat-tails to carry down-ballot Democrats in Pennsylvania and across the country. The so-called "blue wave" stalled because of two primary factors: First, Democrats nationwide underestimated the turnout by Trump supporters in his re-election effort. Across the country, and particularly in the Midwest, Trump supporters lined up at the polls giving Trump a significant lead on Election Day. That lead, in most cases, did not hold up against the high volume of mail-in and absentee ballots delivered before Nov. 3.

The other major impediment to a Democratic sweep was the fact that moderate Republicans who joined the Biden coalition against Donald Trump were not willing to repudiate the Grand Old Party that has allowed Trump to run roughshod on the nation since 2017. Instead, they remained loyal to Republican candidates down-ballot even if they could no longer vote for the man at the top of their ticket.

As a result of the high Republican turnout and the failure to convert and capitalize on the moderate Republican support for Joe Biden and Kamala Harris, Republicans Tim DeFoor and Stacy Garrity defeated, respectively, Democrats Nina Ahmad and Joe Torsella for the statewide offices of auditor general and state treasurer.

Democrats in Erie County also failed to capture the 49th District State Senate seat held by Republican Dan Laughlin, a popular incumbent who was generally perceived by the electorate as a moderate voice in a partisan legislature. Since the election, however, Laughlin joined with Pennsylvania Senate Republicans to file an Amicus Curiae brief with the U.S. Supreme Court in a since-dismissed case by the State of Texas — the most recent in a litany of frivolous lawsuits attempting to undermine the United States Constitution and overturn the results of the 2020 election.

His challenger, Julie Slomski, charged during the campaign that Laughlin was little more than a Republican pawn who voted with a partisan agenda that favored Trumpism and its destabilizing idiosyncrasies. That charge fell on deaf ears throughout the 49th District in Erie County. Since joining the ranks of Trump's enablers, however, it remains to be seen whether or not Laughlin will continue to hold the trust of Erie voters through a second term.

In the race for the 16th Congressional District, political newcomer Kristy Gnibus, a Democrat, could not take down five-term Republican incumbent Mike Kelly despite defeating him in Erie County and outperforming the Biden/Harris ticket in every 16th District county — Erie, Crawford, Mercer, Lawrence, and Butler. High turnout in this still Republican-heavy district made this contest unwinnable for Democrats, who have only held this seat for one term from 2009-2011.

In spite of the district and statewide losses, Democrats performed well in Erie County. Attorney General Josh Shapiro held his place as the top vote-getter in Erie County — followed by Gnibus and Biden — as he did in his first campaign for attorney general four years ago. Shapiro also earned the most votes of any candidate statewide.

Third District State Representative Ryan Bizzarro, facing the only challenge for a state house race in Erie County, easily defeated Republican Greg Hayes, who earned his way onto the general election ballot by way of a write-in campaign after having his primary nominating petitions voided by a state court for mass forgery of voter signatures. Bizzarro retained his seat with Erie County's largest statistical victory in the 2020 election cycle.

Throughout the 2020 campaign and the many trials that followed, good people stood up for democracy, organizing and working on behalf of candidates who believe in the Constitution and the rule of law.

Despite the shame brought upon the good people of the Commonwealth by Rep. Mike Kelly and his relentless pursuit of nothing as the primary litigant of Trump's non-legal challenges to every court in the land, when the national and international press return to dissect this election there will be but one story to tell: Erie County went blue.

Jim Wertz is a contributing editor and Chairman of the Erie County Democratic Party. He can be reached at jWertz@ErieReader.com and you can follow him on Twitter @jim_wertz