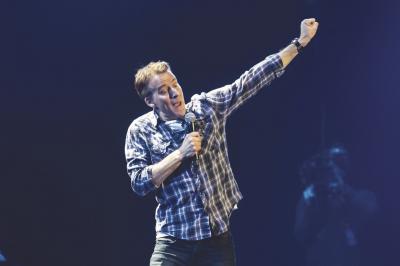 This Thursday, after spending the summer bayside at the Sloppy Duck Saloon, JR's Last Laugh will reopen its doors as The Tonight Show guest and Comedy Central Presents star Juston McKinney leads off the club's new season. As a comedian, McKinney has performed on both of the aforementioned shows and was featured as a member of Bill Engvall's Blue Collar Comedy Tour: Next Generation. He has also appeared in films such as Zookeeper and Here Comes the Boom alongside comedic heavy hitter Kevin James.

Despite the tongue-in-cheek title of his one-hour special ("A Middle-Class Hole"), McKinney's show carries a PG rating, and his act will set a precedent for a year filled with notable names; later in the season, both fresh and returning faces such as Kevin Farley (Black Sheep, The Waterboy), Brian Posehn (The Sarah Silverman Program, Captain Underprants), and Jay Mohr (Saturday Night Live, Jerry Maguire) will appear. — Aaron Mook