Oh How I Want To Break Free

If you think Escape Game Erie won't test your mettle, get out of here (or try) 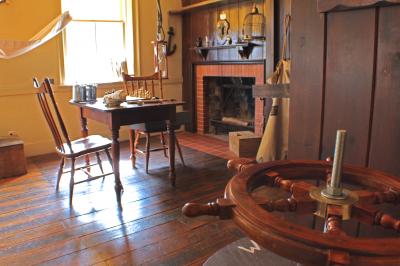 For a so-called "free" people, we sure do spend an awful lot of time dreaming of escapes. Sometimes they're practical — a simple day trip or weekend getaway to break up the rigmarole. Other times they're more fantastical — rope swings in a collapsing temple or parachutes bookending a frantic ski chase or eloping with a comely Scandinavian (who cooks, cleans, and landscapes with a battle ax). Whatever the case, getting out of or away from undesirable situations can trigger feelings ranging from relief to euphoria. To echo Freddie Mercury, we all want to break free…

…Only to walk straight into a trap, because we are soundly logical and rational beings. This little quirk of the human psyche has not slipped past the entertainment industry, which has long sought a captive audience. Enter the escape room (and be sure to close the door behind you). The experience involves you, a group of friends or colleagues, a fictional scenario, and solving a series of themed clues and puzzles to create an escape under a strict time limit. Without teamwork, there is little progress, and without progress there can be no egress (this is not a Proverb, but it is the proverbial key to making your grand exit).

The first real-world escape games were translations of virtual "escape-the-room" games (usually online freeware) and popularized by the Japanese in the late 2000s. From Japan, they were imported to Singapore and eventually the American West Coast. Early puzzles revolved around mathematical sequences and color coding. Meanwhile, alternate versions were being developed independently in Eastern Europe during this same time frame; these centered on finding hidden keys to open a series of locks. Within the past five years, escape games have become a global phenomenon deviously blending both traditions.

At the head of the head-scratcher revolution locally is the husband-wife duo of Dave and Jennifer Wedzik. The couple could not help but love the cunning creations they encountered elsewhere in their travels and looked to begin devising their own. They purchased the Escape Room (then only five months old) from its initial owner in 2016 and immediately set about expansion, acquiring the centuries-old Nicholson House in Millcreek at 4838 W. Ridge Road (on the National Register of Historical Places). Between the original location in the Meiser Building at 23 West 10th and the Nicholson House, the newly rechristened Escape Game Erie was now doubly dumbfounding, going from two rooms to four. A fifth was added last December and a sixth is forthcoming ("Murder at the Winery").

Each new room is a roughly six-month process from concept to completion, including testing (for establishing a time limit and ensuring the mechanics work as intended — no brute force or damaged property should be required of guests). According to Dave, he and his wife take a "hybrid" approach to designing the rooms, collaborating with a consulting team of escape game professionals and contractors to execute their vision. "We wanted a custom design that fit our needs and Erie's needs."

In operating in this fashion, the Wedziks are able to inject some uniquely local flavor into their themes that would not be possible if they purchased "pre-packaged" design blueprints. This is especially relevant with the "Escape the Niagara" game (located in the Nicholson House), which the Erie Reader editorial team recently had the pleasure of botching on the final puzzle. The Wedziks worked in close tandem with the Flagship Niagara League to obtain authentic set pieces and capture the feel of a captain's chamber, "aside from the 5-foot ceilings." The laundry bag, sail, and ropes are all from the ship and the early 1800s naval uniform, while not a commodore's, is as close as they could get. Since the game opened, it has helped raise $3,000 for the Flagship Niagara League.

All the Trappings of a Good Time

We were told not to feel bad about not finishing the game on time, especially with our brain trust weighing in at a meager four cerebrums (the ideal is six to eight), but the taste of failure doesn't go down any easier with the taste of heavily taxed tea we are again drinking under British rule. We could not escape the captain's chamber in time to warn Commodore Oliver Hazard Perry, hero of the Great Lakes, not to come aboard into Her Majesty's clutches. If you and your team do not want to be among the two-thirds responsible for altering the course of U.S. military history, the Wedziks encourage you to use your clues (you can ask for up to three during your session) and stay on track.

"Don't be afraid to use a clue in the first five to 10 minutes," suggests Dave. "Get on point early and if you find something that's leading you somewhere don't stray from it."

As Jennifer explains, "Most escape games have a very linear movement to them."

Also, this intrepid columnist (colonist?) would advise you to scan the ENTIRE room for clues from top to bottom. If something seems too over your head, look up. If you're tripping over a detail, by all means, look down. No matter how you size it up, surveyors agree that time flies when you're having fun. Who knew entrapment could be so liberating?

When he's not polishing British infantrymen's boots or cleaning muskets for shillings on the pound, Matt Swanseger can be reached at mswanseger@eriereader.com. Don't give up the ship.