"We're Through the Looking Glass, People": Horse Girl Is Too Surreal for Its Own Good 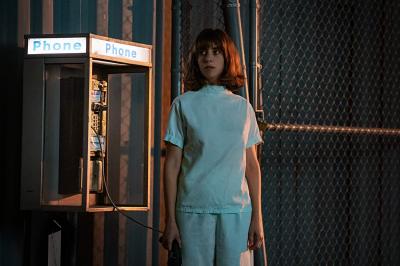 I always welcome "weird" films. Any film that presents its story in an unconventional way and has one foot firmly planted in surrealism is just fine in my book. That made me very interested in seeing Jeff Baena's (Life After Beth, The Little Hours) new film Horse Girl, which promised a character study that also delved into conspiracy theories and otherworldly dream sequences. It sounded like a blast, but sadly, the film has too many things going on to ever be truly compelling and is only salvaged thanks to its lead performance.

The film follows Sarah (Alison Brie), a socially awkward woman who works in an arts and crafts store and spends her free time watching her favorite X-Files-esque supernatural TV show and visiting a horse ranch where she used to take lessons. But at night, Sarah begins dreaming about mysterious lights and strange figures. Soon she's caught in a web of government conspiracies, human cloning experiments, and alien abductions ... or is she a disturbed woman simply having a breakdown?

Brie's performance is the real standout in this film, making Sarah neither a subject of ridicule nor some pure victim too good for this world. Her depiction of social anxiety is painfully real. Unfortunately, as the story unfolds, that performance is overshadowed by the myriad of ideas that all come at once. The film goes in so many directions it's hard to understand what the makers were trying to say. Horse Girl is a noble effort, but for once, I wish it could have dialed back on the surrealism. Horse Girl is currently available on Netflix. — Forest Taylor