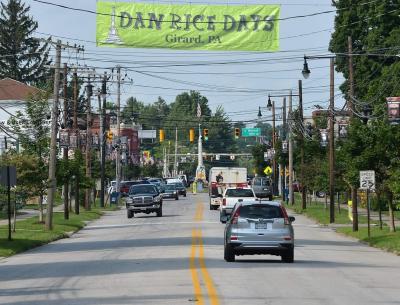 The 56th Annual Dan Rice Days are upon us, and if you're wondering who Dan Rice is, you wouldn't be the only one. Fortunately, that's where things get interesting. Rice was an established circus owner who settled in Girard, Pa. in 1853. His story reads like a classic Disney film; Rice brought his popular circus show to the town only to be met with skepticism from the community. Determined to win the townsfolk over, Rice would elect to build a home in Girard where he would host many social gatherings, boosted by sizable donations to local churches and charities, thus swaying the local population.

There's much more to Rice's story (as can be read on the event website), and he is memorialized with a monument in town and an annual festival. Dan Rice Days hosts just about everything one could hope for in a local festival. There's music from the likes of Tennessee Backporch and the Gem City Jazz Ensemble, chicken dinners, Amish bake sales, a 5k race, a parade, and even a magician. In addition to having something for everyone in the family, all four  Dan Rice Days are free. And unlike the early days of Rice's arrival in Girard, visitors are now encouraged to celebrate and experience the man's legacy as it comes to life.