The only decision is whether to build or spectate. 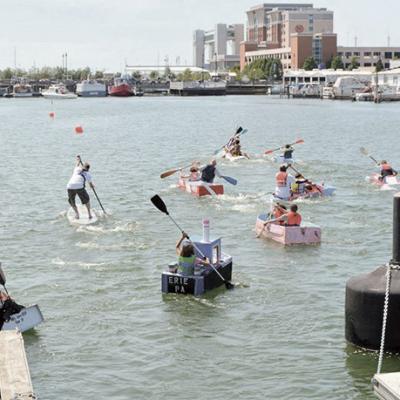 Ever look at your Amazon delivery box and think, "I should make a boat out of that?"

If so, you're in luck. Richard Eisenberg, executive director of the Bayfront Maritime Center (BMC), had the same idea just over seven years ago after attending a cardboard boat regatta at Watkins Glen in New York.

"We held our first regatta in 2010," said Amy Eisenberg, BMC executive assistant, via email. "Since then, the boats have become more elaborate and sea-worthy … but it's still hard to waterproof cardboard."

Over the years, Lake Erie has battled and defeated some of the best-constructed, Duct-tape-layered, original boats to enter the regatta. This boat "melting," as Amy calls it, is not a deterrent for race entrants. Many participants claim that the challenge to design a paper-based vessel with water transportation capabilities is one of the best parts of the event.

"It's the reason we created the 'Most Dramatic Sinking' award," Amy explained. At the Cardboard Boat Regatta, there is fun in both sinking and stroking.

In the inaugural regatta, the AmeriCorp VISTA group exemplified the spirit of the competition when their refrigerator box boat, "The Lake Erie Piranha," took the sink in dramatic fashion.

"The captain went down with the ship … hat still on and in full salute," Amy said.

There is a $35 entry fee per boat, with all proceeds benefitting hands-on maritime programming at BMC.

Spectatorship is free and open to the public. Do, however, bring a few bills (all denominations welcome). The boat that raises the most money by the end of the race (via its assigned donation can) receives the "Crowd Favorite" award, which is especially exciting for the kids who build their own boats.

"Their faces light up every time someone pops money into their can," Amy said. "It's fun to watch."

Erie's 7th Annual Cardboard Boat Regatta is scheduled to sail at noon on Saturday, Aug. 20. Registration is at 10 a.m., followed by a Parade of Boats at 11 a.m. at the East Canal Basin by the BMC campus.  For more information on registration and boat-building rules, visit bayfrontcenter.org/events/cardboard-boat-regatta/.