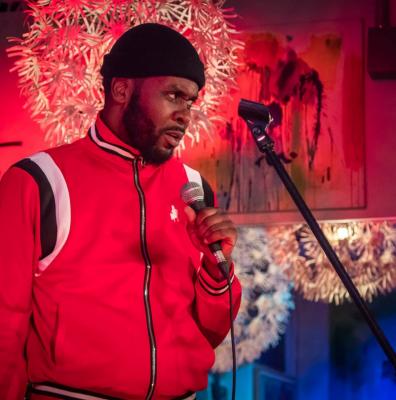 The medium of podcasting has taken the world by storm, with people tuning in from all over the world to hear compelling conversations between engaging individuals. Whether it's movie reviews or debates over music artists, the podcast field seems to be more than lightning captured in a bottle; it's almost a way of life. As if social media wasn't enough of an outlet, the audio sit-down has become a massive way for people to not only branch out their businesses, but to extend their hands to other like-minded souls as well as those of opposing views.

Here in Erie, PA, several podcasts have been making their way online, garnering listeners and viewers throughout the area. Hometown comedian Andre Jenkins, who was ushered into comedy by local comedic heavy hitters Kyle Harris and the late great Dorian Buckner, decided to take his presence onstage to another level.

"Always love and respect to Kyle Harris and Dorian Buckner for letting me in their lane and pushing me to use my gift," says Jenkins. Launching his own podcast now, *Talkin SH#T, the live stream places Jenkins in another light and extends his comedic persona.

Utilizing CAM Studios on West 12th Street for his platform, Jenkins decided to hit the go button on his show in October of 2021.

"I got into it to put my voice and my talents out there for any and everybody to hear," says the comedian. Streaming through Live Waves, Apple TV, Roku TV, and Video On Demand, the show has been receiving positive reviews, which should come as no surprise if you are familiar with Jenkins' naturally humorous personality. "It's a branch of my comedy which is still going strong," Jenkins described.

But if you think that his podcast was the only thing that was in the works, the funny man has done a plethora of shows with some of Hollywood's class acts. "I've done shows with AJ Johnson, Joe Torre, Shanty Shawty, Prince T Dubb, etc." Jenkins has an upcoming show with actor Brian Hooks from the cult classic comedy *3 Strikes. "I'm just happy to be here and blessed with the talent to make people laugh and it's working for me right now." *Talkin SH#T airs every Thursday at 11 a.m. until the young star is actually done talking. As you see, Andre lives up to his own title.