A Birds Eye View of the Turtle Island Quartet at Mercyhurst 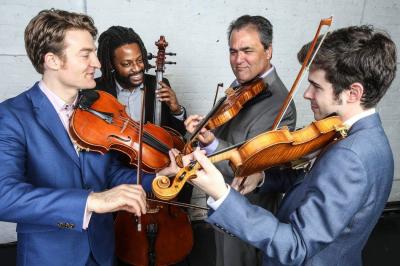 According to Iroquois mythology, before one especially gracious and immense turtle offered up its back, humanity did not even have the ground to stand on. What the legends did not foretell, however, is that the Big Turtle (which the white man rechristened "North America") would become the platform for jazz music in the 20th century. That platform nurtured seminal talents such as Charlie Parker, the virtuoso saxophonist nicknamed "Bird" who helped usher in the bebop movement, which was predicated on nimble melodic lines, rapid chord changes, and new and exciting harmonic ideas.

Parker's body of work was its own Big Turtle, an inspirational springboard for musicians such as violinist David Balakrishnan, who founded the Turtle Island Quartet in 1985. Balakrishnan's group marries classical technique and jazz improvisation, a synthesis that became known as the Third Stream movement. It was a concept that Parker had envisioned and had begun to explore, but died too young to fully realize (at 35 of a heroin overdose). In its three decades of existence, the Turtle Island Quartet has released 18 albums, two of which received Grammy Awards for Best Classical Crossover Album (2005's 4+Four and 2007's A Love Supreme: The Legacy of John Coltrane).

The foursome currently includes Balakrishnan (violin), Alex Hargreaves (violin), Benjamin von Gutzeit (viola — so rare in jazz that clarinetist Paquito D'Rivera compared those who played them to "barking cats"), and Malcom Parson (cello). They pay homage to Parker with their new album Bird's Eye View: The Legend of Charlie Parker, which they will perform as part of Mercyhurst Institute of Art's and Culture's ongoing 2017-18 program. Some of The Bird's best — "Ornithology," "KoKo," and "Dewey Square" — have been reworked and reimagined, spliced with original phrases and elements from elsewhere in jazz and beyond.

If you think of string quartets as boring or stuffy, the Turtle Island Quartet's engaging interplay and compelling sense of rhythm and swing will be quick to disabuse you of that notion. — Matt Swanseger