Shiva Baby is as funny as it is uncomfortable 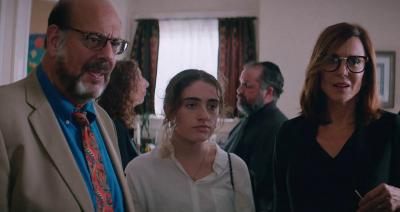 The term "cringe comedy" has been a popular moniker for the past decade-and-a-half and plenty of films and television shows have certainly earned that distinction since that time. However, I don't think anything has so perfectly embodied the description quite like Emma Seligman's Shiva Baby. This is a film that is tense, uncomfortable, anxiety-inducing, and incredibly funny all at the same time. Suffice to say, it's an absolute blast.

We follow a single day in the life of Danielle (Rachel Sennott), a college student who is sleeping with an older man (Danny Deferrari) who's paying her way through law school. That afternoon she attends a family shiva (a traditional Jewish gathering after a funeral) and has to endure awkward conversations with family members whom she hasn't seen in years. But things take a turn for the worse when she learns that the shiva is being attended not only by her ex-girlfriend Maya (Molly Gordon) but also her sugar daddy and his family that she didn't even know about.

With its witty, rapid-fire dialogue and strong performances from an ensemble cast, the film works wonderfully as a comedy. However, the tight, hand-held camerawork and often overbearing soundtrack often make it feel more like a horror film. The end result is a film that is simultaneously funny and nerve-wracking. Seligman does a great job putting us in the protagonist's headspace while her life falls apart during the course of one horrible day. If that sounds like a fun time at the movies, then this film is for you but it may lead some viewers to bouts of anxiety themselves.