To describe The Intergalactic Nemesis – Target Earth: A Live Action Graphic Novel is to attempt to describe many things. Here's what it's not: boring. 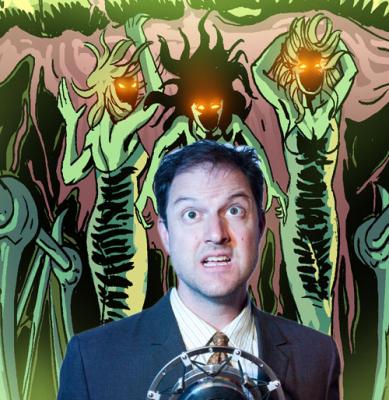 To describe The Intergalactic Nemesis – Target Earth: A Live Action Graphic Novel is to attempt to describe many things. Here's what it's not: boring.

What it is: a mix of radio plays, comic books, live theater, foley artists, multimedia, pure storytelling, and general hysterics.

The premise is actually simple: three actors, a pianist, and a foley artist take the stage, voicing dozens of characters against a backdrop of comic book panels, campy sound effects, and music fit for a radio melodrama/sci-fi serial. The result is an interstellar adventure, but the real fun isn't in the story; it's in the telling of the story.

Now on a world tour – including a stop at the Mary D'Angelo Performing Arts Center – Intergalactic Nemesis enjoyed a limited run on Broadway and sold out the Kennedy Center. It's even received rave reviews from that most venerable of institutions, The Wall Street Journal. Listen, if  WSJ (and NPR, NYT and PBS, and all the other sets of initials to laud this production) is down with The Intergalactic Nemesis, even your grandfather will like it.

If all of that isn't enough to tickle your geeky, nerdy fancy (and if so, what on Earth is wrong with you?), stop by early to chat with the folks from MoreFrames, a local Erie animation studio, and try your hand at animation.

Whether you're into sci-fi comic books, old-school radio, or the simple magic of live theater, Intergalactic Nemesis will not let you down.