A Conversation with George Will

Talking with the nationally syndicated columnist and longstanding political voice 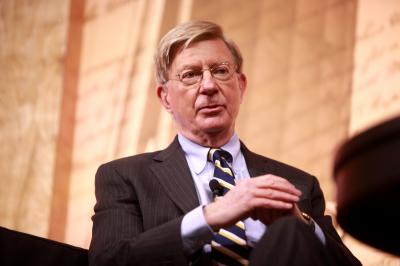 Gage Skidmore
George Will, a syndicated Washington Post columnist and one of the most respected conservative voices in American journalism, will be the featured speaker of the Jefferson Educational Society's Global Summit XI on Nov. 11 at Gannon University's Hammermill Center.

George Will is a Pulitzer Prize winning columnist who was once referred to as "the most powerful journalist in America." Whether or not you agree with him ideologically, he is a writer's writer and Reader readers will appreciate the depth and fierce conviction he brings to the written word. My 20-minute conversation with Will transcended political convention and wove its way into a discussion about America's place in the world, the state of contemporary conservatism, and, yes, baseball as he correctly surmised that Washington Nationals would win this year's World Series. You can read that prognostication on the Erie Reader Facebook page, but you get the rest here.

George Will is the featured speaker of the Jefferson Educational Society Global Summit XI on Nov. 7. You won't want to miss it.

Jim Wertz: It's a beautiful day in Erie, Pa. and at this time of year we appreciate that. How's everything in Washington?

JW: Erie is a Democratic town, as you may have heard, but I think you have more fans among moderate left Democrats today than you ever thought you might.

JW: You've been calling for the rise of a moderate Democrat heading into 2020. What do you make of the changing machinations of the Democratic pool of candidates?

JW: Those marginal candidates as you say, how do they push their way to the front? Is it just a waiting game at this point?

GW: Well, I'm not sure they can push their way. I'm just looking at it objectively. Now, this is another question of who among all the universe of possibilities I'd pick to be president. I think the strongest Democratic candidate took a brief look at it, went "this is not for me" and went home, and that's Senator Sherrod Brown of Ohio. Of those in the race, I think Amy Klobuchar of Minnesota and Michael Bennet of Colorado, both of which are states tending toward purple, are, I think, their strongest candidates. My political predictions are optional folly, but I'll make one. If they were to nominate Bennet, the election's over. It would be a rout; it would be easy. But the nominating electorate has yet to decide how seriously it means it when it says its overriding objective is to defeat the current president.

JW: Why do you think the Democratic establishment is pushing back so hard on Elizabeth Warren as she continues to climb? She's the only one who has really not suffered a dip in the polls on her way to 25 percent. Biden is spending a lot of money to stay up there. If she is gaining momentum — and some people believe she has the potential to reorient to the center since she at one time in her life came from a centrist Democratic place — why push back?

GW: Because a number of her policies are extremely irritating and frightening to a good many people. I mean, you really don't start a presidential campaign by saying "by the way, I'm going to take away private health insurance" from 180 million Americans who rather like it. This, by the way, deeply offends a core Democratic constituency, and that is organized labor, which increasingly exists, primarily to negotiate healthcare's untaxed compensation for its members.

JW: I'm gonna shift gears a little bit. I want to take a step back and talk a little bit about public intellectualism and public intellectual debates. You've been involved in a great many over the course of your career and have been a prominent figure in those debates. Over the course of your life, there have been some profound public intellectual debates, whether they've been between William F. Buckley and Gore Vidal, Buckley and James Baldwin, or Foucault and Chomsky — I'll even include Goldwater and Norman Thomas in there. Is there an intellectual or philosophical debate that's happening in this political moment that people should be paying attention to?

GW: I think there is. I think what is the case today has been the case for awhile. Many of the most interesting arguments are not between conservatives and liberals, but they are among conservatives. Today the debate is whether or not conservatism, meaning a limited government and free market capitalism, is still the core of conservatism, or does conservatism take the shape given to it by the man who currently leads the Republican party. That is to say, absolutely no interest in a balanced budget. We are, after all, running a trillion dollar deficit this year at full-employment, actually over full-employment. There are about 6 million unfilled jobs and two percent growth, which raises the interesting question of what's going to happen when the next recession starts with a trillion dollar deficit. The current president has announced — he announced this as a candidate — that he had absolutely no intention of addressing the problem of entitlements, which everyone knows — including the president — are on an unsustainable path. When this was all explained to him — about the problems with Social Security and especially Medicare — his answer was "yeah, but I won't be here when crisis arrives."

Protectionism. Republicans have long been for free trade because government rarely gets bigger or bossier than it does when it tells the American people what they can purchase in what quantities and at what prices. So, protectionism is the very reverse of conservatism, but now all of a sudden, the Republicans in Congress have said, "well, come to think about it, we didn't mean that either when we defended free trade."

JW: Has conservatism to some extent been replaced or co-opted — at least by the Republican party — if not conservative ideology co-opted by Evangelical Christianity?

GW: I don't think so. Clearly, Evangelical Christians are amazingly loyal to a president who in his personal life is everything they deplore, or at least used to deplore. They're an important part of the base. But today's conservatism, in the sense of doctrine and ideology and principles, has been put on the shelf and it's now a cult of personality. And it's no accident that a party that becomes a cult of personality further devolves into a mob, as we saw yesterday [Oct. 23] when a number of, we'll dignify them as lawmakers, rather lawlessly tried to disrupt the impeachment inquiry.

JW: Should there be consequences for that?

GW: Oh, the House makes its own rules and I don't think any consequences — proper consequences — will be rendered. It should be rendered by voters when they go to examine the people they're sending to Washington to behave this way.

JW: Will traditional conservatives or even moderate Republicans come out and support a Democrat? My clarion call has been that if Republicans care about saving their party or care about conservatism as it is traditionally understood, they should vote Democratic next year. Will they?

GW: I think you're right. Your question — it depends on how hard the Democratic nomination process makes it for tempered people to do that. If the Democrats nominate Bernie Sanders or Elizabeth Warren, it's going to be very difficult to get people who are called "Trump try-ers" — they tried him once and have now had second thoughts. But the Democrats seem — some of them seem absolutely determined to push those voters away.

JW: You recently wrote that impeachment at this moment defies reason and you've made a strong case for that obviously and a case for letting this simply go to the election, but in a broader sense, do you feel that reason has a place or even exists in a post-Trump America? Will it look and be understood in the same way?

GW: It's hard to say. It's an excellent question, but one that's unanswerable now. One Trump election is an aberration, two Trump elections would be a pattern and we would have to say that the Republican party is not just fundamentally but irrevocably changed. I don't think that will happen. If I had to bet my net worth today, I'd certainly bet on someone other that Mr. Trump being inaugurated at noon, January 20th, 2021.

JW: If we are another eight years out and — I realize this is a lot of hypothetical, but we are ceding quite a bit of influence to the president's friend, Mr. Putin, in the Middle East, and North Africa — in order to reclaim some of that influence and reassert ourselves in a post-Trump environment, does that place us, as a nation, in a greater threat of re-sparking the Cold War or perhaps something a bit hotter?

GW: Well I don't think anything hotter, but there's no question it's very hard to put Humpty Dumpty back together again. Alliances rest on trust and trust is an asset that can be quickly squandered and once nations begin to doubt that the United States means what it says, once they see vulnerable but loyal allies such as the Kurds treated such as the way we treated the Kurds, people begin to think "you know it's dangerous to be America's enemy but fatal to be its friend." And that's an extremely dangerous moment.

Jim Wertz is a contributing editor and the chairman of the Erie County Democratic Party. He can be reached at jWertz@ErieReader.com or you can follow him on Twitter @jim_wertz.