A Conversation with Michael Smerconish

Talking politics with the Philadelphia-based author and radio host 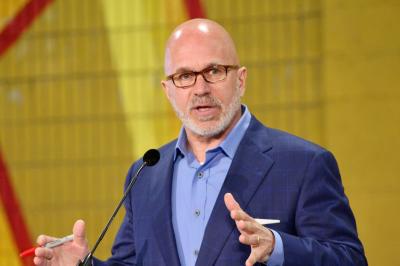 IVN New
Radio host and author Michael Smerconish famously broke with the Republican Party during the 2008 elections, casting his vote for Democratic candidate and eventual President Barack Obama. Hear him talk about increasing polarization among party lines and the minimization of the moderate candidate on Nov. 12 at Gannon University's Yehl Ballroom.

It turns out that Michael Smerconish and I have more in common than a love of politics. We've both spent many hours in some of the best pizza joints and Italian clubs in Southeastern Pennsylvania. That part of the conversation isn't featured here, but it was a starting point that facilitated a greater trust for a tougher conversation about the state of American politics and the impending elections of 2020 — a conversation that is featured below.

Smerconish will be the featured speaker for the Jefferson Educational Society Global Summit XI, in Erie, on Tuesday, Nov. 12. His talk, "American Life in Columns," tells the American story since 9/11.

Jim Wertz: Let's talk impeachment for a minute or two. In your estimation, as you size this up, are Nancy Pelosi and the Democrats headed in the right direction?

Michael Smerconish: I can't say if they're headed in the right direction, but they're certainly headed in a direction that I think will result in impeachment by the House, and probably some form of exoneration or not guilty by the Senate — unless something else happens, which is entirely possible. I don't think that the facts are very much at issue. I think everybody is pretty much telling the same story, whether you rely on the whistleblower complaint, the transcript of that telephone call, what the diplomatic core seemed to be saying under oath — it's not a factual dispute, it's more a matter of whether the facts rise to the level of an impeachable offense, and I think that's going to break largely along partisan lines.

JW: If this does break along partisan lines, and there is no impeachment, is the southern district of New York positioned to be the saving grace of American democracy, or am I overstating?

MS: You mean are they going to move on him in a way that maybe the Senate will not? I think that's always a possibility, but each one of these things carries the possible ramifications that it emboldens him, gives him a victory right in the last hours of this election. So, Democrats have to be very careful.

And just to be clear, I'm not here rooting for or against the impeachment of the president. I'm here just trying to day-by-day analyze what's happening and what it means because I think that's my role.

JW: You famously broke from the GOP in favor of Obama, do you think that we're going to see more prominent Republicans leaving the Republican party in this cycle? Maybe not in favor of the Democratic candidate, but in stark opposition to the incumbent?

MS: In my case, my decision was pre-Trump. I became a Republican when I turned 18 in the spring of 1980 and only voted for Republican presidential candidates up until 2008. I voted for plenty of Democrats, but not at the top of the ticket. And then, I voted for Obama in '08, then became an Independent — or what we refer to as Independents in Pennsylvania.

But my motivation for doing so was that the party by then — no doubt there were changes in my thinking — but the party by then did not resemble the party of the '80s that I joined. All of the moderates were gone. Arlen Specter [the long-serving Republican Senator of Pennsylvania, who switched his affiliation to Democrat in his last term] was not only a personal friend and mentor, but someone for whom I had worked and to me he was kind of the epitome of what I was looking for: independent-thinking, going to piss people off from time to time because they'll be disappointed in what you do, but he was always going to bring some critical thinking to it and that's what I found to be in such short supply. So I got out. Many others have gotten out for their own reasons since then, but I think the exodus is over. If you're still in as of today, you must like what you see.

JW: I think here in Erie County, as you're thinking about your analysis and preparing [for your talk], so much attention has been paid to Erie because it swung for Trump in 2016, I feel obligated to point out that Erie has remained strong for Democratic candidates statewide — Attorney General Shapiro, and [Pennsylvania Treasurer] Joe Torsella among them — who had much stronger vote counts than Trump. It's an interesting political moment because — more than talking about ideology and more than talking about particular issues, it seems like we've moved into an era of politics where we're really committed to the political characters and characterization. Is this shift something that's going to stick in this "media moment" that we have? As you're talking to other pundits and other politicians, are we going to continue to be hung up on the cult of personality? Or are we going to be able to move back into an era where we think more about policy?

MS: I don't see any of this ending any time soon. I don't think it's a strictly Trump phenomenon. I think that much of what's going on in our country is going on around the globe. I think the Brexit movement is related to some of the same kind of angst that some people have about the future, largely the demographic shifts in the future. And as I have said many times on the radio, the factors that elected Donald Trump will — politically speaking — outlive him. Those people will still be among us. And they want their own form of change.

JW: You were at the [Oct. 15] debate. Everybody talks about electability in terms of the Democratic candidate, and Biden came into the race with some air of inevitability that seems to be shaken a little bit. What are you looking for in those debates as you're analyzing those candidates on stage, maybe even thinking about some of the folks who didn't make the stage? We still have a long way to go until Super Tuesday.

MS: Yeah, no doubt. And remember that the Democratic system is a proportionate system, not a winner-take-all system. I sent out a tweet last night while I was sitting in that hall watching the stage with 12 people on it, where I said, "It occurs to me this could go on for a long time, maybe even til the convention."

JW: If it goes to the convention at this point, do you see anybody outside of the top three working their way in there and trying to carry it home, or does everybody start to line up as they move toward June?

MS: There are so many people who are in this race, I can't think of anybody who isn't — Sherrod Brown maybe? I don't buy into any of the Hillary business, although I'm sure she'd love it, but I don't see that in the cards. No, I think the nominee was standing on that stage last night. I think it's a wide-open race at this point, and crazy things will continue to happen. There's no way of knowing where that ball is going to bounce next.

JW: Six months ago, would you imagine that Andrew Yang was in fifth or sixth place?

MS: Uh, no. Nor would I have imagined that there would be a telephone call from the president to the president of Ukraine to really fire up the impeachment probe. I find myself saying time and time again, none of us could have ever imagined this. And then whatever this is, changes.

JW: There were a lot of voices on stage last night. It seemed to get a little unruly at times, particularly in the 45 minutes or so that they let everybody kind of have their way with Elizabeth Warren. How would you manage a stage like that with 12 big personalities on it?

MS: What I would do — and I and what I'm telling you now is something I told [DNC Chairman] Tom Perez and I don't know if he thought I was serious, but I was serious — I think they should split into brackets, March Madness-style, not necessarily with victors, but let two people square off one on one for 30 minutes. Give us four of those pairings on a particular night. And then mix it up again, and mix it up again, and mix it up again. I mean, what did you like to see? You know, Bernie and Buttigieg, or Biden and Andrew Yang, take your pick, and constantly shuffle the deck and let us get a look at that. I think there'd be tremendous interest.

JW: Let's talk about your time in Erie. What can the audience expect when you get here?

MS: So last year, I published a book called Clowns to the Left of me Jokers to the Right: American Life in Columns. The book is a collection of 100 newspaper columns published in the first 15 years post-9/11, in either the Philadelphia Inquirer or Daily News. Most of them were then picked up in newspapers across the country and the 100 columns I selected from the 1,047 that I published in that 15 year time period. So I went back through the archives of the paper, and I looked at every one of my bylines, and I selected 100 of them that I thought were my more memorable — some because I really got it wrong, some because I really got it right, and some because I just think it told a good story. Then, I started to speak in support of the book, a speech that I call "American Life in Columns." It's basically storytelling, hopefully with a common thread, and with a message about the polarized climate in which we live.

JW: It sounds fantastic. We can't wait to hear you tell some of those stories. You are a great storyteller.

MS: You're nice to say that.

JW: I just had one last question for you. You've been telling these stories for a long time, and writing them for a long time, and the book gave you an opportunity to reflect upon them. If you had to summarize a takeaway about the state of the nation or the way that this country has evolved over the time that you've been watching and working in politics and thinking about life in politics, what's the big picture?

MS: I think that the election of Donald Trump was 30 years in the making. I attribute the current partisanship largely to men with microphones. That may sound odd coming from somebody who earns his keep behind a microphone, but I think that he was the beneficiary of a climate that was building for a while, and that we've conflated entertainment and news. And until people begin to change the channel, we're not going to get out of this ditch.

Why Erie's Downtown is a Proxy for the Nation

Pivoting Your Business Model During a Crisis

Food Security at an Insecure Time

by Erie Reader Staff3/29/2020, 11:00 AM
An updated list of eateries throughout the county open for business