A Day in the Life of Kathy Dahlkemper 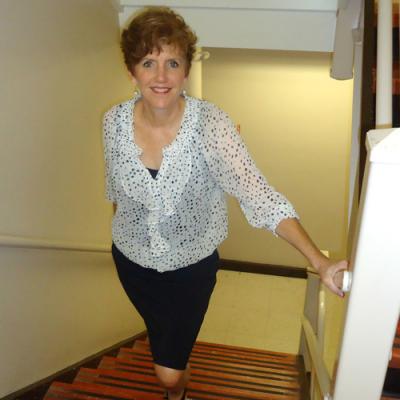 "I am committed to making Erie County a more vibrant and safer place to live," Dahlkemper said to a conference center full of Erie business leaders. "In 2015, we concluded the Destination Erie study and launched Emerge 2040 as the means to implement our community's strategic vision for the future. Our collective priority moving forward must be to create a thriving community full of economic opportunity."

At the conclusion of the breakfast, Dahlkemper headed to the courthouse, waved at the security camera on her way through the double security doors, and took the six flights of stairs to the County Executive office. She arrived at 9:22 a.m., slightly short of breath after the climb, but smiling when she saw me waiting in the outer office. And just like that, the sprint began.

We walked to Dahlkemper's forest green office with a view of the lake. On a counter-height shelf sat the top portion of an old podium, like the kind that teachers use at assemblies.

"When I saw that nobody was using this, I asked if I could put it in my office. Now it's my stand-up desk," Dahlkemper said, smiling.

Research by James Levine, an endocrinologist at the Mayo Clinic, has demonstrated that sedentary lifestyles are detrimental to our all-around well-being and cannot be fixed with an hour or two in the gym.

"The default has become to sit," Levine said in a 2014 Smithsonian Magazine interview. "We need the default to be standing."

Standing by default can be challenging in a day of back-to-back meetings, making stairs and stand-up desks that much more necessary.

"When I first took office, I asked, 'What are we doing about wellness?'" Dahlkemper began. "I take the stairs and I put up signs encouraging everyone in the building to take the stairs, but otherwise, there was very little being done. So I asked Sabrina to help drive the efforts of improving wellness of county employees."

"We first developed a wellness committee," Fischer said. "We set goals for increased employee participation in Highmark's annual biometric screenings, developed the 10 & 10 program – a weight reduction program of 10 pounds in 10 weeks – and added lunch hour yoga on Mondays. Biometric screening participation went up from three to 10 percent in a single year, four departments participated in the 10 & 10 program, and the yoga sign-up sheet filled within two days of the announcement of the first class."

"I realize this all comes from the top," Dahlkemper said. "If I want others to do this – to take the stairs and do biometric screenings – I have to do it, too. The main goal is to enable people to live better quality lives because their health is good and they feel good. In the end, we will also save taxpayer dollars."

"Highmark guides our wellness programming goals with figures they obtain through extensive studies," Fischer added. According to the figure Highmark provided Fischer, a 10 percent Erie county employee participation rate in the wellness program could lead to a 2016 savings in health care costs of $214,960.

As discussion turned to plans for a county employee health fair, the meeting ticked past the scheduled departure time of 10 a.m. for the Erie County Department of Health (ECDoH) and Dahlkemper was already walking out the door as I shoved papers in a bag and dangled my coat from one arm – a practice that promised to repeat itself throughout the day as I attempted to keep up with her. Down the stairs of the courthouse we went, over the few blocks of slush-covered streets, and up two flights of stairs to another office, this time that of Melissa Lyon, Director of the ECDoH.

"We are putting together a plan to offer mini-grants for Erie City schools to plant their own gardens," Bolash said. "Students grow their own food and take it home. This year, excess food will go to the stores participating in the Healthy Corner Store Initiative."

Mirrored off a program developed and maintained in Philadelphia through the Food Trust Organization, the Healthy Corner Store Initiative provides residents living in food desert regions of Erie County a partial solution to a growing problem. The 2015 Erie County Community Health Needs Assessment showed 10 food deserts in Erie County, seven of which were located inside the city. The ECDoH defines a food desert as any region in which one-third of community residents live more than one mile from a grocery store. The seven food deserts in the city of Erie directly affect an estimated 22,000 residents and possibly as many as 77,000. Most food deserts exist in low-income neighborhoods where residents have little or no access to transportation.

After a brief update on Let's Move Outside, a tour of 15 walking and biking trails throughout Erie County sponsored by the ECDoH, and more recently by Wegmans, we were off and running again for the next meeting: three flights down to the basement of the ECDoH building.

The second meeting served as follow-up to the conversation Dahlkemper started with her staff regarding Erie County lead levels and water quality after news of the Flint, Michigan water crisis broke last fall.

"Monitoring lead levels in children is always a matter of funding," said Char Berringer, Director of Community Health Services. "For years, we tested children living in high-risk areas or circumstances. But the funding ran out and we stopped doing regular testing." Berringer pointed out that funds frequently become available again following a crisis. Dahlkemper and Berringer discussed the possibility of a fax blast for schools and community centers detailing the risks of lead exposure, then Dahlkemper stood up, thanked everyone for their efforts, and it was grab-and-go time again.

We departed the ECDoH for an Elected Women luncheon led by Judge Stephanie Domitrovich regarding the group's adopted organization, Nurturing Hearts, a nonprofit that provides 6-month programs for girls ages 10-18 for the purposes of positive self-development and healthy lifestyle building. The elected officials decided to plan a future field trip for the girls and the luncheon adjourned almost as soon as it started.

Dahlkemper described the summer jobs program she developed for youth in underserved areas, which includes interview and on-the-job training. "It's a great opportunity for our young people to see what kinds of opportunities are out there … let them see what the world can be. They realize what's possible in their own lives," Dahlkemper said.

On the way back to the courthouse, I asked Dahlkemper to explain her personal definition of community health.

"For me, community health encompasses all aspects of life, from personal safety to physical health to financial security," she answered. She described the summer jobs program she developed for youth in underserved areas, which includes interview and on-the-job training.

"It's a great opportunity for our young people to see what kinds of opportunities are out there … let them see what the world can be. They realize what's possible in their own lives," Dahlkemper said.

Back at the courthouse, Dahlkemper attended a 1:30 p.m. DevelopErie meeting before heading to the Planning Department open house on the third floor of the Blasco Library building. Then she delivered a ribbon cutting speech at 3:10 p.m.

After spending the day with Dahlkemper, the importance of the Planning Department was evident without explanation. Their responsibilities include such programs as recycling, farmland preservation, and the Greenways grant, which provides funding for the Erie community's natural, scenic, and recreational resources — all of which are aspects Dahlkemper strongly believes will improve community health and life quality for county residents and increase the chances of new residents and businesses moving to Erie County.

Nearly 11 hours, four meetings, a breakfast, a luncheon, a planned field trip for at-risk youth, an open house, two speeches, and hundreds of stairs into her day, Dahlkemper returned to the stand-up desk in her forest green office, committed to making Erie County a more vibrant and safer place to live.

Ti Sumner can be contacted at tSumner@ErieReader.com