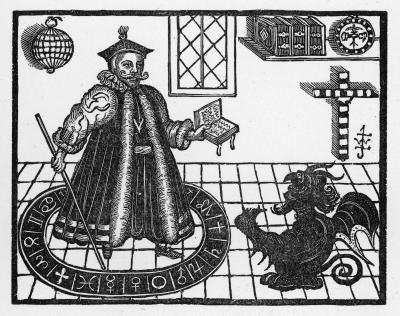 Archivist
The frontispiece from the 1620 edition of The Tragical History of the Life and Death of Doctor Faustus by Christopher Marlowe, the play's best-known source material

Suffering from a chronic case of existential fatigue and ennui? Is personal success dragging you down?

You might try summoning a demon — although this remedy is fabled to come with some nasty side effects. Such goes the legend of Johann Georg Faust (aka John Faustus), an alchemist, astrologer, and magician of the German Renaissance who would posthumously inspire numerous works of theater and literature. Most notable of these is Elizabethan playwright Christopher Marlowe's The Tragical History of the Life and Death of Doctor Faustus, more commonly and concisely known as Doctor Faustus.

In this tragedy (interspersed with comic interludes), a bored Renaissance intellectual strikes a bargain with Lucifer — infinite knowledge and worldly pleasures for a limited time in exchange for his soul. Appointed to make all that magic happen is the infernal agent Mephistopheles. Deeply rooted in Christianity, the play examines themes of temptation, sin, and redemption, along with the oft-repeated trope of "making a deal with the devil" and the associated costs.

Prolific American playwright Don Nigro's 1978 adaptation puts a compelling twist on the tale — Mephistopheles is kind of a babe, and she's kind of just his type. Faustus is held spellbound by the ineffable beauty of the brooding young demoness, which makes these contract term limits literally hell to pay.