A Dream of Mythic Proportions: May Ballet in Erie

Not a soccer mom.  Not a trainer, timer, conditioner, or goalkeeper. I am a ballet mom. 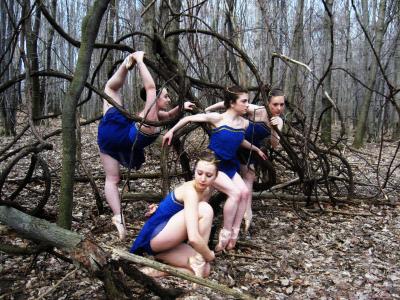 I am not a soccer mom.  So I am not a trainer, timer, conditioner, or goalkeeper.

I am a ballet mom. So I am a beautician, cosmetologist, fan club president, and leotard washer.

It's somewhat cliché to have a daughter who dances. It's also somewhat cliché that my daughter wants to be a ballerina. It was all cliché until I realized no matter what time of day, I can always hear the gentle skiff of her toes on the hardwood floors of her bedroom as she practices a routine, followed by the not-so-delicate thump as she lands. Or, when I realized she doesn't walk down a lengthy hallway without bounding into a leap, whenever she has open space, in fact, she goes into flight. Then I realized, wow, that leap was pretty good. She's 8 and she has real passion. She doesn't want to be a ballerina. "I want to be a professional dancer," she says. Professional dancer? In Erie?

She studies at Lake Erie Ballet, formerly the Lake Erie Civic Ballet, which is Erie's oldest dance company and host of the annual Christmas tradition "The Nutcracker," performed on the stage of the majestic Warner Theatre. Cliché? "You cannot change 'The Nutcracker,'" admits Alethea Bodine, executive director of LEB. "The Nutcracker's" audience has certain expectations: the familiar narrative, the conventional choreography; even the costumes are dictated by tradition. And that's OK. These traditions are the foundation for classical ballet, but they are not Bodine's passion. While preparation for "The Nutcracker" spans fall and winter, Bodine finally gets to indulge in dance innovation once the snow melts.

On May 13 and 14, the LEB Company will present "Women of Myth"on the Dafmark Dance Theatre presentation space on State Street. The title of the show immediately intrigued me— igniting my inner English major, calling to mind Greek and Roman goddesses from ancient literature. But even though Bodine's piece is actually inspired by the Greek muses—the  nine sisters who arouse artists and scholars—the show has a modern message.

"Most women today are expected to live lives of mythic proportion," explains Bodine. "They have to juggle being a mother, the nurturer, the lover, the provider….the sense of leadership and providing direction in the family or at work. It's a little insane. We all need heroes, but a lot of the time we don't realize: we're the heroes." She was preaching to the choir. Every young woman I know, especially those who are mothers, are under a great deal a pressure to be this 'woman of mythic proportion.'

Ironically, it is usually because of our hyperactive lives that we don't feel we have the time to sit through a ballet. But Bodine, so aware of the loose hold she has on her modern audience, scaled the show down to one hour. The segments are transitory and the longest, choreographed by Bodine herself, comes forth in short nuggets, perfect for the contemporary attention span.

Her piece is about civility: the ultimate ability of human beings. The muses represent the best and worst of being human, and each dancer represents a specific quality. The dance is set the music of Leonard Cohen, Laura Nyro, Elton John, Joni Mitchell, and David Bowie, and the ballet's accessibility excites Bodine. "[This show] is a door you can walk through easily."

The second piece, choreographed by artist in residence, Christina-Maria Adelhardt, "Is the strongest piece in the program," says Bodine. She likens the dance to heady short story or a novella.

The third, created by Mercyhurst College Dance Department senior, Sarah Mastracola, tells the story of the women's rights movement through history. The first movement is defiant and angular, as Mastracola attempts to identify with the frustrations of women in the 1960s and '70s. The second movement is softer: "the return of the feminine." The third movement in the trilogy represents the modern woman, who has come to terms with the mythic proportion of her life.

Finally, Edinboro University senior Holly Anderson will present "Earth Intruders," which will feature the LEB Junior Company, the youngest of which is just 9 years-old. The classical ballet piece is set to music by Bjork, and Bodine describes the movement as "primitive human animal" amidst the raging stimulation of technology. This age group in particular must negotiate this chaotic world, even at the tender age of 9. My daughter is growing up in that world. I understand the pressure of trying to maintain her innocence in a world that seems armed and ready, yet I had never considered the challenges of teaching classical ballet in this video-iPod-every-piece-of-entertain-at-your-fingertips world. Thankfully, Bodine thinks about it all the time.

"I am [aware] of…the increasing demand our environment has on us. We have to split our attention in 10 different directions in any given moment…for extended periods of time and I don't think it's healthy," Bodine says. "I think when the kids come to class it's a welcomed vacation from [the world]." It's a sanctuary where "technical" refers only to their movement. The music is calm. The girls are dressed the same. Life isn't screaming at them. The LEB JrC seems to understand how lucky they are to have dance as an escape from the 21st century.

Later in the month, the Lake Erie Academy of Dance (LEAD), which is currently featuring 140 students in a production of "The Little Mermaid," will join the LEB JrC on the stage. Bodine warns me not to expect Disney's Ariel and Sebastian. The LEAD production will feature a modified retelling of Hans Christian Anderson's mermaid tale. "It's really fun and innocent." The tale is a story about Fae, the littlest mermaid, performed by Victoria Quirk, her sacrifice and the rewards of selfless love. To preserve the innocence, Bodine added a Disney-esque happy ending.

But out of myth and back to reality. A studio door opens and eight 'tweens, my daughter included, have finished rehearsing "The Little Mermaid" for the day. I'm reminded of the LEB JrC piece in the upcoming "Women of Myth." The girls here, all huddled together on the stairs giggling, are a seamless horizon of black and pink with identical tightly wound buns. They aren't primitive. If anything, they are a throwback to a calmer era when the simplest of qualities mattered. At their age, they probably understand the lesson of "The Little Mermaid" better than I do. In reality, my daughter could probably teach me a thing or two about her world. Will she grow to be professional dancer? It doesn't matter. No matter what she does, I know it will be of mythic proportion.