A Drink for the Roses

What else besides big hats goes hand in hand with the Kentucky Derby? Mint Juleps. And this week, Melissa Bruno's mixing one up for you. 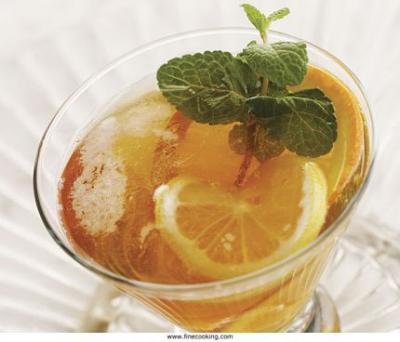 For over a century, the sweet cocktail of mint and bourbon has been the celebrated drink of the most famous horse race, the Kentucky Derby, which is held the first Saturday of each May at the prominent Churchill Downs. Saturday, May 7, 2011 will see the 137th Run for the Roses.

Considered "the most exciting two minutes in sports," the Kentucky Derby has been long celebrated—and for animal-activists – vilified—as the most popular day in horseracing. However, the derby's horses are not the only things that need to achieve excellence that day. The Mint Julep—and a ridiculously giant hat for the ladies—follow close behind.

So where did the Mint Julep come from? Why is it considered the "official" drink of the Kentucky Derby? And why is the drink, for the majority of us, only popular on one day of the year?

To start, Greek mythology tells of two weary travelers who could not find help or hospitality while on the road. Finally, an old couple took them in, laid mint on a dining board to refresh it, and prepared a meal for the strangers. The travelers, who turned out to be gods in disguise, rewarded the old folks by transforming their little hut into a glorious temple. Thereafter, mint was considered a symbol of hospitality.

The French word "Julep" is derived from the Persian "Gulab"—a sweet concoction that may have been a vehicle for medicine during the 1700s… You know, a spoonful of sugar helps the medicine go down.

As history reveals, the Mint Julep was probably first served in the early to mid-1700s in Maryland, Virginia, or North Carolina. The name "Mint Julep" first appeared in print in 1803 described as a, "Dram of spirituous liquor that has mint in it, taken by Virginians in the morning."  In particular, South Carolinians claim the Mint Julep as their drink—after all, they are known for their southern hospitality.  The first Mint Juleps were made with rum (today's Mojito), rye whiskey, or any other available spirits.

Later, sometime during the 19th century, many Kentucky farmers began running stills, which they used to make corn whiskey or what is now called bourbon. Once Kentucky bourbon was more widely distributed and began being used as the drink's preferred spirit, the tradition of sipping Mint Juleps soon became associated with horse racing.

But there is no clear answer why this association came to be—many sources cite the growing popularity of Kentucky bourbon and horseracing within the state as going hand-in-hand, literally. For this reason, the people of Kentucky—particularly Louisville—now lay claim to the drink's inception.

As documented in an 1816 issue of the Kentucky Gazette, Mint Julep Cups began being awarded as prizes at horse races in the state. Legend has it that mint was planted outside the club house of Churchill Downs in Louisville so that Mint Juleps could be served at the first Kentucky Derby in 1875. In 1939, Churchill Downs contracted the Libby Glass Company to make colorful commemorative glasses for Juleps sold at the race. These metallic silver glasses have now become as popular as the drink itself on derby day.

Back then, the ingredients of the Mint Julep were bourbon and mint. But the Kentucky bourbon distilleries noted that, "The biggest change for the Julep was the addition of American whiskey to the recipe."

Now, for a mini primer on the whiskey vs. bourbon conundrum: To be considered bourbon, the whiskey must be made in the state of Kentucky or aged in new oak barrels for a minimum of two years; anything else is just plain old whiskey (a.k.a. American whiskey).

Therefore, the addition of American whiskey was considered a crushing blow to Kentucky, and the culture that surrounded it. To counter-act this blow, the bourbon distilleries in Kentucky quickly transformed the Mint Julep into a mixture of water, sugar, mint leaves, and good Kentucky bourbon—something that general American whiskey could not contend with at the time. And to be sure that people would drink the new Julep in Louisville during the Kentucky Derby, race organizers developed—and eventually executed—an aggressive marketing plan revolving around the drink, which is why the Mint Julep is so popular on derby day.

From the Kentucky Derby's inception, Maker's Mark bourbon was considered the official spirit to make trackside Mint Juleps. But, within the last two decades, Churchill Downs has seen a dramatic decrease in derby attendees (almost 70 percent), and have subsequently began using a lesser quality spirit in order to ease the price per Mint Julep.  As of 1995, the new official, and cheaper, bourbon of the derby is Early Times bourbon.   However, for an upcharge of $14, you can still get a Julep with the classic Maker's Mark on race day.

On the Saturday of the Kentucky Derby alone, Churchill Downs sells close to 80,000 Mint Juleps. Even for a crowd of 145,000 plus, that is a lot of minty bourbon.  Yet, the Downs says it is lucky to sell 100 Mint Juleps on any other day at the track.

Vice President of Media Relations for Greater Louisville even went as far as declaring in a press statement, "You can't be a genuine citizen of Louisville unless you drink one mint julep a year."

Obviously, for many, this comes on Kentucky Derby day. But why is the drink not equally as popular throughout the year or during any other horserace?

For starters, the Mint Julep can be a bit hard to find outside of derby day. Many bars do not keep mint in stock, and if they do, it usually gets used in a mojito, the much more popular cousin of the Mint Julep. Secondly, many bars do not have finely crushed or shaved ice, which the traditional recipe calls for. This means the bartender has to pound ice by hand, which takes time and effort, and most times, the unsatisfied look the bartender gives you upon ordering a Mint Julep will be enough to make you change your order.

As for Erie, you might have a hard time finding a Mint Julep, but you  have a better chance on derby day. Since opening its doors in 2007, Presque Isle Downs & Casino has helped celebrate the Kentucky Derby by featuring the Mint Julep on race day.  Therefore, if you are hankering for some minty bourbon goodness, this Saturday at the casino is where you will want to belly up to the bar—or racetrack.

Although many southerners will say that a Yankee cannot make a proper Mint Julep, these drinks are actually quite easy to make if you have the right ingredients. Also note, this is a drink that should be sipped, not gulped or slurped through a straw—the idea is to get your nose into the glass to absorb the smell and taste of the mint.

Make a simple syrup by boiling the sugar and water together for about five minutes (or until the sugar is fully dissolved). Cool and place in a covered container with six or eight sprigs of fresh mint, then refrigerate overnight. Make one Julep at a time by filling a Julep cup with crushed/shaved ice, adding one ounce of mint syrup and two ounces of bourbon. Stir rapidly with a spoon to frost the outside of the cup. Garnish with a sprig of fresh mint.