A Gem in the Forest: Asbury Woods

A man who wanted space away from the daily grind bought land in Millcreek. He donated it to the school district and it's since become a local destination spot for those seeking nature. Michael Bennett wanted to find out more so he headed off into the woods. 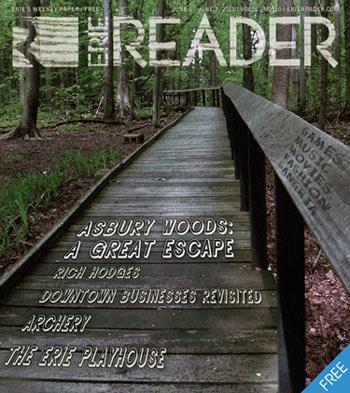 In the late 1800s, Moritz Behrend was running three paper mills on the property of Prussian Chancellor Otto von Bismarck. One of the mills was called Hammermühle; two of his sons began their training in the industry there.

By 1898, the two sons and their father had moved to America and found their way to Erie where they co-founded the Hammermill Paper Company.

By 1920, the younger son, Dr. Otto Behrend, needed an escape from the work-a-day world of city living. He purchased 118 acres of land in Millcreek that had been a farm since the 1790s. Behrend maintained some of the land as a farm, raised dogs, and imported and planted trees, herbs, and flowers around his country retreat.

In 1954, he adjusted his will to bequeath his property to the Millcreek Township School District.

Through one man's gift, and the vision of leaders in the community, Asbury Woods Nature Center was born. It is a place of wonder and beauty, an outdoor dreamscape full of flora and fauna capable of setting your mind at ease.

For the last 14 years, Biologist Brian Winslow has been the director of Asbury Woods, overseeing some of the largest growth and development the center has ever experienced.

"I'm sure that Otto Behrend never dreamed what his gift would be," Winslow said. "He saw Millcreek was quickly becoming a bedroom community and he loved this place and he wanted it to be preserved. The concept of a nature center and the whole conservation thing was just getting started in the 1950s and I'm sure he was aware of it because a lot of parks and estates were getting started then."

The original cottage, built by Behrend in 1931, is still part of the main building at Asbury Woods. For a long time, it was the only structure at the center and had to serve a variety of needs.

According to Winslow, there were land-use studies done in the 1980s that showed the tiny building and the surrounding acres were being overused and the trail system was being abused.

"When I started, it was the cottage and a little garage and basically a single lane driveway that was just a wedge of pavement that we called the parking lot," Winslow said. "We would set up the one room, have class, set up microscopes, eat lunch there all at the same time. We would hang a sign on the backdoor for the UPS guy or whoever, saying, 'Class is in session come back later.' I hated that sign."

The sign is no longer in use. The Nature Center has now expanded to provide space for offices, multi-purpose rooms, the gift shop, and an indoor environmental display featuring local wildlife in a maintained, zoo-quality habitat. The new building was constructed using "green" technology and boasts Erie's first vegetative roof, which cuts down on maintenance and energy costs.

The building is not the only expansion of the old Behrend property. The original 100 acres has now blossomed into 205 acres of fields, forests, and wetlands, with four and a half miles of trails.

In the 1980s, the school district purchased Brown's Farm on Sterretania Road with the intention of building a new school there.

"There were wetlands on the property, and it wasn't a good place to build a school," Winslow said. "Luckily the cross-country team started using it as a trail and put a ropes course on it. So when the school couldn't be built there and was eventually built across the street, they said, 'Hey we're getting pretty close to Brown's Farm, can we connect Asbury Woods on the north with Brown's Farm on the south?'"

Through another donation of 25 acres from adjacent landowners, there is now a greenway connector from Asbury Park to Brown's Farm.

The center operates through a public-private partnership between the Millcreek School District and the non-profit Asbury Woods Partnership. Each side makes up an equal share of the operating costs, the district through the school budget, the partnership through donations and fundraising.

Recently, Asbury Woods came up as a possible cut to solve budget shortfall. The school board eventually tabled any thoughts of cutting the funding for Asbury Woods.

Accordingto Mark Shaw, Asbury Woods Partnership president-elect, "The Partnership does not view the Nature Center as a luxury, but rather as a necessity in a world that must focus on sustainability and society's impacts on the environment. The elimination of funding to the Nature Center would have a devastating effect."

Asbury Woods is not simply a beautiful green space in the middle of Millcreek. The main mission is environmental education; the educational aspects of the center are written into the educational curriculum of the Millcreek Schools.

"We believe if people, and especially students, understand the environment and the concept of habitat and diversity and adaptation they will make the right decisions," Winslow said. "We don't preach."

The connection with the school district allows students the opportunity to study outside the classroom, year after year, from kindergarten through eighth grade. Each year the focus shifts and builds upon the lessons of the pervious year. Last year, students learned about natural habitats, this year they are learning about the carrying capacity of the environment.

"One of the great building blocks of education is repetition, and being able to see these kids year after year really makes an impact," Winslow said.

There is no test to prove an appreciation of nature. There is no metric to measure enthusiasm, which makes it difficult to provide the hard data or even raw numbers to attach to grant applications in these hard economic times, when businesses and foundations are looking for results. Yet Winslow sees the anecdotal evidence everyday.

"You see kids walking around on the weekends telling their parents, 'Let me show you the bees, look there's the queen.' I think it sinks in," he said. "We hold contests to recycle garbage after lunch. Whichever class can create the least amount of garbage wins. Parents come up and tell me, 'Now my kid won't take anything unless they have stuff that can be recycled.' They get the message.

"People say, 'Do we really need that?' I'd argue you do… In real life you don't sit down and say, 'I'm going to do an hour of math or language arts…' we incorporate math and science and art into all our programs," Winslow said.

The opportunities for learning at Asbury Woods are immediately applicable to the outside world as well. If not in the sciences, repeated trips to Asbury Woods can spark all kinds of interest in creativity and other fields of study.

"Our volunteer program has a huge impact on people's lives as well," Winslow said about the high school students who give their time to work at the nature center. "I think there are between two and four of our former volunteers who are teachers in the Millcreek School District right now. Others are working at zoos and parks, one at the Department of Energy working on sustainable energy so I know those kids who really immerse themselves get real world experience out of it."

In fact, the current development director of Asbury Woods, Jennifer Burke, was inspired to her career path by visiting the woods.

"I remember when I was 16 and had just learned to drive and it was one of the first places I went to. I turned up the little gravel road, the nature center wasn't open, so I just wandered around the trails and found the swamp and just thought to myself, I love this place," said Burke, a Fairview native. "I ended up working in Central Park, really getting into and working with landscape design. The whole time I was there we learned how the park was designed to model a landscape painting, modeled after Hyde Park in London, they even put in sheep like you would dot in an impressionist painting. That experience of the designers was brilliant, it is all man made and they worked it so every time you go around another bend it's like you're stepping into another frame of an impressionist painting. To me, all I could think about when I was working there was Asbury Woods. Because the trails naturally, which some are just old deer trails, did that."

Aside from Central Park, Burke also worked at parks around the Washington D.C. area before returning to Erie.

"Asbury has those natural elements that people try to model in the bigger parks around the world and I think that is one of our biggest strengths. We are a true gem for Erie."

While the park provides educational programs to over 11,000 students a year, the community also benefits. Nearly 20,000 people take part in the community programs offered by the nature center. Aside from the structured programs offered, Asbury Woods, Asbury Park, and Brown's Farm are open for a multitude of outdoor activities free to the public.

"This is a place to go run around the woods, play in the creek, ride your bike, explore… it's about quality of life. I think it's important," Winslow said. "This is an escape. A lot of evidence suggests that people who live near green space are healthier physically, mentally, and spiritually."

The area is broken up into distinct zones. The Nature Center's 50 acres are an education zone. There are no dogs or mountain bikes allowed, and the trails are shorter to better accommodate the educational mission. Across Asbury Road, the Asbury Barn/Park area, and Brown's Farm are recreation zones for running, biking and walking pets.

In the winter, the park offers cross-country skiing and snowshoeing.

"I think we have different user groups, age groups, interests," Burke said. "Exercise, bird watchers, greenway trail, the bridge, the grandfather tree, it is more than a tradition. I think that is one of the cool things about Asbury Woods is everybody can make it their own."

From the simple gift of one man, Asbury Woods has grown into a place for all to share and learn and escape. The thoughtfulness of Dr. Otto Behrend and the vision of all the directors and administrators who followed have created an oasis in a growing world where one can escape and rediscover their passions, collect their thoughts and reconvene with nature.

Asbury Woods is located at 4105 Asbury Road. From June 1 through August 31 the Nature Center is open Monday through Saturday from 10 a.m. to 5 p.m. Sunday from noon to 5 p.m.