The Lion in Winter at PACA provides an epic family takedown 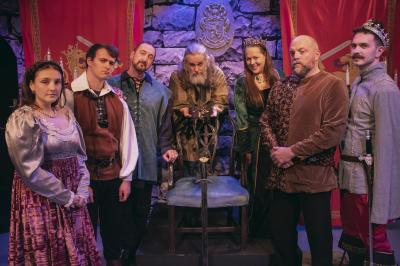 Just in time for the holiday season, The Lion in Winter is a show for the entire family to enjoy at PACA. Set during Christmas 1183, this witty period piece tells the wickedly amusing tale of King Henry II, his estranged and imprisoned queen Eleanor of Aquitaine (who is released only for the holiday), and their three entitled sons who are all vying for the throne in a double-dealing division of the kingdom. As the family gathers for the holidays, each member tries to make the indecisive king choose their option.

Directed by PACA Executive Director Mark Tannenbaum and Betsy Butoryak, the play features lead actor Rob Bush, who came out of acting retirement for his role as King Henry II. Bush is returning to the stage after a 15-year hiatus to play this bucket-list role alongside cast members Karen Schelinski, Matt Fuchs, Rob Karney, and Michael Haas. The cast also features two newcomers to the PACA stage: Olivia Lozano and Luke Scribner. PACA provides an intimate setting to see these actors at their best with each seat featuring a great view of the action, less than two feet from the stage.

"The Lion in Winter was also a very famous 1968 movie starring Katharine Hepburn and Peter O'Toole. It won Hepburn an Academy Award for Best Actress, as well as Oscars for Best Writing and Best Score (John Barry). James Goldman, who wrote the play, also wrote Follies, and is considered Broadway royalty," said Tannenbaum. Told in "marvelously articulate language, with humor that bristles and burns" (per the Los Angeles Times), The Lion in Winter is a play that transcends the historical genre to become a bitingly hilarious family drama.

"This play is as close to Shakespeare as you can get," said Tannenbaum. "It's about love, succession, it's incredibly funny, and just a great family-friendly holiday show." — Amy VanScoter