How a Teotihuacan woman's skull traveled from the Valley of Mexico to Erie, PA and back again 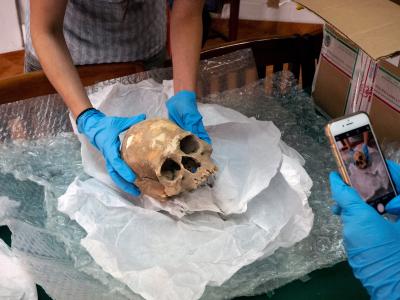 This 1,800-year-old Teotihuacan woman's skull spent 30 years stowed away in Erie Art Museum storage, only to resurface during a 2018 inventory.

"When I was in Mexico in 1964-1965, I met two young men — brothers — who owned a farm immediately outside the archaeological zone at San Juan Teotihuacan. […] Even though it was prohibited by law, they used to dig on their farm, and they found many things. Some, I purchased."

So begins the story of how an 1,800-year-old Teotihuacan woman's skull found its way into the storage rooms of the Erie Art Museum, according to the notes of the collector whose bequest would land her there.

James D. Baldwin, born and raised in the Erie area, was a globetrotting bon vivant. Always an art lover, he learned about museum practices and art collecting under the tutelage of Kansas City's Nelson Atkins Museum director and former "Monuments Man" Laurence Sickman. Ironically, Baldwin would commit a crime in Mexico that Sickman and other Monuments Men had worked to prevent in Europe and Japan during World War II: the theft of cultural artifacts from their nation of origin.

The 1960s brought a fascination with Mexico to American hippies, rockers, and artists, and the country became a popular vacation destination. At the same time, political and social turbulence was simmering. Mexico's "Dirty War" began in 1964 — the time of Baldwin's trip — as an internal conflict pitting guerrillas, student protesters, teachers, doctors, and farmers against increasingly oppressive and violent federal and local governments. The nation had recently elected a strongman president who implemented oligarchical policies that favored wealthy corporations and landowners over Mexico's middle, working, and peasant classes. Mexico's family and community farms were especially hard-hit as their land and livelihoods were taken away and given to corporate farms whose owners politically and financially supported the authorities.

It's not surprising, in circumstances like these, for people in increasingly desperate situations to find alternative methods of getting by. And in places like the Valley of Mexico, that have played home to important and wealthy cultural groups for generations, the emergence of subsistence digging is not uncommon. Subsistence digging is the practice of digging up archaeological objects and selling them for profit. It happens all over the world. This was likely the reason that the brothers Baldwin described were digging for artifacts on their farm.

As Baldwin's records noted, he was watching the brothers work one day when they found the remains of an ancient house, dug through its floor, and discovered a burial beneath it (in-home burials were a common practice at Teotihuacan, and across the Americas). They sold the skeleton's skull, a few vertebrae, and some other artifacts to Baldwin, who would illegally take them out of Mexico to keep in his personal collection.

Upon his death in the late 1980s, Baldwin bequeathed a large portion of this collection to the Erie Art Museum. This bequest of hundreds of objects would form a foundation of the EAM's collection. Among the donations were excellent examples of East Asian art, modern European works, and the Teotihuacan skull and artifacts. At the time the objects from the bequest were delivered, then-director John Vanco had refused the skull, saying it had "no place in an art museum." However, it got lost in the shuffle, and remained wrapped up and tucked away in a storage room for 30 years.

In 2018, when the recently deposed Joshua Helmer took charge as director, one of his first edicts was to complete an inventory of every piece in the museum's collections. It was during this inventory that the skull resurfaced.

Edinboro University professor and forensic artist Michelle Vitali was called upon to help determine the age and origin of the skull. At the time of the call, she was in Belize surrounded by Mayanists, as she was assisting at an archaeological dig. Upon reviewing a few photographs sent via email by the museum's registrar and discussing the matter with the experts around her, she assured the museum staff that the skull was ancient, and not the result of anything — recently — nefarious.

Around the same time, museum staff searched their own records, and found the documentation from Baldwin's bequest which explained the origins of the skull. Vitali says the museum offered to give her the skull, but she refused it, citing the moral and legal obligations surrounding the issue. According to law, all Mexican and pre-Hispanic artifacts found in Mexico are property of the state. Instead, Vitali encouraged the museum to repatriate it.

Two former museum staff members I spoke with were unaware of this offer, but agreed that Helmer treated the matter as urgent, wishing to remove the skull from museum property as quickly as possible. One former staffer even referred to Helmer's attitude towards it as "self-righteous," yet said that he "encouraged jokes about it," and promised staff a "tequila party" once it was on its way back to Mexico.

Regardless of how Helmer's administration handled the matter, the skull and artifacts were ultimately turned over to the Mexican Consulate in Philadelphia. The consulate put out a press release celebrating the cooperation between the Erie Art Museum and the Mexican national government in the return of the Teotihuacan skull and artifacts. Consul of media and public relations Carlos Enrique Torres Corona called the return of the remains from the Erie Art Museum a way of "building bridges, not walls."

From the consulate, the skull was sent via diplomatic pouch to Mexico City where it remains today in the custody of INAH, Mexico's Instituto Nacional de Antropología e Historia (National Institute of Anthropology and History), approximately 40 miles south of where the woman the skull belonged to had lived and died. While INAH does not yet have plans for her remains — whether they will be put on exhibit, remain in their collection for research purposes, or be reinterred — at the very least she has gone home.

Mexican consul of media and public relations Carlos Enrique Torres Corona called the return of the [Teotihuacan skull and artifacts] from the Erie Art Museum a way of "building bridges, not walls."

Throughout the course of following the journey of this skull, I have learned a few things about this Teotihuacán woman. She had probably lived in a communal arrangement with her family. She was probably an artisan of some sort, as the places where her neck and shoulder muscles attached to her bones were well-defined, and the city of Teotihuacan was broken into ethnic neighborhoods that specialized in particular crafts. She was over 35 when she died, but probably under sixty. In May of this year, another piece of her puzzle will come to light, as Vitali's forensic reconstruction of her face will be put on display, along with a number of other works by forensic artists and students at the Raymond M Blasco, MD Memorial Library.

Rachel Harris-Huffman is a writer, artist, and art educator based in Albuquerque, NM. Originally from Bradford, PA, she graduated with a BFA in Fine Art from Edinboro University of Pennsylvania, and continued with additional studies in Arts Management at the University of New Mexico. She is currently writing a book about the repatriation of looted antiquities. She can be reached through her Patreon page, patreon.com/3000MilesFromHome