A Little More Than Something

Basement Transmissions hosts Something More for all ears to enjoy. 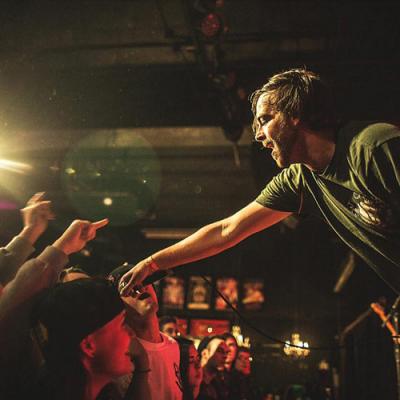 With Erie being so open and welcoming to all kinds of artistic and musical talent, it's no surprise that bands continue filing through to leave their mark on the city. September has already had a promising line-up of artists, music, and festivals — and it's not quite over yet. If you can find it in yourself to let your guard down for the night and let the music feed your spirit, then you want to make your way down to Basement Transmissions on September 28. Hailing from Bel Air, Maryland, pop-punk prodigies Something More will be headlining the show at BT along with Madison, Indiana alternatives Weekend Classic.

Something More released their album, Dogs Pt. II, in April of this year. Their sound can be called a modern update to mid-2000s pop-punk/emo bands like New Found Glory, The Starting Line, and The Red Jumpsuit Apparatus. Vocalist Tim Jagielski, guitarist Phil Rasinski, bassist Chad Nunnally, drummer Brian Rasinski, and guitarist Nate Swartz grew up playing together, so in 2011, they decided to officially pitch their ideas and their music to the world. In working with Catherine Yi of Common Ground Records, these five men have been making serious moves.

Weekend Classic has also been working hard and showing results. Winning this year's Ernie Ball: PLAY Warped contest was a huge success for this four man band, as they beat out 11,000 other contestants. While they possess a slightly darker sound, Weekend Classic would be considered more of an "emo revival" band. They're perfect for fans of Balance and Composure, Funeral For A Friend, or Story of the Year.

With an evening hosted by Heel Heat Productions, it is sure to be a night full of a lot more than just something. ARCHWAY — out of Greenville, Pennsylvania — and Titusville's own, Dear Brutus, will also be performing. Come support Something More, The Weekend Classic, ARCHWAY, and Dear Brutus for a night that will, for sure, rock your socks off. — Maddie Hepler