by Charles Brown
View ProfileFacebookTwitterInstagramRSS Feed
November 14, 2022 at 9:00 AM 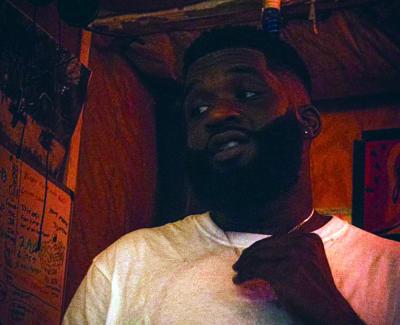 Local rap artist Grizz has been penning rhymes since his adolescence, creating his first song at the tender age of 12. But because making music was recreational, his craft wasn't taken too seriously until more recently. "I made my first song at 12 or 13, but didn't really get super into it until I turned 21 because I started to grow as an artist," admits Grizz.

Since those years, Grizz has been in the studio delivering verse after verse with his producer/engineer Anthony Rogers, who is also a rap artist. Leveraging the chemistry of their long-time friendship, this dynamic duo is able to effortlessly produce countless songs, contributing to mixtapes and Rogers' solo works. Even with so much experience in the studio, Grizz has yet to give Erie his own body of work, until now. Too Many Scary Movies will be the sum of Grizz's journey thus far, as well as the beginning of a new one. With the debut being a Halloween season release, the latter part of 2022 will be in for a treat.

The intriguing title comes from the rapper's fascination with scary films. "When I was younger, my dad would always watch horror movies," recalls Grizz. "And being a kid, you want to hang out around your dad, so I would sit and watch. I mean, I was scared to death. But I grew to love and enjoy them. So, I wanted to bring my love of horror movies over to my other love of music and make something special."

Appropriately, most of the song titles from Too Many Scary Movies are named after horror classics such as "Child's Play," "Candyman," and "American Psycho." The themes explored throughout the project are having fun, rap dominance, being braggadocious, and cultivating an appetite for success. Grizz holds nothing back and allows himself to show people why he should be considered a superior emcee. It's all in good fun, though, and a celebration of releasing his first solo project. "It feels great honestly because I've been making music since I was 13 years old," says Grizz. "Now at 28, I take it way more seriously and I've gotten way better as an artist. I knew it was finally time to get something solo out."

Too Many Scary Movies is definitely a vibe for those looking for something refreshing. Presenting itself as more of a red carpet introduction than an in-depth autobiography, the project invites you to have a good time from beginning to end. To hear Grizz tell it, you can expect no skips. "I want them (the listeners) to feel a rollercoaster of emotions like when you're watching a horror movie," states the rapper. "It's a fun project and I want people to enjoy themselves when they listen."

Grizz also notes that no matter what time of day it is, locking in on music with Rogers is an extreme pleasure. "Ant (Rogers) is my brother, so it's much more than just him producing and engineering my music. We've got a real life bond and friendship which makes making the type of music we make easy for us. Whether it was a late-night session, early morning session, middle of the day, or whatever — anytime I'm in the stu' with my brother, it's always enjoyable."

Many artists can be hesitant about putting out their work, for various reasons that those who are not artists may not understand. But when the time is right, the art becomes worth the wait.

Congratulations to Grizz, and judging by his work ethic, we can expect more from both him and Rogers in the future. But for now, let's allow this first project to settle in with us. You can listen to Too Many Scary Movies on all music streaming platforms, but only if you dare!