Turns out that bashing your newly purchased product is a bad idea. A really, really bad idea. 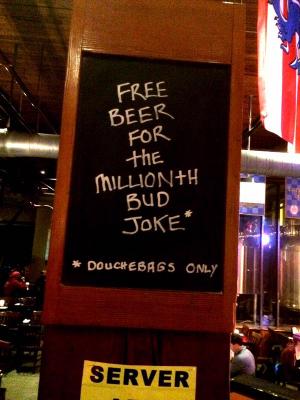 Is Seeking Out: Pumpkin Peach Beer

These were just some of the responses on Tweets and Facebook posted within minutes of Budweiser's Super Bowl commercial. No, not the one with the cute puppy and horses…the one where they railed against craft beer and their "fussy" beer drinkers…

This ad touts that Budweiser is proudly a "Macro-beer, that is brewed the hard way, isn't brewed to be fussed over, brewed for drinking, not dissecting," and to let the beer snobs, "sip their pumpkin peach ale, we'll be here brewing up some golden suds."  All while telling us that, "This is the only beer beechwood aged," and showing us iconic craft beer imagery such as hops, malts and brew kettles.

But this specific commercial that Anheuser Busch chose to spend millions of dollars airing during the Super Bowl had one huge flaw…especially when slamming that Pumpkin Peach Ale.

In an effort to quickly backtrack and reduce the social media buzz surrounding the commercial, Andy Goeler, CEO of Craft at Anheuser-Busch said this morning, "Elysian's brands are an important addition to our high-end beer portfolio, and we look forward to working together."

A new firestorm has now taken place against Budweiser on social media outlets with some craft breweries and their foot soldiers ready to storm the beach, while others are sitting back to watch as the war unfolds.

"I say to each their own, and I don't care what you are drinking, I care what I'm drinking," said one craft beer buff from an Erie Craft Beer thread.

While another said that, "I found it to be less offensive and more divisive. Harnessing the 'us and them' marketing techniques of politicians. The goal of that kind of message seems more focused on trying to keep an existing and dwindling customer base instead of converting new ones. 'Hey bro's and bro-ette's, appreciating craftsmanship and creativity makes you look like a douche. You don't want to look like a douche, do you?'"

Now, indeed craft beer sales have been eating away at huge quarterly profits from companies like Anheuser Busch/In-Bev and MillerCoors for a handful of years. So maybe it made sense to grab the proverbial bull by the horns and face the craft breweries and their supporters head on. After all, craft beer has been making fun of their "watered-down corn saturated beer" for quite some time.

Either way, as the craft beer revolution continues to grow – we can definitely count on seeing more head butting between micro and macro beers – and social media will be the moderator.