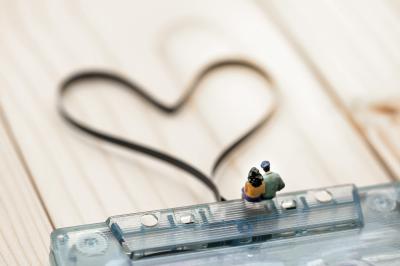 Love Songs. They're pretty much the basis for 99% of pop music. It's not just the Top 40 purveyors that have a monopoly on love or the lack thereof, however. We wanted to create a musical collage, with the theme of love being interpreted in different ways by different ears. Posing a simple question, we asked some key members of the local music scene to pick a favorite love song of theirs and let us know why. So here's a little mixtape from them to you.

It's a rediscovery of love many years later after two people have lived different lives, loved and lost their spouses, raised their children, and reached out for each other, thinking back to when love still had romance. It's sad, sweet and filled with that romance.

"Baby I'm yours" by Barbara Lewis

The song has a classic old-time feel, with lyrics that are simple and sweet, and music that is perfect for a slow dance.

"Shining Star" by The Manhattans

There are so many good choices, but when I really thought about what I've sung to girls in the past, this came to mind immediately. I wanted to add that this was a song I could picture each of my parents singing. The Manhattans beat out Nat King Cole and his daughter Natalie, as well as the Young Gunz [laughs].

Dave Defranco - Bassist of Hard Luck Story, The New Morning Sunrise, and Save Yourself

"She's Got You" by Patsy Cline

Describes a very specific brand of pain in a relatable way, and it's sung by one of greatest voices.

"No One's Gonna Love You" by Band Of Horses

that's tough! I think I'm gonna roll with this because that song gives me chills every single time I hear it. It really takes me back to when Zach and I were first dating and sharing special moments together. Still holds as one of my faves!

Carlos Rivera, Singer/guitarist of Mala Sangre and the Trotts

"I Want You Around" by Ramones

It's off of Road to Ruin and on the soundtrack to Rock 'n' Roll High School. I like the song because of the cadence during the chorus, and who doesn't want their significant other around. Touches the heart.

Brittany Morton, Singer of The Groove

"I Will Always Love You" - Whitney Houston

I pick this song because first, I love Whitney and The Bodyguard just touched me at such a young age, four years old to be exact! Secondly, you can feel the emotion in the lyrics – of loving someone even though you aren't together anymore – and wishing them well. This song is now a highly requested number for me to perform.

"First Day of My Life" by Bright Eyes

This is my favorite love song because the lyrics are an amazing piece of poetry that truly captures the feeling of love. It should be played at every wedding for all time!

"Tougher than the Rest" by Bruce Springsteen

I just finished Bruce Springsteen's brilliant autobiography, Born to Run. It shook me in the best way to see The Boss – the picture of masculinity – write with intense vulnerability writing about falling (and staying) in love with his wife, Patti Scialfa. This captures that vulnerable feeling of knowing you've found real love but still being afraid to give your heart up. They perform it as a smoldering duet in Springsteen on Broadway.

"Lovesong" by The Cure.

Sheesh okay, so I'm not really one for love songs, but if I had to pick a favorite it would totally be this. It's a reluctant love song in some ways – super straightforward and predictable lyrically, but ironically doused in – and driven by – melancholy, musically. It's kind of tongue-in-cheek, almost like an anti-love song, and that's what I like about it. Cotton candy-fingered love songs aren't really my thing.

I first heard this song at 15 years old, it's a song that has grown with me and meant many things through different relationships – including my brother, ex-boyfriends, best friends, and my father. No one wants to be alone, and it's a song about being there for someone, through life and death. Anytime I play it, or just listen to it, it never gets old.

I choose this song because it is relentless, progressive in its use of sampling, both experimental and listenable and in my opinion, is just plain fantastic! I love that the vocal processing and I think it was produced by using a kids karaoke machine. Blanck Mass is half of the electronic duo Fuck Buttons that records in a similar nature but has not released any music in four years.

Adam McKillip, Singer/Songwriter, Mandolin player of The Probables and Smilo & The Ghost

It's by You + Me(Which is Dallas Green and Alecia Moore "Pink") the song is called You and Me. The chorus is: "And they say everything it happens for a reason." You can be flawed enough but perfect for a person, someone who will be there for you when you start to fall apart, guiding your direction when you're riding through the dark, oh, that's you and me." It's a beautiful song that shows even if you feel flawed you are deserving of love.

"Rhapsody on a Theme of Paganini" by Sergei Rachmaninoff

"I don't have words for this piece of music."

Through thick and thin, this song has always been the perfect way to be reminded about what is most important in my life.

"One and Only" by Adele

This is my favorite love song because – for me and my wife –  it's "our song." It tells the story of letting your defenses down and giving the unexpected a chance, to prove they can be the best thing that ever happened to them.

"The Ballad of Love and Hate" by The Avett Brothers

Everyone craves love, seeks it out, is desperate for it. When you don't have it in your life, if you've had it then lost it, those times can be dark and scary. I feel this song gives hope that those dark times are only temporary.

"Cause I Love You" - Lenny Williams

This song has so much passion and soul – how could you not sing with it. Also,  and my lovely girlfriend of 16 years would slow dance and sing this song together when we were teenagers.

Adam Holquist - Keyboard player and multi-instrumentalist for and The LEC

"The Luckiest" by Ben Folds.

Ben Folds has written plenty of songs that are goofy and even downright . But he's also written a solid handful that I can't hear – or even think too hard about – without getting choked up. And most of them are decidedly NOT love songs. But this is a song about finding your person, that's also somehow about death and failure and the melancholy of marveling at how easily things are that could have not been, instead. And love songs that are not just love songs are the best kind.

"I'll Be Your Sister" by Motörhead

A wise man once said, "If you don't like Motörhead, fuck you". That wise man was me. Dirty and beautiful, Lemmy cuts right to the chase on this tune. No frills, no flowers, right to the meat of the matter.

(note: due to publishing constraints, some of these tracks did not appear in the print edition)