A Momentous Milestone For a Local Art Treasure 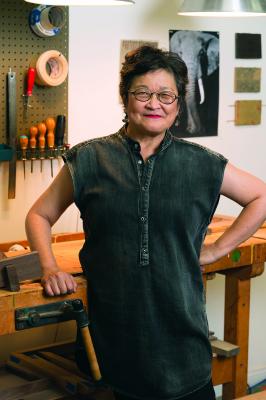 Contributed Photo
Wendy Maruyama, juror of the 95th Spring Show, brings a wealth of experience to the table as an artist, furniture maker, and educator.

Wendy Maruyama sits in diffused light at the south end of the Hagan Gallery of the Erie Art Museum. Volunteers pad softly around the room providing a soft undercurrent of audible rhythm in the lively but hushed room. Everyone is wearing gloves as they transport works from stacks against the wall toward Maruyama. It is at once a chaotic, but well-organized bustle of activity. The jurying process for the 95th Spring Show is in full swing.

Maruyama, an artist, furniture maker and educator, seems to be enjoying herself as she brings the eyes and heart of someone with more than 40 years of innovative craftsmanship to bear on the 643 submissions to the show. She leans forward, squinting to examine details, leans back in her chair with folded arms to get a larger view. She asks for titles, knits her brow at one work, and rests her chin in her hands at others. Her ruminations only last a short while with each presentation and then it's "yes," "no," or "maybe."

The volunteers quickly move away, stopping at another table to announce each work's fate to other volunteers and then head in different directions depending on the judgment the work they're holding received.

This efficient procedure has been developed over the past near-century with staff and volunteers alike having honed the jurying process into an art itself. The in-person event is, in fact, part of the revered lore of the Spring Show; most jurying in the art world today is done via computers, with artists sending digital images of their works to jurors for review. .

For John Vanco, former Executive Director of the Erie Art Museum, the in-person process held many advantages. "First, it's fairer to the artist and the juror. Details and scale are much more obvious and works in two and three dimensions don't suffer the way they might if the photograph used to present the work is not the best quality. Plus, it's a far more satisfying process and then, once complete, the curator knows exactly what there is to work with."

"The in-person jurying makes the local drop-off a community event. Artists may see each other for the first time in a while and the process can discourage those farther out of town from submitting, which gives the show a more local feel."
Susan Barnett

She also thinks that seeing the works in person lets the juror examine the material and craftsmanship in a more realistic way. "The works really present themselves as objects."

Is she apprehensive about taking the reins from someone who has been curating Spring Shows since 1969? No, not really.

Vanco, who says he won't miss working on the show, has great trust in Barnett. "I have no qualms about the Spring Show going forward. I'm sure she'll change things but that's a good thing. Fresh insights keep things evolving."

Barnett's fresh eye will build on the work Vanco accomplished in the past 49 years. To really see how the show evolved, a dip into the institutional memory of the organization is in order.

The annual "Exhibition of the Artists of Erie" began in 1923 at the Erie Arts Center, predecessor to the current museum, and was organized by the Art Club of Erie. Catalogs from some of the early years show us that awards were given, and the jurors were a team of local art patrons. 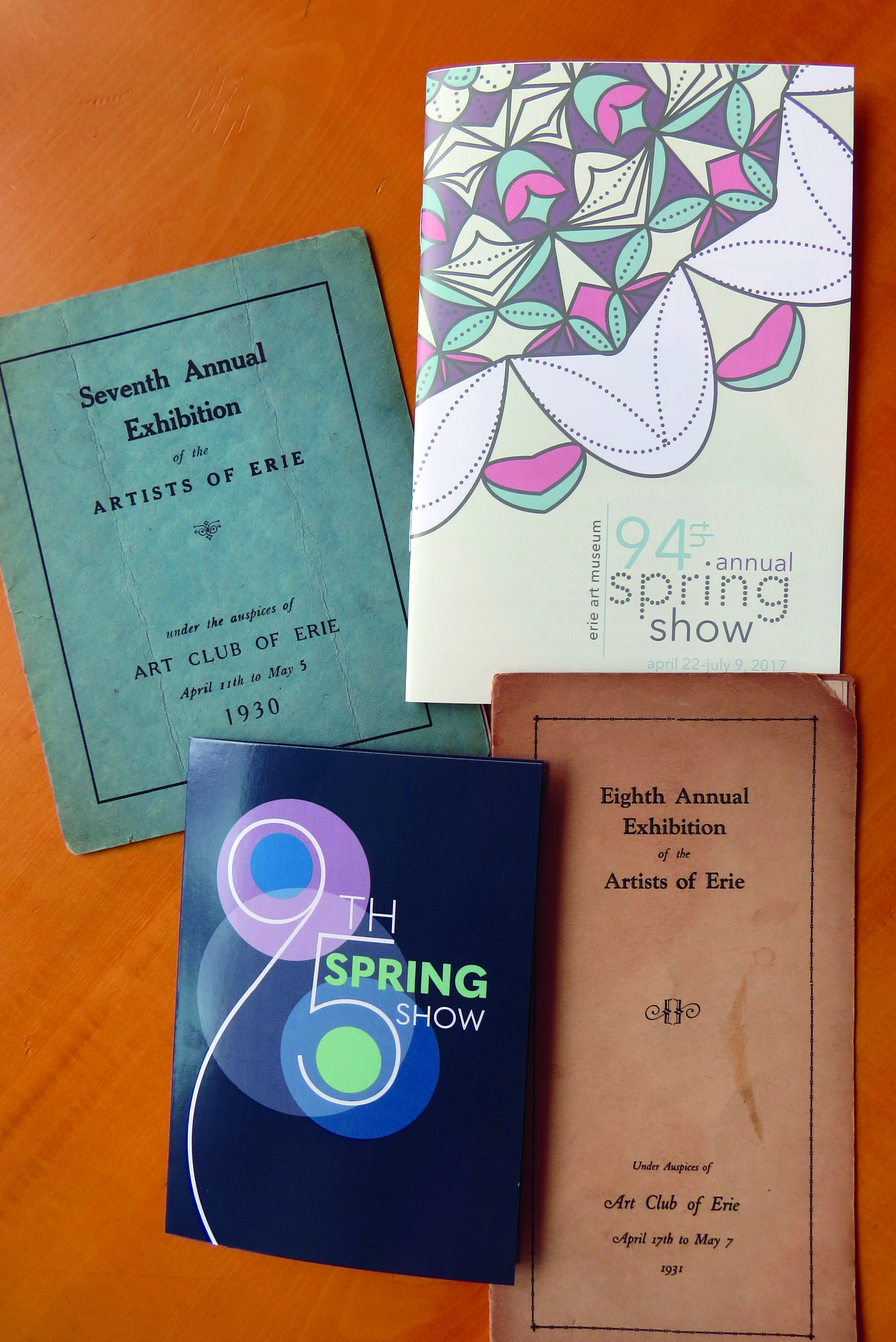 The Spring Show has come a long way from its origins as the Annual Exhibition of the Artists in Erie, expanding both in scope and radius of eligibility, opening up to artists as far as 250 miles away.

In a fascinating tidbit, the 1931 catalog, the eighth annual show, reveals that Catherine Burns Plavcan bests her much more famous husband, Joseph Plavcan with a "First Award." He received a First Honorable Mention that year.

Of course, Vanco didn't arrive on the scene until 1969, but he saw the first "May Show" in 1968 when he was working as a journalist for the Erie Daily Times. "I reviewed it, and I remember that it had some controversy as it contained a painting of a nude man in a bathtub."

By the following year, the Erie Art Center had hired Vanco to be the first director. He renamed the May Show the Spring Show because he wanted to open it earlier, in April. He also expanded the radius of miles from which artists could contribute from 75 miles to 250, despite initial protests from locals. This brought in a wider diversity of talent to the show and as the years progressed, the Spring Show had developed a reputation for attracting quality work.

What also helped grow the quality of the show was recruiting the luminaries of the art world to jury the show. One, Marcia Tucker, was founder and director of the New Museum of Contemporary Art when she juried in 1983.

Jurors often came in skeptical according to Vanco. In fact one, gallery owner and dealer Bernice Steinbaum, said to him that she had high standards and remarked, "You might only end up with one work." It turned out she was pleasantly surprised, as most others were as well.

Having jurors from larger communities and markets gave the museum an opportunity to showcase regional talent to a wider world and gave staff the opportunity to work with notable professionals in the field. "There have been many great jurors," says Vanco. "Recently Sergei Isupov and William Wegman were great jurors and wonderful to work with."

Another innovation that spurred interest by artists was the instituting of a purchase patrons' program where collectors agree to acquire a work from the show. This year that means $12,500 in guaranteed purchases. An additional $15,000 in cash prizes, including one from the Northwest Pennsylvania Artists Association, will also be awarded.

Some of those prizes will go to works chosen by Maruyama, who had a difficult task of winnowing down the collected works into a manageable show. "It was a true honor to jury such a significant exhibition … there were so many stellar submissions that it became an issue of rejecting work not because it was poor, but because the space has limits," she remarked in an email. "Sometimes I had to really shift the strategy on my evaluation process. For example, if there were three paintings I loved but each had, let's say, crows, or trees as a central element, it came down to choosing the strongest depiction overall." 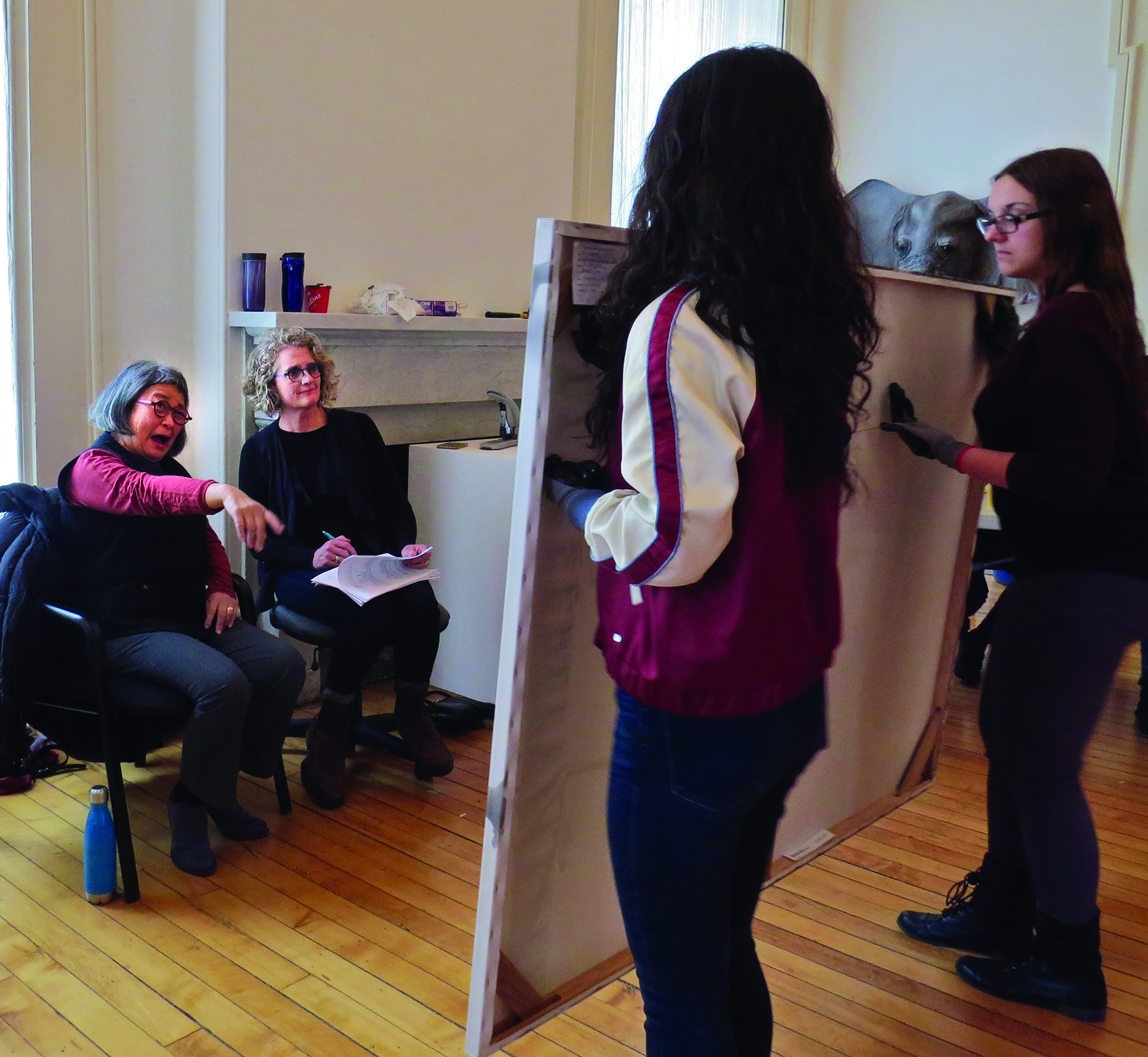 And Maruyama also gives us other peeks into her approach by writing "as a craft person I am mindful of how well things are made, whether it's painting or sculpture. At the same time I tried to evaluate the use of 'appropriate' craftsmanship — work made with found objects have a different patina, so to speak. But if I am distracted by it, then that is how I may come to a decision."

Her words reveal how the varying approaches or emphases of jurors over the years have shaped the Spring Show in distinctive ways, giving each its own flavor. This, for better or worse, keeps the show fresh and new each year and one that is eagerly awaited in the community.

Erie will get to see the 95th show on April 22, when it opens to the public. Until then, the staff of the museum is busy with post-jurying logistics. Barnett is excited about installing her first Spring Show. "For me, as a new curator and Erie resident, the Spring Show is a fantastic opportunity to get to know the artists and their work. I look forward to laying out the show and exploring groupings by theme, medium and color until we find relationships that work. I do envision certain very strong works as central elements in various areas of the gallery."

And she has reason to be excited to be part of the rich and storied tradition that is the Erie Art Museum Spring Show. The show has, in many ways, been the harbinger of spring, a re-awakening of the regional art world, an opportunity for artists to show off what they worked on over the winter.

But as Barnett wisely points out, the Spring Show is "more than just an exhibition or a contest, the Spring Show brings artists together in Erie and the region. Artists of all ages and backgrounds stop by during the drop-off period to see one another's work and offer support. The reception is a reunion for artists and a celebration that connects them to the community."

So, as an interesting and rewarding Spring Show is at hand, let's celebrate the Erie Art Museum as it reaches this remarkable milestone. And let's all look forward to the 100th and many more after that from what is clearly a local treasure. Erie would be far poorer without it.