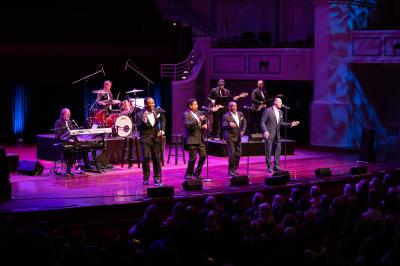 Some say that the day after Thanksgiving is the official start to the Christmas season, but the Warner Theatre plans on kicking off the holiday season a little early this year with some Motown magic. The soulful sounds of the Motor City roll into town for A Motown Christmas, which is assembled from past and present members of various legendary Motown groups. This performance will features former members of The Temptations, The Miracles, and The Contours singing some of those classic Christmas tunes that have become as much a part of season as snow, sleigh bells, and Santa Claus.

Tradition is one thing that brings us together with those we love, and for many, holiday music is another shared bond. "Joy To The World," "White Christmas," and "Rudolph the Red-Nosed Reindeer" are some of the classics that were featured on the first A Motown Christmas compilation album released in 1973. Even though it's been almost 50 years since that album, those songs have grown to become a part of our lives. With a legacy spanning decades, this is a family friendly event that encourages everyone to bring their holiday spirit and sing along to their favorite melody.

Along with the aforementioned seasonal staples, you can also expect to hear some of Motown's greatest overall hits, with members of each vocal group carrying on the custom of dressing to the nines. This tradition, along with spectacular choreography and amazing harmonies, have become synonymous with the Motown moniker. A Motown Christmas will get you out of your seat and into the holiday spirit, with a little help from the sound of soul.