Rev. Jeffery Brown on giving a voice to 'the least, the lost, and the left out' 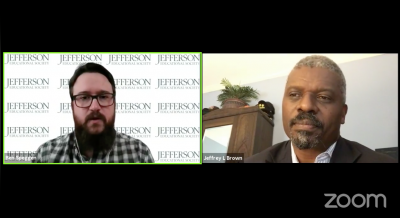 During the Jefferson Educational Society webcast "A Conversation with Rev. Jeffery Brown: Race in America and Today's Black Lives Matter Movement," an audience member asked the featured guest what Erie's prescription for peace might be, given the painful splits and ruptures within our community and countless others. How might we suture our societal wounds and medicate the underlying infection?

Although he is a highly regarded preacher, speaker, and activist — and one of the main architects of the "Boston Miracle" in which youth homicides dropped an incredible 79 percent over the course of a decade in the Massachusetts capital — Rev. Brown is no doctor. However, he has gleaned plenty of wisdom from his groundbreaking work throughout the 1990s and beyond — then as a concerned clergy member walking Boston's most violent neighborhoods late at night and interacting with troubled youth directly, now as president of Rebuilding Community Around Peace (RECAP) and co-founder of My City at Peace.

His prescription? In a word, inclusiveness. Boston began to heal — at least for a time — when he stopped viewing the perpetrators of crime as foreign bodies and started looking at them as part of the same body.

"There was a segment of my community I was excluding from my definition of community," Rev. Brown admits. "We were able to come up with some pretty innovative ideas because we stopped looking at the youth as the problem to be solved and started to see them as some of the most creative, intelligent, insightful people that we'd met."

Through their conversations, meaningful partnerships were formed from "the bottom up;" that is from the street level (between gang members, gang unit officers, and faith and community leaders) up to the higher tiers of government and law enforcement. "It was really everybody;  traditionally conflicting constituencies coming together for a cause that was much bigger than them."

Subsets of communities — whether one categorizes them by race, class, creed, or whatever — need to shed narrow, individualistic, and oppositional mentalities before true change can be affected.  "It's not a matter of one versus the other; it's a matter of perspective and understanding," says Rev. Brown in response to cries of "Blue Lives Matter!" or "All Lives Matter!" at any mention of the  "Black Lives Matter" movement.

He likens it to the Biblical parable of the lost sheep. "You can imagine the [other] 99 sheep saying 'Don't our lives matter?!'" when the shepherd goes looking for that sheep. "But they're not in trouble, the one sheep is in trouble …. When there are those who are in trouble, who are in danger, who are threatened, we all need to focus on them, not just on our own." He quotes the late Dr. Martin Luther King, Jr. in saying "We're all tied together in a single garment of destiny."

But how do we tailor that garment to fit a more diverse and equitable society? If anyone wasn't aware of how disproportionate our class structure was before, they should be brutally aware in a 2020 wracked by riots, protests, and plague. One swollen arm is bulging out of its sleeve while an emaciated leg is struggling to prop up everything above it, quivering within a baggy pant leg. It's not a good look and it's not a sustainable structure.

"You have to think big at this point. This is one of those moments when doing things the way that they've been done will not work. And yes, there'll be resistance; people change when the cost of not changing becomes too great."

We can minimize those costs and maximize the value of our communities by acting now.